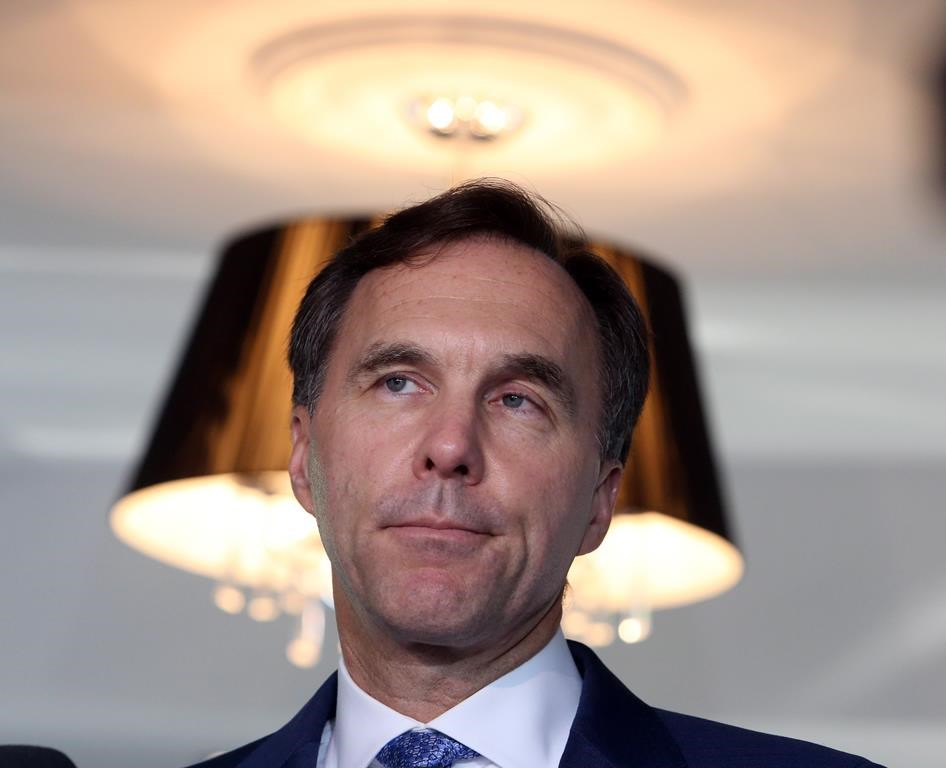 Members of the Canadian Chamber of Commerce say proposed tax changes for businesses by the federal government are casting business people in a negative light, and the finance minister should apologize.

"Whenever a process from government starts to position business people and the business community in such a negative light, it is an absolute disaster from a communications perspective and I think an apology from our federal minister to the Canadian business community would be appropriate," said Steve McLellan, CEO of the Saskatchewan Chamber of Commerce.

His comment came Saturday after members of the Canadian Chamber put their concerns directly to Finance Minister Bill Morneau at their annual meeting in Fredericton.

"Characterizing the last 45 years of Canadian tax policy as loopholes is insulting to businesses that have worked within the rules in good faith to build their businesses, to save for retirement, and sometimes just to keep their doors open," said Krista Ross, CEO of the Fredericton Chamber of Commerce.

There was a round of applause when Morneau was asked if he would consider an independent royal commission to take a broader look at tax reform, but Morneau said the government has been talking about tax reform since the summer of 2015, and expects the current input will lead to changes in what's being proposed.

"We know we're going to make changes. We've heard things from people that are going to be taken into account and the draft legislation, as proposed, will by definition need to be considered in light of the things that we've heard from people," Morneau told the crowd.

"I want to assure you that we are not doing this in order to end up in a situation that doesn't consider all those points of view. We're doing this to ensure we've got it right," he said.

McLellan said he thinks the current government is on a mission and will get the tax changes "come hell or high water."

Perrin Beatty, CEO of the Canadian Chamber of Commerce, warned the proposals could lead to "grave unfairness" for family farmers and small business workers across the country.

"We may very well find that it discourages entrepreneurship and investment in Canada and has damaging impacts on the Canadian economy," Beatty said in a presentation.

The tax proposals include restrictions on the ability of business owners to reduce their tax rate by sprinkling their income to family members in lower tax brackets, even if those family members do not contribute to the company.

Morneau also proposed limits on the use of private corporations to make passive investments that are unrelated to the company.

Another change would limit business owners' ability to convert regular income of a corporation into capital gains, which are typically taxed at a lower rate.

Many of the business owners say the proposed reforms won't let them save for a rainy day.

Fredericton car dealership owner John Clark said businesses like his had to put money away to survive downturns such as the recession in the 1980s and the impact of the introduction of the harmonized sales tax.

In Halifax, scores of Nova Scotia's doctors turned out for a meeting Saturday to sound the alarm about how the changes could impact health care in a province already struggling to meet the needs of an aging and sick population.

Doctors Nova Scotia, the province's medical association, found that of 864 physicians who responded to a survey, more than half said they would consider leaving the province if the tax proposals come into effect.

Several panellists voiced concerns that patients will ultimately pay the price if the measures are implemented, saying the loss of even a fraction of Nova Scotia's doctors could lengthen wait times for essential medical services.

"I see (these tax reforms) as the straw that's about to break the back of health care," Dr. Lisa Bonang told the crowd. "It's not about the money. ... We love our patients. We only want what's best for them. But our altruism will only go so far."

Bonang, who has been a family physician in Musquodoboit Harbour for 22 years, was overwhelmed with emotion as she pledged to continue practising in the rural Halifax community, despite feeling "dissed" by the federal government.

"I'm willing to stay and fight and do what's best for the health care for my community," Bonang said through tears.

Conservative deputy leader Lisa Raitt, the only federal politician to attend the Halifax meeting, accused the Liberals of driving "wedges" between doctors and patients.

"One of the most primary relationships you have is with your family doctor," Raitt said. "I trust my children to you. I trust my husband to you, my parents to you. I don't want to have a fight with you."

Morneau said he's listening to the concerns of doctors and others, and they will be considered.

"We're out listening to people and haven't concluded on the fiscal measures," he said.

Nova Scotia Premier Stephen McNeil told reporters Friday that he was concerned about the impact the tax changes could have on health-care recruitment in a province already dealing with a family doctor shortage.

— with files from Adina Bresge in Halifax.