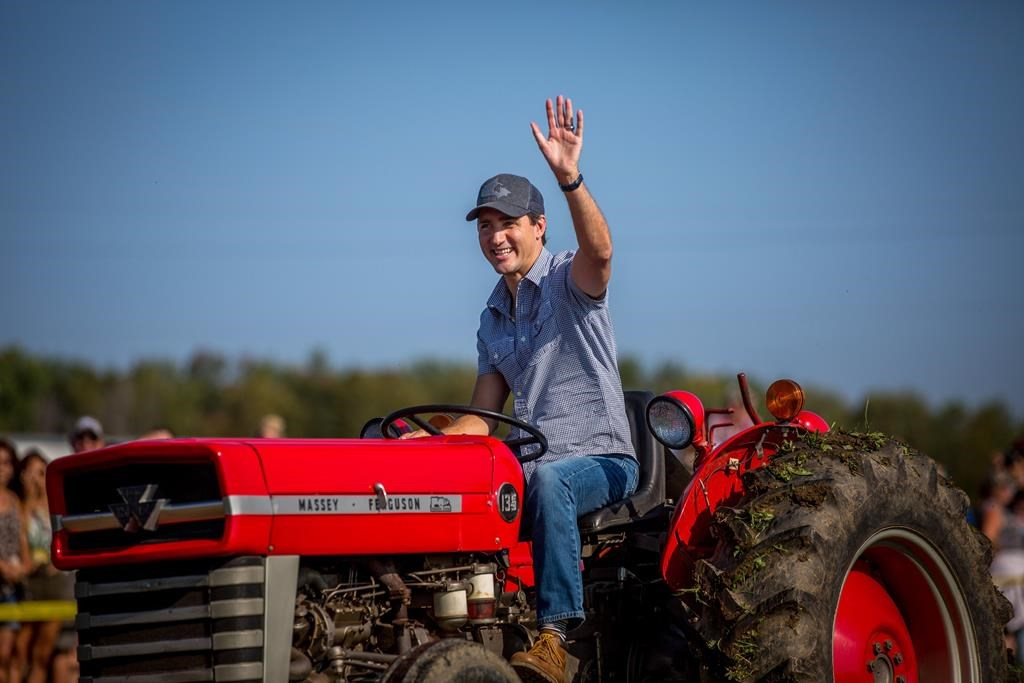 Justin Trudeau drives a tractor at the International Plowing Match and Rural Expo in Walton, Ont., on Friday, September 22, 2017. Photo by The Canadian Press/Chris Donovan
Previous story
Next story

Provincial pressure is intensifying against the Trudeau government's controversial tax-reform proposals, which have angered business owners, doctors and farmers across Canada.

Manitoba Premier Brian Pallister, flanked by business owners and a farmer, held an afternoon event in Winnipeg where he aired his frustration over the federal tax proposals.

On the East Coast, Nova Scotia Premier Stephen McNeil expressed concern that the changes could hurt his province's physician recruitment efforts and hamper the ability of small businesses to create financial cushions as protection during downturns. McNeil was scheduled to meet federal Finance Minister Bill Morneau later in the day to directly convey this message.

Out West, British Columbia Finance Minister Carole James said she didn't think Ottawa had consulted enough on an issue that has spread fears of the "unintended consequences" on small business owners.

The comments by the provincial leaders added to waves of complaints that have come from a range of sectors — as well as backbench Liberal MPs. Newfoundland and Labrador Premier Dwight Ball has also said he thinks the tax changes would hurt his province.

Morneau and Prime Minister Justin Trudeau have argued that the tax system unfairly encourages wealthy Canadians to incorporate, so they can get a better tax rate than middle-income earners.

They say the changes are meant to end tax advantages that some wealthy business owners have unfairly exploited and to ensure all Canadians have a level playing field.

But the federal explanations have yet to ease many concerns.

Pallister added his voice to the uproar about the potential damage he believes the changes could inflict on thousands of small- and medium-sized businesses and their employees.

"There is no room here for class warfare. The communications department in Ottawa have chosen to use language like 'loopholes, tax evasion' — recriminatory and accusation language that has no place in this discussion," Pallister said.

"These proposed changes will take millions of dollars out of the hands of Manitobans and deliver them straight to Ottawa."

In Halifax, McNeil urged Ottawa not to overlook the importance of these incentives for some small business owners and doctors who lack retirement plans.

"I've raised the issues that I've heard from Nova Scotians and I've raised my concerns that I have with them as well," he said of his discussions with Ottawa.

In Vancouver, James told business leaders after a speech that she believes in closing what Ottawa has described as "tax loopholes."

"But I also believe that there wasn't good consultation done," she said of the federal strategy.

The package includes restrictions on the ability of business owners to reduce their tax rate by sprinkling their income to family members in lower tax brackets, even if those family members do not contribute to the company.

Morneau also proposed limits on the use of private corporations to make passive investments that are unrelated to the company. Another change would limit business owners' ability to convert regular income of a corporation into capital gains, which are typically taxed at a lower rate.

On Friday, before his meeting with McNeil, Morneau said there was "some pretty obvious misinformation" circulating about the impacts of the proposals. Ottawa has been trying to bring clarity to the debate.

"Our objective here is to deal with wealthy people that are incorporating in order to find themselves at a lower tax rate than middle-class Canadians," Morneau said.

"Our goal, of course, is (a) long-term, fair tax system that provides a basis for people to invest, to make our country successful."

He added that, for example, only business owners who have annual incomes of at least $150,000 can really benefit from the passive income incentive.

The government launched a 75-day public consultation period in July, which ends Oct. 2. Morneau has said he's listening to feedback about the proposals and that he's open to making changes, if necessary.

Manitoba Finance Minister Cameron Friesen wrote Morneau to demand that he hold off on the tax reforms until after the provincial finance ministers meet him in December.

Late Friday, Winnipeg-area Liberal MP Dan Vandal said he was "completely surprised" that Manitoba's premier would join the national debate over federal tax proposals, which are still only in the consultation phase.

"It's not like the premier doesn't have work to do," said Vandal, who also noted Pallister's past as a federal Tory MP.

"He's still going to bat for the national Conservative party."

Vandal, who's been hearing concerns about the tax plan from his own constituents, said he expects Morneau to make changes to the proposals.

A vocal opposition has grown since Morneau first announced the proposals in the summer.

An organized movement has argued the tax incentives targeted by the Liberals are critical for Canada's economically crucial small-business sector. It insists the current tax structure is necessary for entrepreneurs, including those in the so-called middle class, who take personal financial risks when they decide to open a company.

— with files from Aly Thomson in Halifax, Geordon Omand in Vancouver and CJOB in Winnipeg