By The Canadian Press | News, Politics, Culture | September 28th 2017
#30 of 112 articles from the Special Report: State of Journalism 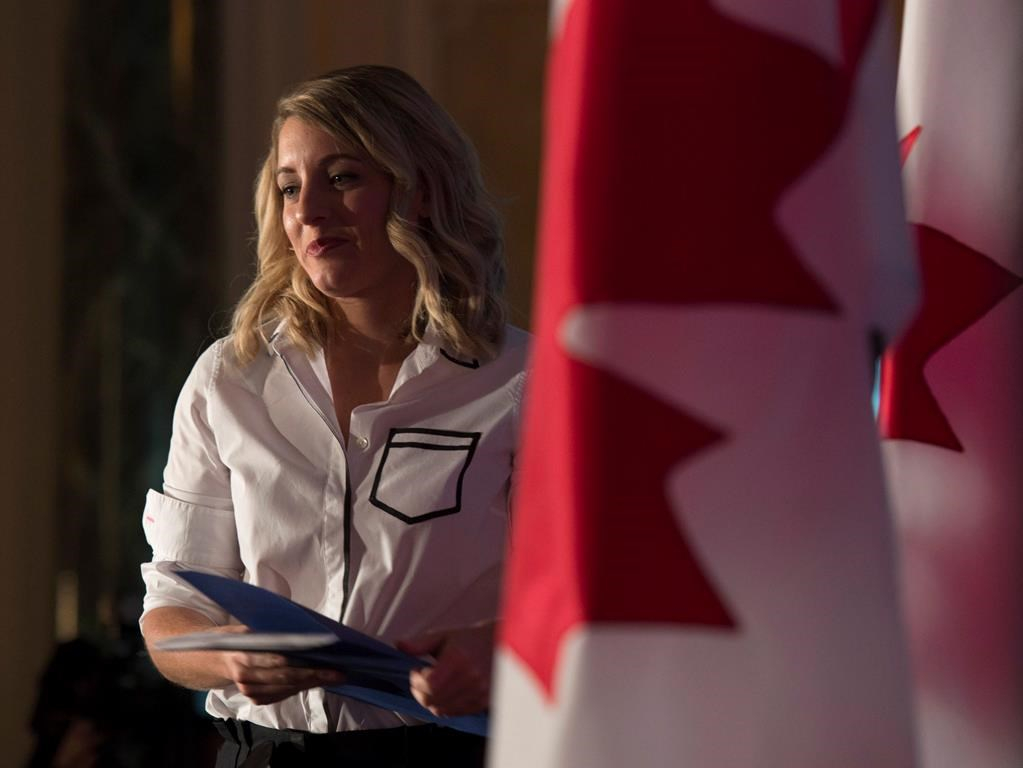 Minister of Canadian Heritage Mélanie Joly takes to the stage to outline the government's vision for cultural and creative industries in a digital world in Ottawa, Thursday September 28, 2017. Photo by The Canadian Press/Adrian Wyld
Previous story

Heritage Minister Mélanie Joly unveiled Thursday what she billed as a road map for the future of Canada's creative industries, but precisely where on the cultural landscape it will end up leading remained far out of focus.

The long-awaited strategy seeks to refashion for the digital age all of the pillars that support and regulate the country's famously fragile culture, but little of the change will become apparent overnight.

Instead, Joly is plotting a course that, over the coming months, aims to rework the myriad laws and regulations that govern broadcasting, telecommunications and copyright, as well as the private and publicly supported funds that back musicians, writers and publishers.

The mandate of the CBC is up for a refresh as well, while the government eyes a strategy for supporting local news as it makes its own transition to the online world.

"We will enact policies that help our creators and cultural entrepreneurs address the challenges of today's digital reality, and ensure that Canada’s voice will be heard loud and strong on the world stage," Joly said.

The government doesn't intend to go it alone. A $500-million agreement with video-streaming giant Netflix will see the company set up a Canadian branch of operations and invest over five years in original productions in Canada. They've also committed to $25 million to French-language content.

How much the company would have invested anyway is unclear. The company told the government that in 2016, it "commissioned hundreds of millions of dollars of original programming produced in Canada."

The new deal, however, was made under the Investment Act, meaning that if Netflix fails to hold up its end of the bargain, it could be fined.

It's the opposite of what many in the industry wanted to see: Netflix and other interested streaming companies contributing to the same content development funds that traditional broadcasters are legally obliged to support.

A spokesman for Bell Media suggested the $500 million over five years from Netflix is only a fraction of what Canadian companies are required to pay. Bell, for its part, spent $900 million on the 2017-18 broadcast season alone.

"Our total annual investment in Canadian content in 2017-18 is 9 times the average amount that Netflix would contribute yearly," spokesman Scott Henderson said in a statement.

Rogers invested more than $660 million in Canadian content last year, and $580 million the year before.

The government also plans to increase its own contribution to the Canadian Media Fund, though by how much is unclear. Taxing Netflix, or imposing additional taxes on internet providers that carry their content, just wasn't an option, Joly said.

"We went and got the biggest investment in the last 30 years in Canadian content from a foreign company and that we did to support our industry, to support our creators while not taxing more Canadians."

While the money, the investment and the support for Canadian stories is fantastic, it also leaves open a lot of questions about who controls the rules around Canadian broadcasting, said David Sparrow, the president of ACTRA, the performers' union.

"I think the question is, are we allowing them to write their own rules because they have deep pockets and they're investing this money?"

The federal government isn't just looking to Netflix to support Cancon; Joly made it clear she expects other tech giants to start doing some heavy lifting to actively support its development. She highlighted some initiatives underway by Google and Facebook; the latter will help fund digital journalism development in a new program with Ryerson University.

"My take here is that I can't believe that we are going to make policy just (making) deals."

The only major federal funding announcement in the strategy is $125 million over five years for a creative export strategy. That help is welcome, said Margaret McGuffin, executive director of the Canadian Music Publishers Association.

"Our music publishers have 75 per cent of their revenues coming from export," McGuffin said. "Anything that supports export means that Canadian songs are going to be heard around the world."

The chair of News Media Canada says the country's struggling newspaper industry is "on its own" thanks to a federal cultural strategy that all but snubs so-called legacy media.

Bob Cox had lobbied the government to grow the Canadian Periodical Fund, which supports magazines, periodicals and local newspapers, from $75 million a year to $350 million.

Rather than bail out industry models that are no longer viable, Joly says, the government will focus on supporting innovation, experimentation and the transition to digital platforms.

The new framework doesn't increase the amount of money in the fund, but will expand who is eligible to receive money, such as digital-only periodicals.

All that means, says Cox, is that more organizations will be fighting over an already limited amount of money.

He says Ottawa is ignoring an ongoing crisis in Canadian newsrooms, which are racked with layoffs as traditional sources of ad revenue continue to dwindle.

Is gamification the key to saving journalism?