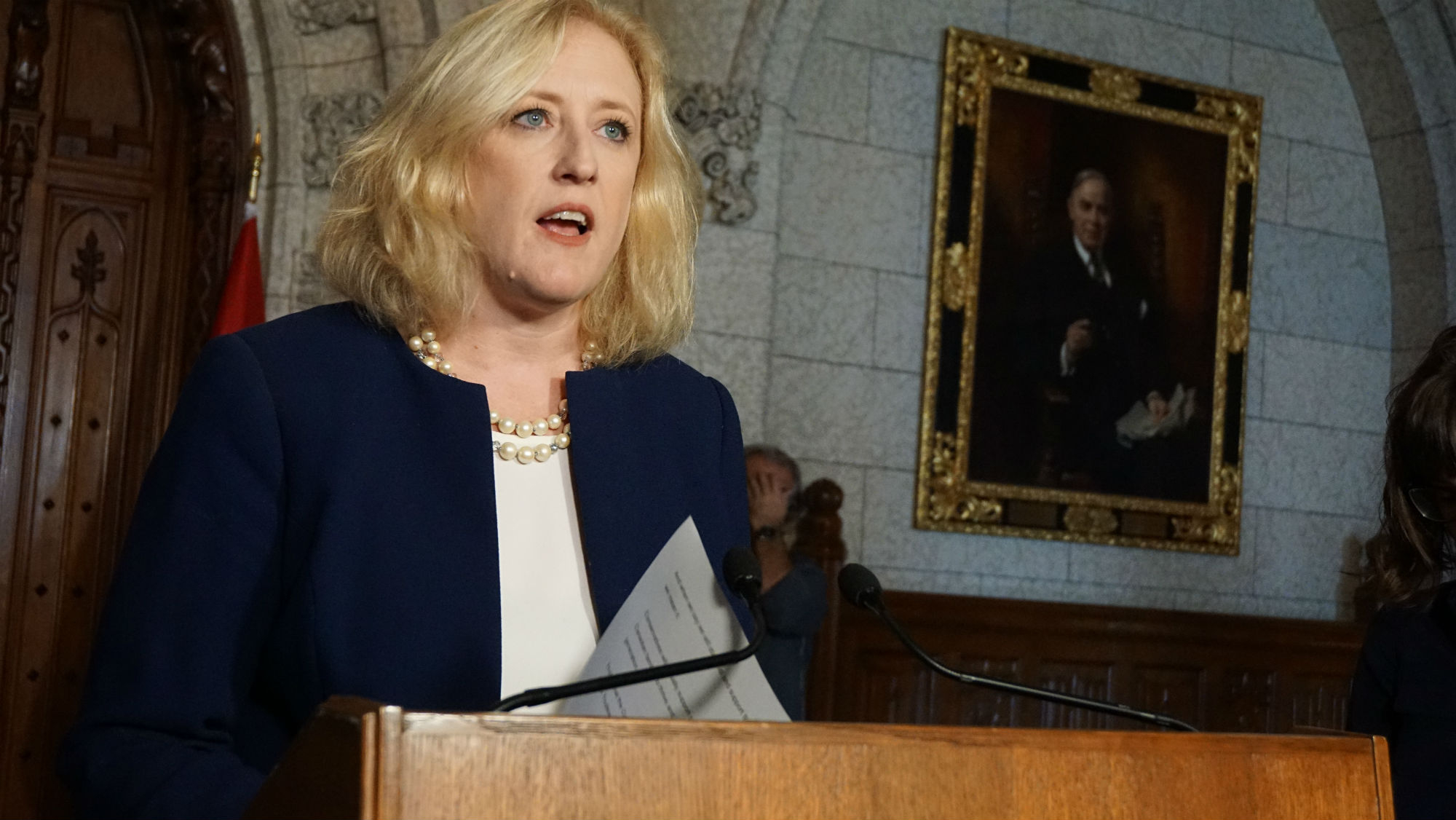 Deputy Conservative Party leader Lisa Raitt accuses the Trudeau government of "political interference" and "mismanagement" leading to the demise of the Energy East project in Ottawa on Thurs. Oct. 5, 2017 in Ottawa. Photo by Elizabeth McSheffrey
Previous story
Next story

The Calgary-based TransCanada Corp. announced Thursday the cancellation of its Energy East and Eastern Mainline pipeline projects, bringing more than three years of polarizing debate weighing their financial benefits with their environmental costs to a close. In a statement, the company said the decision would result in roughly $1 billion in losses and cited "changed circumstances" as its rationale.

Kristine Delkus, TransCanada's executive vice-president for stakeholder and technical services and general counsel, offered additional details in a letter that confirmed the withdrawal to the National Energy Board (NEB). The letter attributed the decision, in part, to the regulator's guidelines for its review of the project, which include an assessment of greenhouse gases generated by the fossil fuels to be transported in the pipeline.

"The Applicants have carefully reviewed the Decision and its implications. The Applicants have also considered the proposal from the Premier of New Brunswick for the federal government to fund and undertake an upstream and downstream greenhouse gas emissions (GHGs) analysis and the letter from Environment and Climate Change Canada (ECCC) offering its expertise and support for an assessment of upstream and downstream GHGs for the Projects," wrote Delkus in the letter, addressed to Sheri Young, the secretary of the NEB.

"Notwithstanding these efforts, there remains substantial uncertainty around the scope, timing and cost associated with the regulatory review of the Projects. There is also the question of jurisdiction that arises from the NEB’s Decision."

Her letter also mentioned that the projects were facing other obstacles, including anticipated delays from the regulatory process and their associated cost implications.

The Canadian Energy Pipeline Association (CEPA) also tied the cancellation to the NEB's recent decision about its review of the project. The industry association said it was "extremely disappointed" with Thursday's announcement.

A 'blow' to Canada

"The overarching issue here really is that there is uncertainty in the regulatory process. The real investment decision in all this is the decision to begin along the path of proposing and development the project, and going through the process. These projects have been subject to ongoing uncertainty in the regulatory environment and we're still right in the middle of that."

If approved, the $15.7-billion Energy East project would have have shipped up to 1.1 million barrels of oil per day, over 4,500 kilometres of pipeline between the Prairies and North Dakota to refineries and marine ports in Quebec and New Brunswick. It was supported by the governments of New Brunswick, Saskatchewan and Alberta, but opposed by Quebec.

Alberta Premier Rachel Notley called the demise of both pipelines "an unfortunate outcome for Canadians."

“The National Energy Board needs to send a clear message on what the future of project reviews look like in Canada," she said in a press statement on Thursday. "Our government understands that deliberation on upstream emissions and land-use integrity is important and must continue. Investors need confidence and we look forward to seeing that certainty in place soon."

With the cancellation of Energy East, Notley emphasized the importance of Kinder Morgan's Trans Mountain expansion pipeline, which has been approved by the federal government to ship oil from Alberta to the West Coast. That pipeline, however, is currently locked up in lawsuits, and the B.C. government is intervening in challenges to its approval.

New Brunswick Premier Brian Gallant, another longtime champion of the Energy East project, joined Notley in expressing disappointment with TransCanada's decision. In a statement, he sought to console job-seeking constituents who were counting on the pipeline's approval.

"... It is important to say today that, while we wanted to see the pipeline built, it is not the only opportunity our government has been pursuing to grow our economy," he said. "It is also not the only opportunity the government is pursuing for the Saint John region... We are going to continue to look for other export markets for energy, which would allow us to increase our generation, and we are going to keep an eye on world market conditions."

Outgoing Saskatchewan Premier Brad Wall, who has announced his upcoming resignation from politics in August, also came out swinging against the Trudeau government for Thursday's cancellation. In a lengthy Facebook post shared more than 2,500 times in less than two hours, he lamented the loss of jobs and revenue for Prairie provinces.

"For the west to continue on like this in our federal system is the equivalent of having Stockholm syndrome," he said. "The decision by TransCanada to cancel the Energy East project was made because of a lack of interest and leadership – or worse, intentional decisions and policies of Prime Minister Justin Trudeau and his government. He should answer for this. He needs to be held accountable for this."

As Energy East supporters lamented the loss of jobs and revenue, Indigenous opponents, environmental activists and a number of Quebec politicians celebrated. Its abandonment, they argued, means fewer climate-polluting greenhouse gas emissions in the air, reduced risk for sensitive land and water ecosystems, and respect for Indigenous sovereignty.

“It’s a good day for the planet really," said Regional Chief Ghislain Picard of the Assembly of First Nations of Quebec-Labrador. "As far as we’re concerned, the whole criteria around social acceptability of major projects has become more and more important in terms of how we evaluate projects like Energy East and others."

Picard is a signatory to the Treaty Alliance Against Tar Sands Expansion, a coalition of 150 tribes in Canada and the United States fighting against any and all oilsands pipeline projects. While the coalition treated Thursday's news as a victory, Picard said there remains three more pipelines to defeat: Kinder Morgan's Trans Mountain expansion, TransCanada's Keystone XL pipeline, and Enbridge's Line 3 project.

"The fight goes on," he told National Observer. "We can’t certainly let our guard down at this point, because the search for new energies and fossil fuels will continue because the industry is there. We have to remain vigilant, look at what happens around us and react whenever called on."

Aurore Fauret, Tar Sands Campaign co-ordinator at 350.org said the decision is proof that climate action and pipelines don't mix, and that organized resistance can prevail.

"Justin Trudeau and (Natural Resources Minister) Jim Carr stood behind a climate review for Energy East, and that’s admirable, but it also makes me wonder why they don’t have the same concerns about Kinder Morgan, a pipeline they approved without considering the climate impact," read her emailed comments.

Montreal Mayor Denis Coderre said the TransCanada announcement was “a beautiful victory” against a “botched” pipeline project. Speaking to reporters Thursday morning in Montreal, he said the decision was also the result of leadership from his city and other municipalities who insisted on getting reforms to the National Energy Board to ensure a fair process.

“Again it shows how local governments can make a difference,” Coderre explained. “We accepted the reversal of Enbridge’s Line 9B (pipeline through Montreal), but we ensured there were measures in place to follow up and protect the community. But when you have something that represents 26 football fields and they want to open wetlands, and install pipelines everywhere — that’s unacceptable."

Of the cancellation, Green Party leader Elizabeth May added: “Today’s announcement from TransCanada to cancel plans for the Energy East pipeline will be celebrated by many Canadians – those who understand that transporting toxic diluted bitumen (dilbit) across pristine areas, and that exporting bitumen to offshore refineries, is a poor business model.

“This was an investor decision that resulted from the low global price of oil. Look at the number of transnational oil companies exiting the oil sands, selling their assets due to the high costs of extraction and production: StatOil, Conoco-Phillips, Royal Dutch Shell. Fossil fuel investment is becoming less viable while renewable energy investment increases exponentially. Governments need to step up with a plan to assist oil sands workers in transitioning into clean energy jobs.”

What goes around …
Instant Karma!
"We all shine on, like the moon and the stars and the sun."
John Lennon