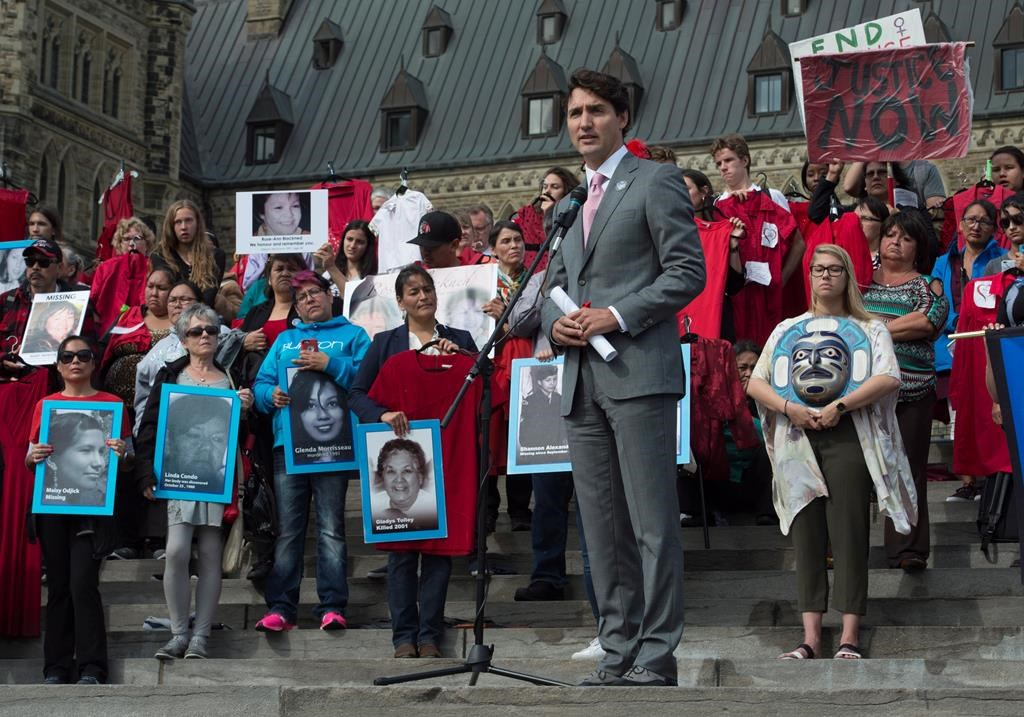 Prime Minister Justin Trudeau speaks at the Families of Sisters in Spirit Vigil in support of missing and murdered indigenous women on the steps of Parliament Hill in Ottawa, on Wednesday, October 4, 2017. Photo by The Canadian Press/Adrian Wyld
Previous story
Next story

Prime Minister Justin Trudeau stood quietly with his head down Wednesday as families expressed extreme anger toward him about the inquiry into missing and murdered Indigenous women and girls.

Trudeau must reset the inquiry led by four commissioners, Maggie Cywink from Whitefish River First Nation said in a speech to an annual gathering on Parliament Hill.

"If you want to be remembered as a prime minister who is healing ties with First Nations, then you must start with our women and families," said Cywink, whose sister, Sonya Cywink, was found slain near London, Ont. in 1994.

"Will you be seen as yet another politician, in the very long list of politicians, who simply peddled in the age-old craft of empty promises?

"How do you come out here and say that you support families?" she said.

"How dare you come out here and say these things?"

Before Trudeau began to address the audience, someone in the crowd urged that he "go home."

He went on to thank family members for sharing their frustration and for challenging him to do better.

"The missing and murdered Indigenous women and girls inquiry is something that I have long believed in, long supported," he said. "It was never going to be easy."

His wife, Sophie Gregoire Trudeau, told family members she can't imagine what it is like to lose a loved one for "senseless reasons."

"I stand here before you as a woman, as a mother, as a fellow Canadian, as a human being," she said. "We are suffering with you."

One of the inquiry's commissioners, Michele Audette, attended the Hill event.

Feds 'never did the work' to understand Indigenous concerns on pipeline: lawyer