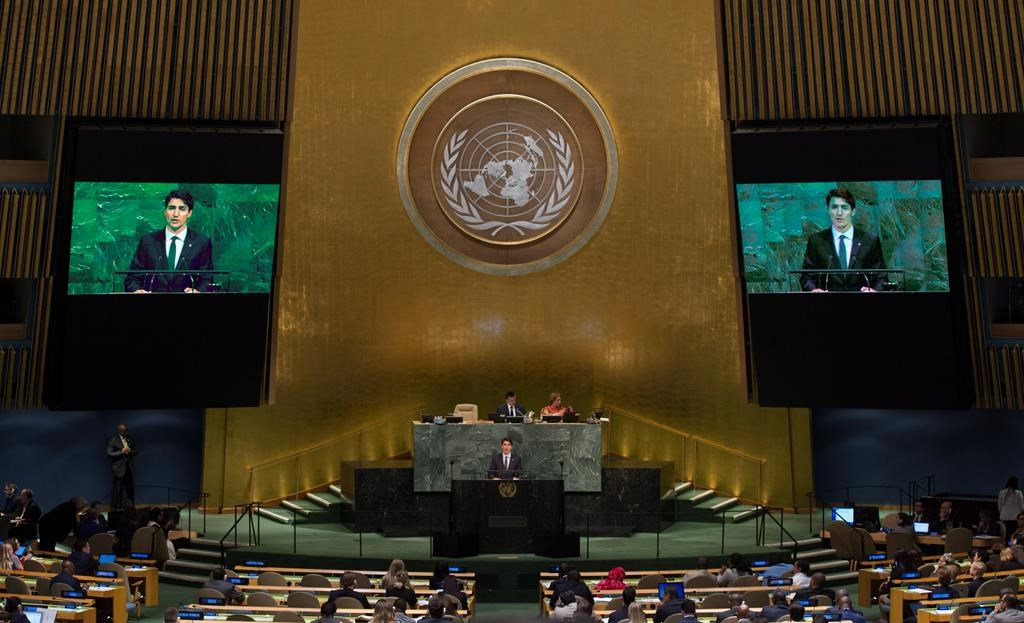 Prime Minister Justin Trudeau used the brightest stage in international politics to shine a light on the darkest corners of Canada's story on Thursday, devoting a speech at the United Nations General Assembly to the plight of Canada's Indigenous peoples.

He spoke of forced migration, broken treaty promises and family separations via residential schools. These left a devastating legacy on reserves to this day, in a country whose very existence, he said, came without the consent and participation of the Indigenous populations who lived there for millenniums.

"For Indigenous peoples in Canada, the experience was mostly one of humiliation, neglect and abuse," he said.

"There are, today, children living on reserve in Canada who cannot safely drink, or bathe in, or even play in the water that comes out of their taps. There are Indigenous parents who say goodnight to their children, and have to cross their fingers in the hopes that their kids won't run away, or take their own lives in the night. ...And for far too many Indigenous women, life in Canada includes threats of violence so frequent and severe that Amnesty International has called it 'a human rights crisis.'

"That is the legacy of colonialism in Canada."

It was the dominant theme of his address. He was asked later at a news conference why he dwelt so much on domestic issues and aired the country's dirty laundry on a stage designed for international crises such as North Korea, Syrian migration and atrocities against minorities in Myanmar.

Trudeau retorted that this is an international issue.

The UN has just adopted a set of development goals for 2030 and No. 6 is universal access to clean drinking water. In his speech, Trudeau pointed out that Canada, one of the world's wealthiest countries, has eliminated two dozen long-term drinking water advisories in Indigenous communities and is still working on others.

He also described another way this intersects with international affairs. When Canada tries to raise concerns about events elsewhere in the world, other countries quickly throw the aboriginal situation back. Other prime ministers have alluded to similar exchanges abroad.

But Trudeau's speech was also optimistic.

It looked ahead at a series of solutions: better infrastructure on reserves, better housing, signing of the UN Declaration on Indigenous Peoples and the dismantling of the old Indian Affairs department.

"Canada remains a work in progress," he said. "For all the mistakes we've made, we remain hopeful."

Trudeau used these examples to bolster his main point here at the UN this week: that Canada is ready to take on complex challenges, at home and abroad, and deserves a seat on the Security Council.

The rest of the speech focused on climate change, international trade rules aimed at helping workers and his controversial tax reform, which he cited as an example of his middle-class-friendly policies.

Trudeau drew applause when he promised to keep supporting the international climate-change treaty. But his opponents at home expressed incredulity at some of his topic choices.

One Conservative MP listed the things he didn't mention while talking about domestic issues: the plight of Myanmar's Rohingya, refugees, UN reform or North Korea. Another, Garnett Genuis, expressed outrage that he even raised the domestic dispute over his tax plans.

The NDP was also critical. In question period in Ottawa, NDP indigenous critic Romeo Saganash, a residential school survivor who worked for more than two decades on the UN Declaration on the Rights of Indigenous Peoples, referred to ongoing basic problems like water advisories: "How can the prime minister keep claiming to the world that this is the most important relationship when in reality, he is letting them down?"

But the speech drew praise from Indigenous leaders.

"I've worked on international issues on and off throughout my whole professional career and I've often been frustrated with the departure of the tone Canada takes internationally than it does domestically," Natan Obed, the president of Canada's national Inuit organization, Inuit Tapiriit Kanatami.

"Often Canada touts itself as being this wonderful country with no blemishes at all in the international realm. It is refreshing to see a prime minister be on ... such a large international stage and admit there are huge challenges for basic respect of rights of Indigenous peoples in Canada and also pledge to do something about it."

Perry Bellegarde, national chief of the Assembly of First Nations, said: "When I watched, and I listened, and I read his speech, I thought 'If you want to be a leader on the world stage, you have to be honest with yourself and tell a country's true and complete history.'

— With files from Kristy Kirkup in Ottawa