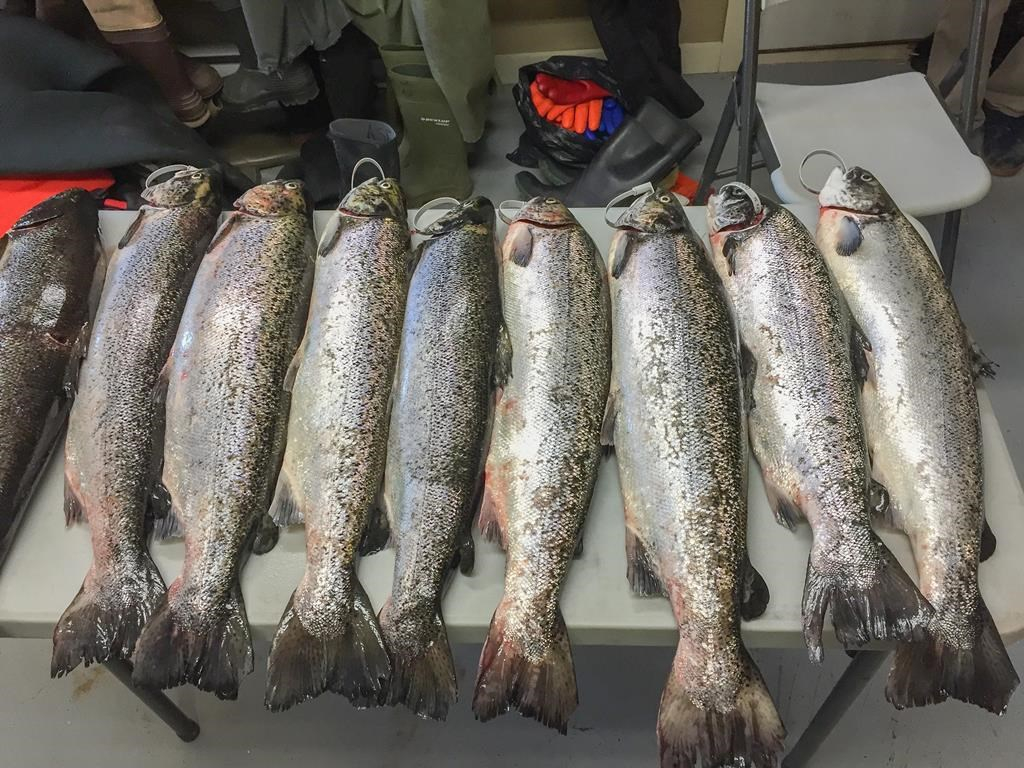 Wild salmon are shown in this undated handout image. Conservationists say not a single wild Atlantic salmon was detected in a New Brunswick river waterway, raising alarms over the fate of the troubled species. Photo from The Canadian Press
Previous story

Not a single wild Atlantic salmon was found in a New Brunswick river that was once home to a healthy population of the species, alarming conservationists who link their disappearance to the proliferation of aquaculture sites in the area.

The Atlantic Salmon Federation said in a new report released Thursday that for the first time since it began monitoring the Magaguadavic River fish ladder in 1992, no wild salmon had returned from the sea.

"Really this run is now extinct in this particular river," said Jonathan Carr, the group's executive director of research.

Despite a stocking program going back to 2002, the Fisheries Department says the population had been dropping steadily since estimating it at 900 wild salmon in 1983.

"We're fighting against a losing battle," Carr said from St. Andrews, N.B. "We have had a few fish return over the last few years, but we're just looking at handfuls and this is the first year where we haven't seen any wild fish return."

Carr said the wild salmon population in the southern New Brunswick river has been declining steadily since aquaculture companies started setting up open net salmon pens in the 1980s in the bay where the river empties. The federation now says the area has one of the highest concentrations of industrial salmon farms in the world, leading to concerns that farmed fish are escaping their pens and interbreeding with wild salmon.

In a statement Thursday, the Atlantic Canada Fish Farmers Association said the salmon federation is floating "hypothetical assumptions as science."

It said farming companies have found no containment breaches to explain the recent discovery of farmed fish, and says it has offered to perform genetic tests to pinpoint their source but the federation has not supplied samples.

It said about 5 million salmon swim in secured farms in southwest New Brunswick, and escapes are rare, mostly caused by extreme weather.

"The regulations that oversee salmon farming are rigorous. They are being followed," it said in the statement. "To point the finger at aquaculture based on hypothetical assumptions is ridiculous and ignores the cumulative effect and realities of warming oceans and river systems."

The Atlantic Salmon Federation said it found that in almost every year since 1994, more aquaculture escapees than wild fish were counted at the Magaguadavic fishway.

Carr says the danger for wild stock is that the farmed salmon pass on "less fit genes" to them, degrading their health and limiting their chances of survival. It's a phenomenon conservationists say has been seen at aquaculture sites in Maine, Norway and Scotland.

"There's a lot of interbreeding going on and they can really disrupt the gene pool and harm the overall fitness of wild salmon in these rivers," he said. "It only takes one or two aquaculture escapees entering these other rivers and that could really add another nail to the coffin of the wild salmon."

The federation said 15 farmed salmon that escaped were recently removed from the trap at the top of the Magaguadavic fishway.

Carr said there is also little monitoring of rivers like the Magaguadavic, suggesting the problem of interbreeding could be far more widespread than thought.

Carr's group has formed a multi-party committee aimed at coming up with best containment practices for the industry, increasing transparency and pushing to standardize rules around escape notifications.

"The Magaguadavic should be a cautionary tale," salmon federation president Bill Taylor said in a release. "Throughout North America no new open net-pen salmon aquaculture sites should be allowed in proximity to wild salmon rivers."

Salmon spawning usually takes place in late October, with the eggs hatching the following May or June. Juveniles stay in the river for several years, then go out to sea in spring before migrating to waters off Labrador or Greenland. They stay in ocean and then return to their river of origin.