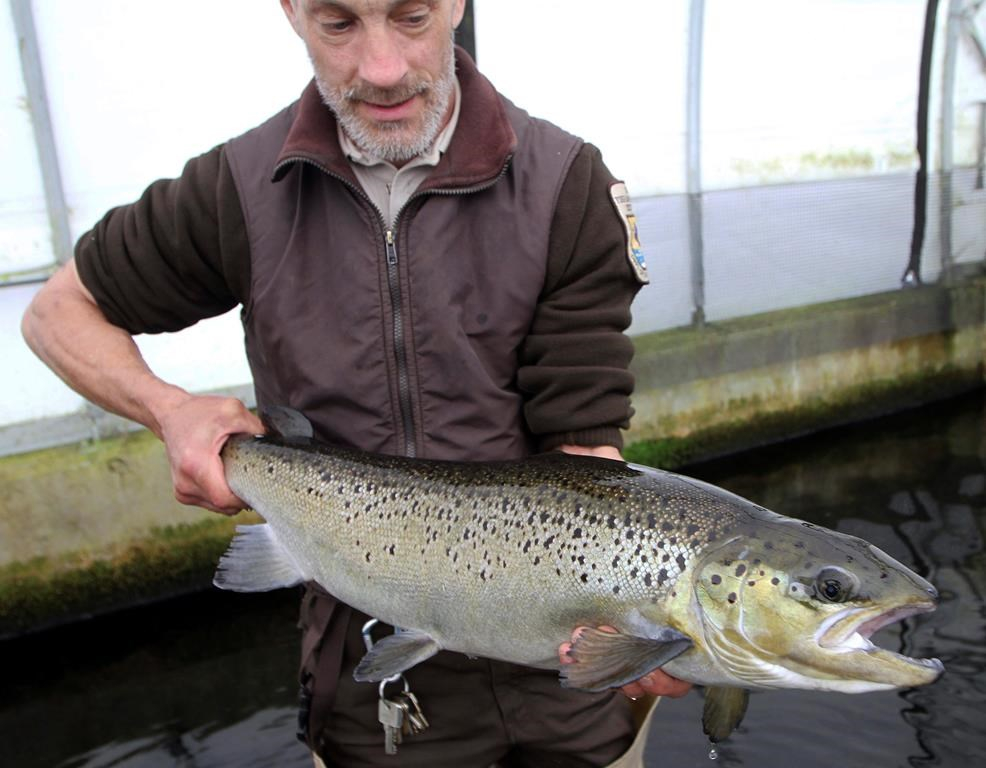 In this April 2, 2012 photo, Michael West holds on to a 4-year-old Atlantic Salmon at the National fish Hatchery in Nashua, N.H. File photo by The Associated Press/Jim Cole
Previous story

Fewer of North America's Atlantic salmon are making it back to rivers to spawn, which bodes poorly for the future of the imperiled fish, an international conservation group says.

Atlantic salmon were once abundant in the rivers of New England and Atlantic Canada, but they are now endangered or have disappeared in parts of both areas. The salmon are born in rivers, swim to the Atlantic and return to their natal river to spawn.

The New Brunswick, Canada-based Atlantic Salmon Federation released a report this month that says total estimated returns of the fish to North America in 2016 was a little more than a half million salmon. That is a 27 per cent decrease from the previous year.

The group says young salmon who spent only one winter at sea before returning to the river, called grilse, fared especially poorly last year. They returned at a rate nearly a third lower than 2015, the group said.

"What do we do? We've asked people to choose to kill fewer salmon," Crabbe said. "The long term solution is government to government agreements."

Atlantic salmon face a number of challenges in the wild, ranging from the presence of river dams to continued fishing pressure off of Canada and Greenland.

Crabbe said the changing environment of the North Atlantic has also impacted populations. Because of changes in availability of the fish they prey upon, the salmon have to exert the same amount of energy to eat the same amount of food, he said. That makes it more difficult for the fish to live long enough to make it back to rivers and spawn.

The U.S. Fish and Wildlife Service has released a recovery plan for Gulf of Maine salmon that calls for restored habitats, removal of dams and use of hatchery programs to try to rebuild the population. The Gulf of Maine's Atlantic salmon was listed an endangered in 2000 and has fallen sharply in population since the 19th century.

The National Oceanic and Atmospheric Administration's Northeast Fisheries Science Center includes an Atlantic Salmon Ecosystems Research Team that tracks and studies the population. Tim Sheehan, a research fishery biologist with the team, said it's important to keep an eye on long-term trends in salmon population and not put too much stock in one year.