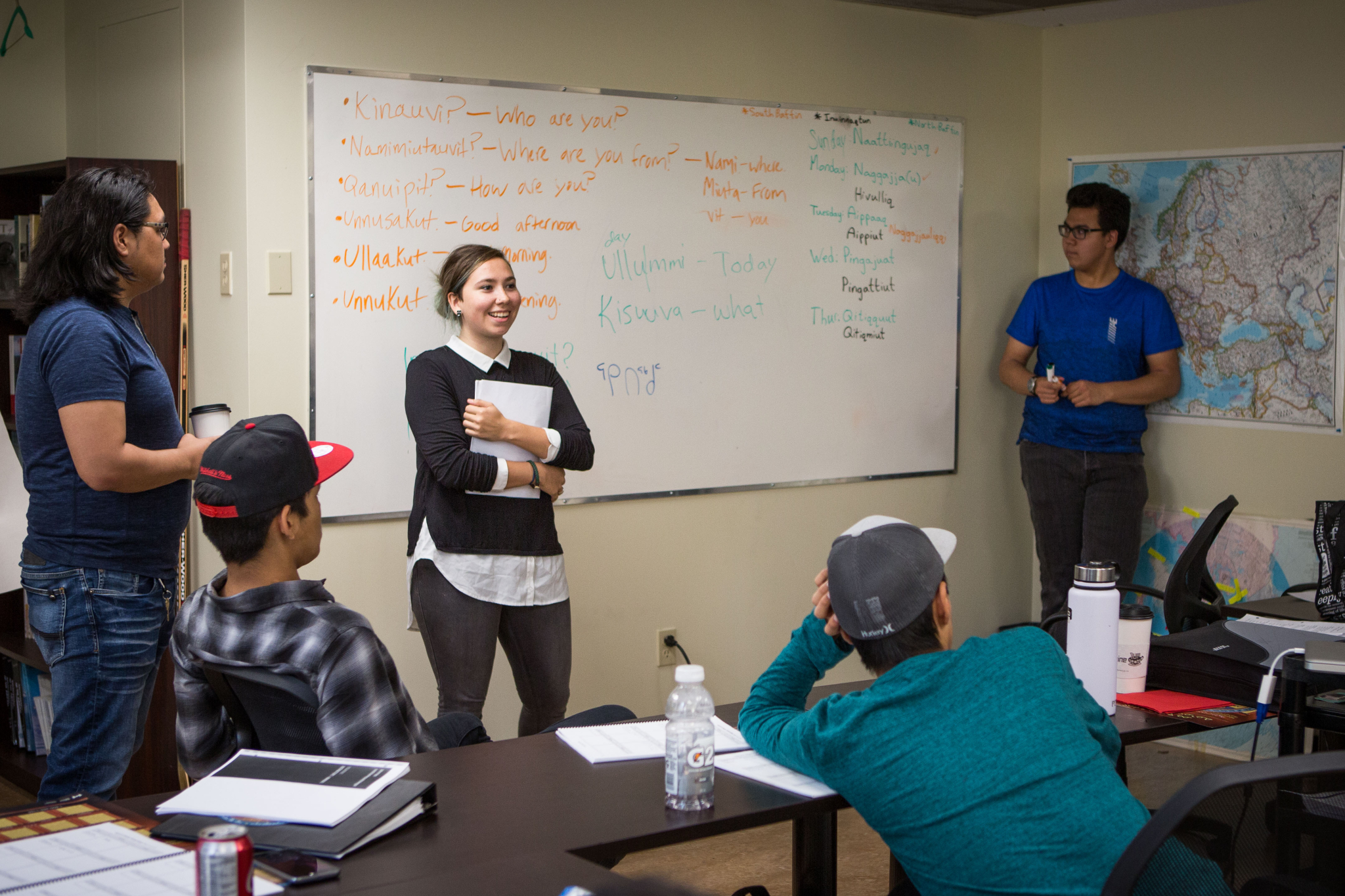 On an unseasonably scorching September day in Ottawa, it’s hard to imagine a place physically, culturally or emotionally farther away from Pond Inlet. At least, that’s how 18-year-old Lindsay Qanguq was feeling after flying roughly 2,000 kilometers south to attend Nunavut Sivuniksavut (NS), a post-secondary school for Inuit youth from Nunavut – Canada’s newest, largest and most northern territory.

The school shares a section of downtown Rideau Street with tattoo parlours, fast food restaurants, budget accommodation, drop-in centres and clinics. Homeless people chat with cops and traffic zooms by the front door of the school housed on two floors of a low-rise office building. There is glass, asphalt and concrete everywhere, all reflecting the glare of a relentless sun.

“It is so hot,” Qanguq gasps, knowing the temperatures back home have already dipped below zero. “And so different. Ottawa is huge and at first it was scary even to take the bus because it was my first time. And just hearing everyone talking and yelling, almost fighting. Hearing paramedics every night. That’s different.”

Pond Inlet is a predominately Inuit community on Baffin Island with a population just shy of 1,700, “and everyone knows everyone!” Qanguq says emphatically. In the first weeks of school she was still feeling culture shocked, homesick and lonely. It didn’t help that she turned 18 in Ottawa far from family and friends – even her NS roommate was away. But she remains determined to attend school in the south. This school.

“I want to be an Inuit politician,” she says, any dampness in her eyes quickly in check. It’s a dream nurtured since she was nine years old and drawing pictures of herself as a member of the territorial legislative assembly. “I will be the first female MLA from Pond Inlet. This is where it starts.”

“It’s a huge leap of faith to get on a plane – alone – there, and arrive here,” says NS program co-ordinator Morley Hanson. He’s been at NS for 29 years, almost from its inception in 1985. “A lot of the students have done school trips or family vacations to bigger cities in the south. But it’s still totally daunting.”

Guardians of implementing the treaty

NS is a silattuqsarvik, a college open to Inuit youth from Nunavut who are beneficiaries of Inuit land claims agreements. The school exists to teach them about the intricacies of those land claims, the political battles fought by parents and grandparents who slogged through decades of negotiations.

Chief among those settlements is the Nunavut Land Claims Agreement, signed May 25, 1993. The largest Aboriginal land claim settlement in Canadian history, it created a separate territory for Inuit in the central and eastern Northwest Territories and ensures Inuit are involved in decision making in the management of lands and resources; wildlife, harvesting, water and environmental management.

The agreement commits governments to work towards representative levels of employment in the public sector and a range of other rights and responsibilities covered in an historical 42-chapter document. “Even though the Nunavut negotiations are finished, we still emphasize treaty implementation,” Hanson says. “These students now have to be the guardians of implementing the treaty.”

They also come to NS to learn about Inuit skills, traditions and language, and colonialism dating back to first contact with the Qallunaat, the Inuit term for the white man. It’s unlikely any of these students haven't heard about tuberculosis, sanitoriums and residential schools, but they will learn how deeply those histories still reverberate.

“My grandfather was sick with tuberculosis and he was sent somewhere in the south,” Qanguq says. “He died there. I never met him.”

Important to learn about the past

Students discuss how Inuit were enticed off the land, out of their nomadic lifestyle and into settled communities, unknowingly giving up their land because they didn’t speak English.

“I hope something like that never happens again, but it could,” says 23-year-old Genova Angutimarik. “As Inuit youth, it’s very important that we learn about the past, what our people fought for, and understand and learn from them. If our people are not getting educated and we are just doing what others tell us to do, if we aren’t teaching our children our language or traditions, then we could lose our culture.”

Angutimarik travelled all the way from her home in Igloolik – closer to Greenland than Ottawa – in June so she could settle in with her five-year-old son before classes started. She’s getting used to the 20-minute bus ride morning and night to her son’s daycare, but she still finds Ottawa hot, noisy and crowded. She misses the sweeping expanse of land surrounding her community in the Foxe Basin.

“You can’t see anything here,” she says. “There’s always a tree or a building in the way. Being out on the land hunting, fishing or just having tea is such a stress reliever.” Her mother pushed her to go to NS, “so I could be a good role model for the younger ones and for my son. He’s going to see me going to school and learning about my history. I will be able to share that with him.”

Most grads return to Nunavut

For the first few years, NS “flew below the radar,” Hanson says. “That was a good thing. It allowed the founders to experiment and design the curriculum.” Then, he says, the funders of the school – federal and territorial governments, Inuit associations and Nunavut Tunngavik Inc. – as well as parents, teachers and employers started to see the positive impact NS was having when students returned to their communities.

And most NS grads do go home. Of approximately 500 graduates to date, an alumni survey shows more than 80 per cent return to live and work in Nunavut as filmmakers, journalists, teachers, and medical professionals. Some, such as David Joanasie, MLA for the Nunavut riding of South Baffin, become politicians.

Putting a school in Ottawa to teach Inuit youth about life in the north seems counterintuitive. Co-founder Murray Angus says if the purpose of the program is to learn about land claims, it had to be in Ottawa.

“This is where the negotiations were taking place throughout the 1980s until the Nunavut Land Claims Agreement was signed in 1993. We talk about land claims as if it was just that one time. But there is an ongoing need for negotiators. Absolute knowledge about the claims, the process, is critical. Otherwise the government might backtrack."

Invites to the Governor General’s residence

It is also handy to Parliament Hill and the Inuit Tapirit Kanatami, which represents 55,000 Inuit living in 53 communities across the Inuvialuit Settlement Region (in the Northwest Territories), Nunavut, Nunavik (in northern Quebec), and the Nunatsiavut (in northern Labrador) land claims regions. Other field trips include the Canadian Museum of History and – new this year – to a sister school in Montreal, Nunavik Sivunitsavut, offering a one-year program through John Abbott College.

The Ottawa NS offers two, one-year, post-secondary programs: Inuit Studies and Advanced Inuit Studies, accredited by Algonquin College in Ottawa. It also provides courses in political science and Nunavut administration accredited by Carleton University. Courses on The Circumpolar World and People and Cultures of the Circumpolar World are developed by the University of The Arctic and delivered by NS.

The school typically accepts about 60 students a year into a curriculum ranging from the complexities of the land claims that shape their lives as young Inuk, to living on their own in a large, urban centre. It’s debatable which is harder. “It is very challenging for them,” Angus says. “But it’s a remarkable thing to watch young people learn their own stories.”

Those stories are informed through courses such as Inuit-governmental relations, computer skills, essay writing, English and Inuktitut language lessons, and community development. Students can learn to drum dance, throat sing, or make their own Kamiiks (Inuit boots) and are frequently invited to schools, conferences, or the Governor General’s residence to demonstrate traditional songs, dances and Inuit sports.

'You can look forward in a good way'

In class, they will read the entire transcript of the first organized meeting held by Inuit in Coppermine – now Kugluktuk – in 1970 to discuss land claims. It's tedious stuff until students discover they are speaking the words of family, friends and community leaders from home. “They leave here knowing whose shoulders they’re standing on,” Angus says.

“I want to learn all the Inuit history,” says 18-year-old Parr Josephee. “Before school started, I didn’t know we were from Russia or Siberia. I came to this school to learn more about my culture, to read and spell in my language. I want to meet the future leaders of Nunavut.”

Josephee left his home in Cape Dorset on a high school exchange when he was in Grade 10 to escape bullying. “I was so stressed my hair started falling out,” he says. Now he’s keen to go back and share his experiences in the south with his family and his community.

“I don’t like to ask them questions about the residential schools because it takes them back there,” he says. “I’m hoping to learn about that here so I have a better idea of what they experienced. Then I want to show them you don’t need to drink or do drugs to forget this stuff. You can look forward in a good way and work hard to make your life better.”

The highlight of any school year is probably the year-end trip and NS is no exception. NS students do an annual cross-cultural trip to another country such as Hawaii, Australia, Norway, or Finland to connect with other Indigenous populations.

“We have gone into pretty remote places,” Angus says. “Northern Mongolia comes to mind and over the Andes into the headwaters of the Amazon. The trips started out as a reward for surviving the year but evolved into an opportunity to engage in cultural exchanges with Indigenous people in other parts of the world.”

While the students may not share a spoken language, they do share the common language of colonialism.

“There isn’t an Indigenous group in the world that can’t talk about the arrival of missionaries, government or industry,” he notes. “It helps students see how the Inuit struggle for control parallels struggles elsewhere in the world. It helps them appreciate what’s been accomplished in Nunavut.”

The kind of curriculum taught

The kind of curriculum taught here should be included in every school in Canada. How better to achieve reconciliation than to understand the pummeling colonial forces have done to our aboriginal peoples and to put ourselves in their shoes. This should also be a required part of all teacher training programs in Canada. I know I never got it many years ago and therefore was never able to relate to the aboriginal students in my classes like I wanted to. It's too late for me now, being 84, but it's overdue for my grandchildren and great grandchildren who go into teaching.