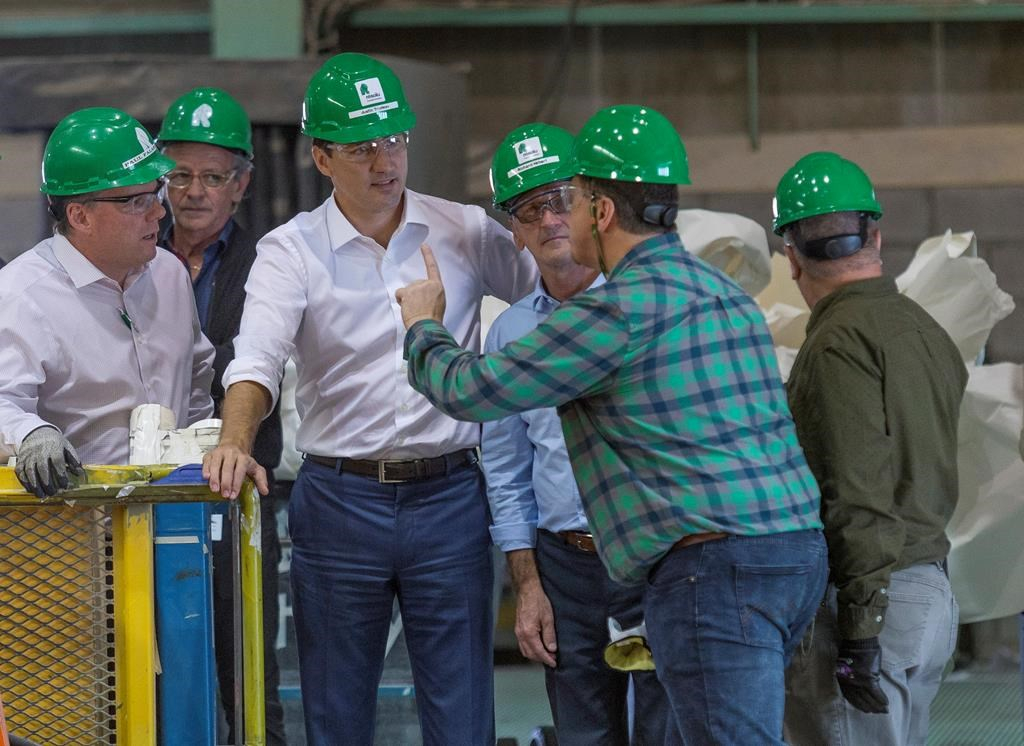 Prime Minister Justin Trudeau again waded into the debate on Quebec's Bill 62 on Friday, saying governments should not be telling women what to wear and what not to wear.

"As I've said a number of times as well, I don't think it should be the government's business to tell a woman what she should or shouldn't be wearing."

Bill 62, which was adopted in the Quebec legislature Wednesday, bans people from providing or receiving public services in the province with their faces covered and is widely seen as an attack on Muslim women.

It also prohibits people from taking public transit if their face is covered.

"We know there is going to be many weeks and many months of discussions on this, on what the implications are," Trudeau said as he campaigned ahead of a federal byelection Monday.

"And as a federal government, we are going to take our responsibilities seriously and look carefully at what the implications are."

Asked if that means challenging the law in court, Trudeau replied, "this means looking carefully at the implications of this law and how we continue to stand up for Canadians' rights."

A day earlier, Trudeau asserted it is not up to the federal government to challenge its constitutionality.

On Friday morning, a group Montrealers lined up by a downtown bus station wearing surgical masks, Halloween disguises and face-covering bandanas in a protest against the law.

Organizer Kathryn Jezer-Morton said the goal was to show solidarity with women who wouldn't be able to ride buses or use other services in light of the law.

"To not allow women who wear a niqab to access public services is so harmful, and a violation of their human rights," she told The Canadian Press in a phone interview.

"To think that you're doing them any kind of favour in the name of feminism, for one thing, is preposterous."

She added that most passersby supported the protesters, although others suggested the law could be good for women.

Quebec Premier Philippe Couillard has defended the law by saying it is necessary for reasons related to communication, identification and security.

On Friday, he reiterated his belief it will withstand any legal challenge.

"In society, people communicate with each other, identify themselves with their face uncovered," Couillard told reporters in Mirabel, Que., where he was meeting with Bombardier Inc. employees.

"What surprises me is that people seem surprised this is happening."

Couillard noted the Liberals under Jean Charest tabled a similar bill in 2009 but that it did not become law, and that he himself promised in the 2014 election campaign to bring in such legislation.

"We're doing exactly what we said we would do," he said.

On Friday, the Canadian Human Rights Commission said it was "concerned" by Bill 62.

"It is extremely worrisome to me that any government would use the law to target and marginalize a group rather than protect those who already suffer at the hands of discrimination," chief commissioner Marie-Claude Landry said in a statement.

"Laws should be adopted to end discrimination — not promote it."

Landry pointed out that, while Bill 62 applies to Quebec's public services, "city buses crossing provincial borders make this (the law) a federal matter."

On Thursday, the law was also unanimously condemned in the Ontario legislature, with Premier Kathleen Wynne calling religious freedom "part of our identity."

"Forcing people to show their faces when they ride the bus, banning women from wearing a niqab when they pick up a book from the library will only divide us," she said.

— With files from Morgan Lowrie in Montreal