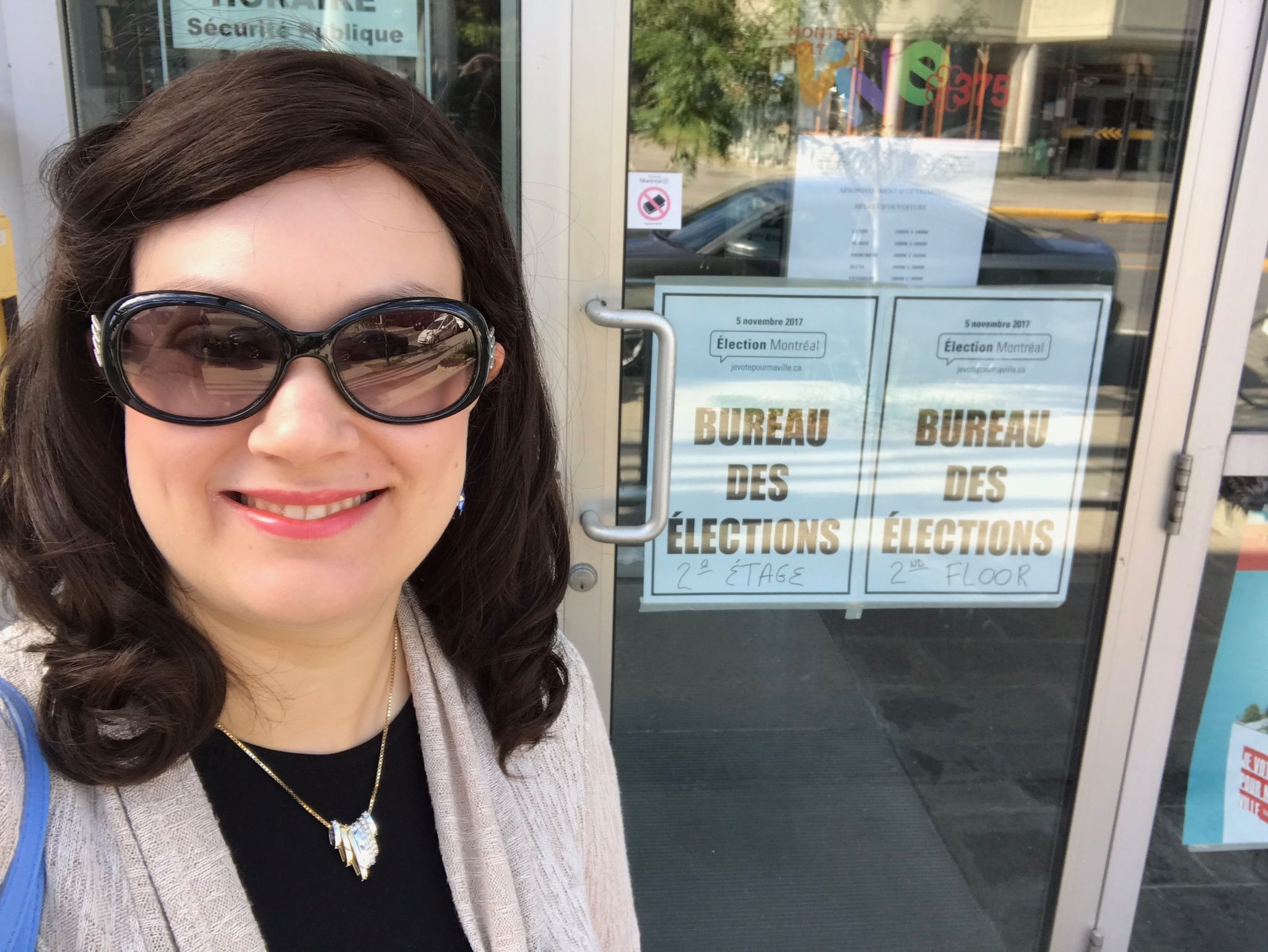 Outremont borough councillor Mindy Pollak poses for a selfie upon depositing her official declaration of candidacy for the 2017 Montreal elections. Photo provided by Mindy Pollak
Previous story
Next story

Despite growing up in the neighbourhood, and occasionally seeing a mysterious horse and buggy clatter down the street, Mindy Pollak was unaware of Outremont’s yearly family winter festival until she entered local politics in the Montreal borough.

Like a quarter of Outremont’s residents, Pollak is Hasidic. In her first year as borough councillor, she placed an ad in a local Jewish publication inviting readers to attend the free festival, which featured face-painting, ice-skating, buggy rides and a bouncy castle.

For the first time she could remember, Hasidic families mixed with the borough’s otherwise largely French-speaking residents at the festival. “It was revolutionary! Yet it was such a simple gesture,” Pollak said. “The following year, I had kosher marshmallows to roast.”

Fostering inter-cultural dialogue and remedying a disconnect between Outremont’s Hasidic and non-Hasidic populations is what propelled Pollak into politics. In 2013, aged just 24, she earned accolades as the first Hasidic woman ever elected to political office in Montreal. She is defending her seat in the Montreal municipal elections on Nov. 5.

Montreal’s Hasidic population is the largest in North America outside of New York. Divided into five different sects, members are easily identified by their clothes; men don austere black suits and furry hats, and women wear long skirts, long sleeves and cover their hair with either a wig or a scarf.

Pollak never thought she would be a politician.

“When [municipal party] Projet Montréal asked me if I would run, I laughed because it wasn’t something I’d ever considered,” she said. “But at the end of the day, I decided if I have a chance to make a difference and change things, how can I not take that?”

The party encouraged Pollak to join them after noticing the work she was doing in a community initiative and Facebook group called Friends of Hutchinson Street. The group invited local Hasidics and non-Hasidics to public meetings, mediated neighbourly disputes, and illuminated Jewish holidays and customs for secular residents.

The group’s efforts are a much-needed salve for a fractured community. One local resident has a blog that relentlessly calls out the Hasidic communities on issues ranging from double-parking to synagogues flaunting zoning laws. Street signs get vandalized to mock Hasidic men’s payot, or curly side-locks. Secular residents complain about the Hasidic population’s insularity — Hasidic kids go to private Jewish schools, and adults avoid secular law courts as much as they can.

Community tensions are exacerbated by local politics and the implementation of by-laws that many deem purposefully discriminatory towards the Hasidic communities. A referendum last year upheld a ban on the opening of new places of worship on a major commercial street in the area — a move that only impacted the growing Jewish community. And while playing music while parading a new Torah through the streets is permitted in the neighbouring Plateau borough, it is not in Outremont.

Leila Marshy, Pollak’s Palestinian friend, neighbour, and Friends of Hutchinson Street collaborator, said that many of the main criticisms leveled at Hasidic communities in Montreal are unfair and hypocritical. “(Quebecers) criticize them for going to their own schools, keeping to themselves, protecting their language, building their own institutions. (But) Quebecers have spent the last 300 years doing that in Canada! You’d think they’d have some kind of understanding of a community trying to protect itself.”

On the campaign trail

Pollak said that door-to-door campaign visits over the last few weeks have revealed that many Hasidic and non-Hasidic residents are “fed up” with conflict. “They are ready to move on, for something more positive,” she said.

While canvassing one night before the election, Pollak flicked between English, French and Yiddish, and dedicated as much time to chatting with children and those unable to vote as she did to potential voters who shared qualms and concerns. People warm immediately to her friendly and direct approach.

Pollak said her religion does not interfere with her politics. “I don't think you can assume that a white middle-aged male is less biased towards anything or has less preconceived notions about a certain issue than somebody who is visibly religious in some way.”

While Judaism is part of her daily life, it’s not something she “needs to forcibly separate.” Plus, the flexible nature of her job means that she can easily balance religious and family commitments. Not married herself, she said being an aunt is her “favourite role.”

As a Hasidic woman, Pollak will not shake hands with any men outside her family, something she said “doesn’t prevent or change anything.”

As one of the only Hasidic individuals in the public eye in Montreal, Pollak considers herself something of a myth-buster for the oft-maligned Hasidic communities. She thinks her biggest accomplishments to date are “the conversations where I’ve got people to realize that we are all just human, and we can all have a conversation.”

A key myth Pollak wants to dispel is that Hasidic women are oppressed, citing her political career as case in point. “There are strong female roles in the Bible and Jewish history,” she explained, adding that contrary to secular opinion, Hasidic women often have jobs outside of the home. “We aren’t all in the kitchen. Women are secretaries, teachers…There’s a female doctor, there’s accountants, there’s comedians.”

She added that it is inevitable that a Hasidic woman, not a man, would represent the Hasidic population in Quebec, given that most adult men do not speak French, having moved as adults to Montreal from New York, Europe or Israel to marry their wives.

To each person whose door she knocked on Tuesday night, Pollak impressed the importance of not just voting her in, but voting for a Projet Montréal borough mayor. “I was alone for four years [at the borough council] and it was incredibly difficult to get anything done,” she explained. “It was constant conflict.”

Indeed, Outremont council meetings were so acrimonious that they became a laughing-stock for the broader Montreal community when satirical Radio-Canada television series Infoman made them the focus of ten episodes, gleefully documenting the in-fighting between the five female councillors.

Host Jean-René Dufort joked that the departure of the outgoing mayor Marie Cinq-Mars marked an end of an era; “I’m sad to lose the best show in town,” he told National Observer.

Amid the hostilities, Dufort said that Pollak stood out from her peers. “She had more decorum than the rest. She seemed the most calm and mature.”

Projet Montréal’s mayoral candidate for Outremont, Philipe Tomlinson, described his colleague as a “flagbearer for openness, for dialogue, and for everybody getting to know each other.”

Editor's note: This story was updated at 12:35 p.m. EST on Friday, Nov. 3 to include an additional photo credit and correct a spelling error.