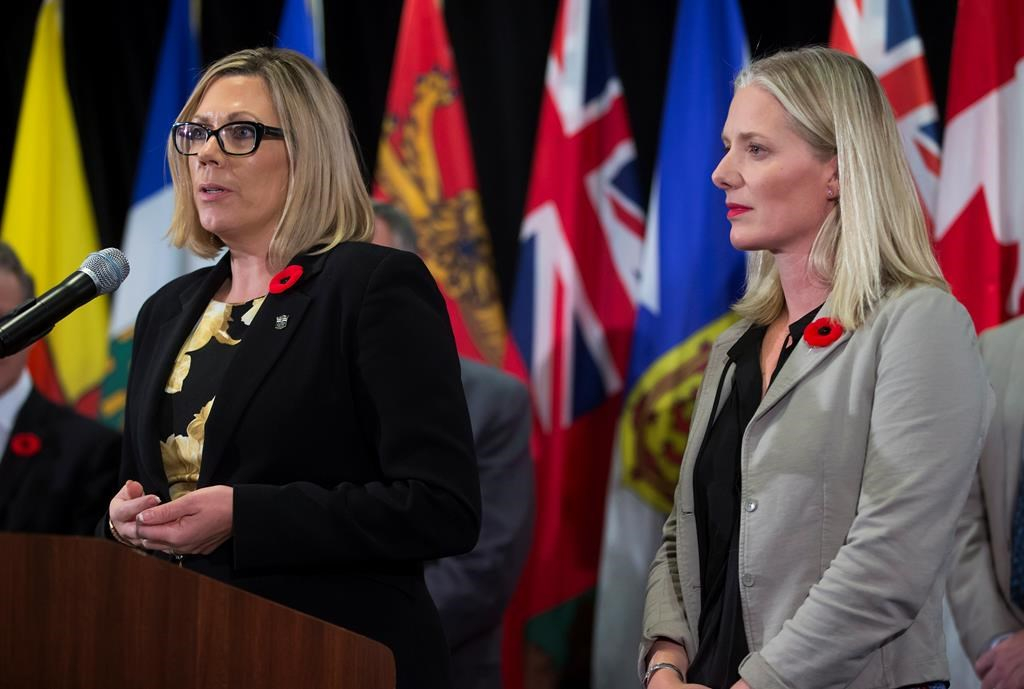 Rochelle Squires responds to a question as Catherine McKenna listens during a news conference after a Canadian Council of Ministers of the Environment meeting in Vancouver on Nov. 3, 2017. Photo by The Canadian Press/Darryl Dyck
Previous story
Next story

Manitoba's sustainable development minister says a federal threat to impose a higher carbon tax on the province is misguided and reveals a breakdown of co-operative federalism.

Rochelle Squires said her government is standing firm on its promise to bring in a carbon tax of $25 a tonne next year and to keep it at that rate, citing other climate measures her province has brought in.

Ottawa has demanded provinces implement either a cap-and-trade system or a tax that would start at $10 a tonne in 2018 and ramp up to $50 a tonne by 2022.

McKenna, speaking to reporters after a meeting of provincial, territorial and federal environment ministers in Vancouver, said her government will review the provinces' prices annually to make sure they're consistent with the national standard.

If not, the federal government would implement a "backstop" to bring the price up to the federal rate, she said.

"We certainly hope that all provinces step up, but if not, then we do have our plan that we would have to take action on," she said.

"We've been clear all along that carbon pricing is one aspect of our very comprehensive, made-in-Manitoba climate and green plan," she said in an interview.

"What we're seeing is an erosion of co-operative federalism. We started off with an agreed-upon goal of reducing our carbon footprint to this backstop."

Asked whether Manitoba was willing to go to court over the issue, Squires said the province did not want to spend money, taxpayer resources or time on the dispute.

"All Canadians are expecting us to get the job done on climate. We want to get to work. We don't want to have this lingering situation with Ottawa," she said.

She said Manitoba has been a climate leader, pointing to its development of hydroelectricity, and that the province's plan would reduce emissions more than the federal government's "backstop."

Most provinces have already agreed to follow Ottawa's proposal. Saskatchewan is the only one threatening not to impose a carbon tax at all.

British Columbia introduced a carbon tax in 2008 and increased it annually until 2012, when it reached $30 a tonne. The minority NDP government has said it will increase the tax by $5 a year until it reaches $50 in 2021, a year before Ottawa's deadline.

After their meeting the ministers released a new report, in the form of a publicly accessible website, which shows that Canada has made significant reductions in air pollutants, including smog and acid rain.

The report says improved air quality was estimated by Health Canada to have prevented 4,100 deaths, 2,200 hospital visits and 770,000 asthma events in 2011, the most recent data provided.

They also announced new air quality standards for nitrogen dioxide, which would reduce emissions that are linked to health effects such as decreased lung function, respiratory health problems and environmental impacts.