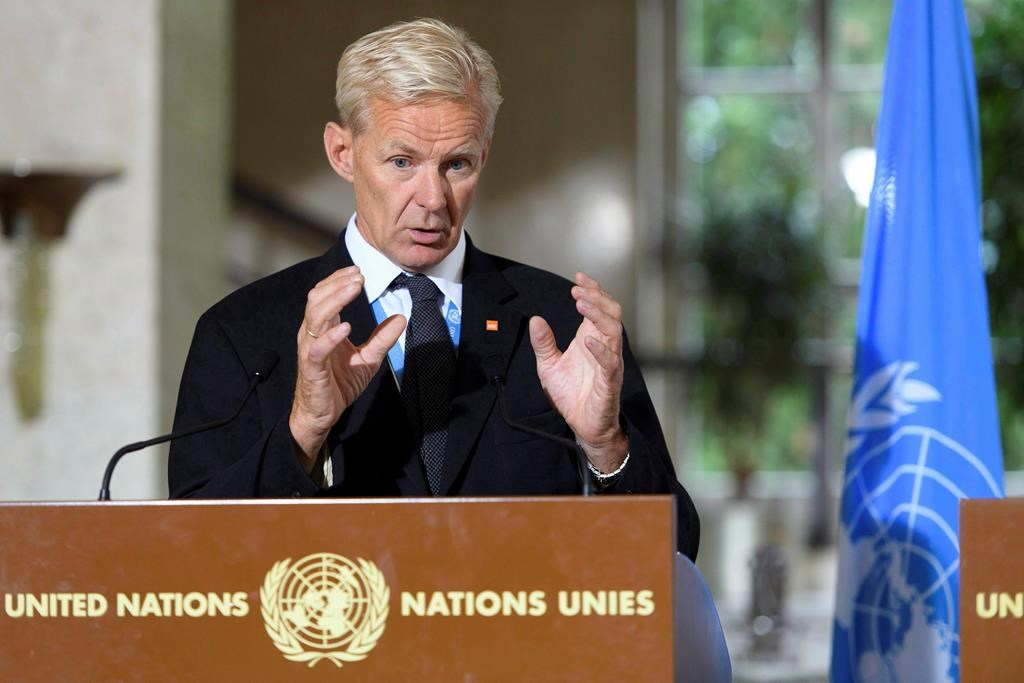 Jan Egeland, Special Advisor to the UN Special Envoy for Syria, speaks about the International Syria Support Group's Humanitarian Access Task Force at the European headquarters of the UN in Geneva, on Aug. 24, 2017. File photo by the Associated Press
Previous story
Next story

Jan Egeland, who was UN undersecretary general for humanitarian affairs and emergency relief at the height of some of the world's most recent crises, said he applauds Rae's appointment.

But he said Rae should expand the scope of his diplomacy beyond Bangladesh, which has absorbed the hundreds of thousands of fleeing Rohingya Muslims, and Myanmar, whose military leaders are being blamed for what has been branded as ethnic cleansing.

"My humble advice to the Canadian envoy is to get countries like China, India, Japan, Singapore to put pressure on the military and security services in Myanmar," Egeland said in an interview.

"It's not like they don't travel, that they do not have bank accounts abroad. They are reliant on the rest of the world."

Egeland held key posts at the UN during the Darfur crisis, the enslavement child of soldiers in South Sudan and Uganda and Israel's war on Hezbollah in Lebanon in 2006. He also helped organize the peace process between Israel and the Palestinian Liberation Organization that led to the 1992 Oslo Accord and a ceasefire agreement that ended Guatemala's civil war in 1996.

Though he is now head of the Norwegian Refugee Council, which has tried to provide aid to the Rohingya in Myanmar's now-scorched Rakhine state, Egeland said humanitarian assistance will not be enough to end the suffering of one of the world's most vulnerable populations.

"Special envoys are indisputably important to get attention, get initiatives, get energy into international diplomacy, which is often the only the way. The way out of a humanitarian crisis is not first and foremost with humanitarian aid," said Egeland.

On Friday, Rae began a two-day tour of Cox's Bazar, Bangladesh, where 600,000 fleeing Rohingya Muslims from neighbouring Myanmar have sought refuge since a crackdown by that country's security forces in late August.

The former interim Liberal leader is to meet Myanmar government officials from ministries such as border affairs and health.

The official said Friday that Rae will brief Prime Minister Justin Trudeau on his first round of meetings in Bangladesh and Myanmar at next week's Asia Pacific Economic Co-operation leaders' summit in Vietnam.

No meeting with Myanmar leader Aung San Suu Kyi is planned, but officials say that Rae is not ruling out a meeting with the honorary Canadian citizen and Nobel laureate who has faced widespread international criticism for not speaking out against the violence against her country's Muslim minority.

After giving Trudeau a face-to-face update, Rae will also use the 21-member APEC bloc to meet other regional players to push for a co-ordinated solution to the crisis that has so far forced 900,000 Rohingya into exile in Bangladesh.

Rae will not accompany Trudeau to the Association of Southeast Asia Nations summit in the Philippines afterwards, a 10-country regional club that includes Myanmar, the official said.

Egeland urged Canada to use the ASEAN summit discuss solutions to the crisis.

"Those ASEAN actors and powers have great influence and need to be told in no mistaken terms that they need to help solve this," he said.

Canada is interested in talking to Asian countries about the crisis, which is why Rae is spending time at APEC and met the foreign minister of Indonesia on his way to Bangladesh earlier this week, officials said.