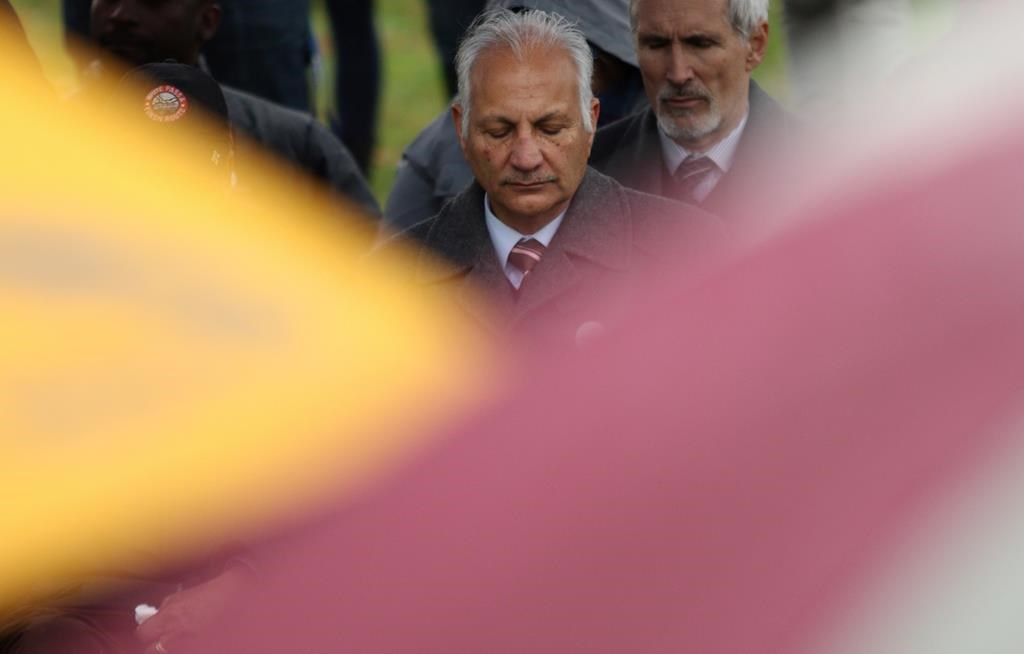 Manjit Virk, father of Reena Virk, takes comfort as supporters speak at a memorial marking 20 years since the swarming and bullying death of 14-year-old Reena Virk at the Craigflower Schoolhouse in Victoria, on Nov. 14, 2017. Photo by The Canadian Press
Previous story
Next story

Reena Virk struggled to understand why people considered her different and a target for school bullies, her father said Tuesday at a memorial to mark the 20th anniversary of the Victoria teenager's death.

Standing just steps away from the beach where his daughter was murdered in November 1997, Manjit Virk said Reena was a naive, 14-year-old girl trying to find herself in a hard world and ended up the victim of a "horrible act."

About 200 people gathered outside a historic schoolhouse along the Gorge Waterway to mark the sombre anniversary during a pounding rainstorm. The site overlooked the beach near where Virk was killed and is not far from the Craigflower Bridge where the teen was lured and beaten by a group of girls.

"When she went to school, she had a hard time," said Manjit Virk. "She was very puzzled. Why would people pick on her?"

He said as parents, he and his wife, Suman, were worried about their daughter's struggles to find acceptance among her peers. Virk said his daughter was trusting, and their attempts to warn her about possible troubles ahead did not sink in to a teenager seeking her independence.

"We always told her, 'Reena, this is a part of life. Some people have different values. They will mistreat you, but you always make sure you be kind with them. You don't retaliate. You don't fight back. Talk to your teachers. Talk to us.' "

Virk's death made international headlines after it was reported she was the victim of a swarming attack by a group of girls who invited her to meet under the bridge to hang out. The attack started when one of the girls extinguished a lit cigarette on her forehead and ended with her death in shallow water near the bridge.

Six girls were convicted of assault causing bodily harm and sentenced to up to one year in custody.

Warren Glowatski and Kelly Ellard were convicted of second-degree murder after they followed the limping girl away from the fight and drowned her in the Gorge.

"Little did she know this world is not a very safe place for her," said Manjit Virk.

Glowatski was 16 at the time of Virk's death and has been released on parole, while Ellard, who was 15, remains in prison.

"Anybody who lives in Victoria will tell you they can't drive over this bridge or walk over it and not think about Reena Virk," B.C. Education Minister Rob Fleming said after the event.

Fleming paid tribute to the Virk family, who turned their grief into a public campaign against bullying.

He said in the two decades since the girl's death, school's have launched numerous successful anti-bullying and inclusion programs, but it's difficult to forget the price paid by Reena Virk.

"It's a day to celebrate tolerance and diversity and to rededicate ourselves in Reena's memory to make sure no child is bullied in the way that she was," said Fleming, who called her death a national tragedy.

Following the memorial, Manjit Virk said he found the experience "therapeutic." He said Reena is never far from his family's thoughts.

He said the anti-bullying campaigns in schools and across society in general are comforting in that they seek to make the world a better place.

But Virk said he still has moments of darkness.