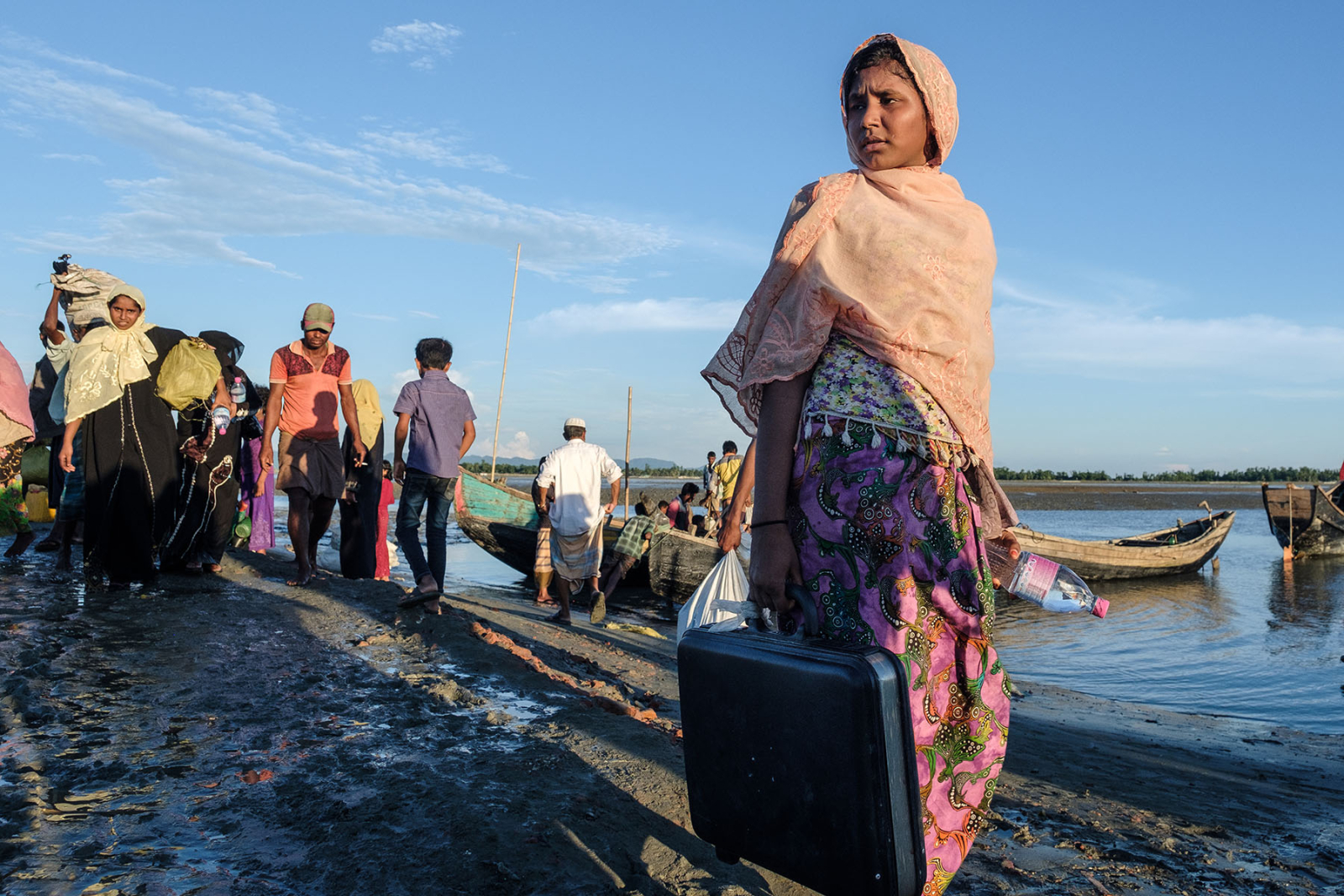 A slender girl with a solemn demeanour, Tahera was only nine when a trafficker came to her parents in the Rohingya refugee camps in Cox’s Bazar in southern Bangladesh. The trafficker promised her parents a lot of money if Tahera could work as a domestic worker for a Bangladesh family. Her parents fled to these camps with 200,000 other Rohingyas running from violent ethnic tensions eight years ago.

More than half a million new refugees escaped the violence in Myanmar over the last few months, in what experts call 'textbook ethnic cleansing.' Rohingyas say they had to run after Myanmar soldiers and local mobs attacked, raped and killed Rohingya civilians and burned down their villages. And it’s not the first time Rohingyas have crossed over escaping violence. Over the past several decades, Rohingya have fled to Bangladesh from Myanmar. Human Rights Watch reports that the Rohingya, a Muslim minority of 1.2 million in Myanmar, are vulnerable to systemic human rights violations as they are viewed as illegal migrants in Myanmar and are not granted citizenship or given access to education and healthcare.

As a country policy, Rohingya refugees like Tahera and her parents are not legally allowed to work while living in Bangladesh camps. But her parents were desperate for cash and Tahera was forced to work as a cleaner in a home and look after children younger than her. In exchange for Tahera’s work, her parents received 500 Takas (CAD $7.60) a month. She was beaten each time she made a mistake.

One day, a baby fell off the bed during her watch. She said her employer beat her head repeatedly in retaliation. “I couldn’t stand it, so I wanted to call my parents and inform them about what I was facing. But the employer didn’t give me a phone to call my parents. All I could do was cry,” said Tahera, now 11. Finally, one day, she was able to call her parents and told them about the abuse. Tahera was lucky. Her mother took swift action and brought money to her employer and begged for her release. She still lives in the Kutupalong Camp with her family.

Tahera is one of hundreds of Rohingya refugee children who have been trafficked into bonded labour like domestic work in Bangladesh. According to UNICEF, “Other dangers lurk in the disorderly setting of the camps, including traffickers and others looking to exploit and abuse the young and vulnerable.” For these refugees in Cox’s Bazar, being unable to legally work to support themselves puts them at greater risk of being trafficked or kidnapped into slave labour as food rations are not sufficient. Parents are sometimes forced to sell their children into bonded labour for sheer survival.

That’s what happened to Kulsuma, now 12. She was sent to Chittagong, a nearby city, to work as a domestic helper in two houses. She was forced to work for two years to help pay for her older sister’s wedding. Every month, her father received a payment of $3000 Taka (CAD $45). She received nothing but physical blows for her work. “My employers liked to beat me. I couldn’t stand it anymore. One day, my employer tried to stab me with a knife, but I ran outside and there were many people around and she couldn’t do so.” Kulsuma eventually ran away for good. Today, she lives with her parents in a refugee camp in Shamlapur.

Long lines of Rohingya men, women and children waiting for their daily food rations snake along the streets every day in the new make-shift refugee camps in Bangladesh. The Bangladesh military is administering the aid to bring order to the chaos. International aid agencies say the need for aid and trauma care is overwhelming. UNICEF is calling for US$76.1 in donations to help the emergency refugee crisis; only seven percent has been funded so far.

At least 60 per cent of those who recently escaped to southern Bangladesh are children, according to UNICEF. Around 720,000 Rohingya children live in the temporary homes including the recent arrivals intermingling with those who were living in the camps for several years.

According to observers, there are many children doing hard labor work such as carrying construction materials at the camp. Sometimes they are left to fend for themselves because their mothers have gone away begging for money and food for several days at a time. The kids also sell vegetables, firewood, and food. Most of their employers are opportunistic Bangladeshis who live near the camp and see an opportunity to profit from these refugees.

Mariam’s childhood was stolen when she was abducted and sold into slavery at five years old. She says she was taken by a trafficker while her mother was sick in the hospital in the camp about a decade ago. Mariam was forced to clean, cook and wash clothes for her employer. She worked there for five years and says she did not get paid. “Every time I asked the employer about my salary, the employer always got mad and beat me,” she remembers. Mariam changed jobs, but her new employer also cheated her of her salary. She worked for another six months and eventually escaped. The trafficker’s daughter offered to take her to work at another home in Rangpur, but Mariam refused. They fought, and Mariam remembers screaming: “You’re kidnapping me! I want to go back to my mother!” They dropped her off in Chittagong and her mother Aisyah, 35, eventually found her there serendipitously.

When Aisyah discovered her daughter Mariam was missing, she reported it immediately to the police. She searched for her child every day for years. She decided to try begging to continue the search in the nearby city of Chittagong. After one year of begging in people’s front doors, she found her daughter. It was a miracle, she said. “She told me everything that happened to her and her first employer didn’t pay her salary. The second employer also the same,” she said. Aisyah now lives in Leda camp with her daughter. “I am happy now,” she said.

The Rohinghya male refugees, meanwhile, have become vulnerable to exploitation as slave labourers or indentured servants. Anwar Islam, 28, came from Thomboru, Mongdu in Rakhine State in Myanmar eight years ago.

He was living in the camps and did not have enough food to eat despite the food aid, so looked for steady work. Several years ago, he went looking for odd jobs in a nearby village with six other Rohingya men from the same camp. One landowner saw them and offered work on his land immediately for 400 Taka (CAD $6) a day. They worked there for around eight days. They asked for their salary, but he said the landowner refused to pay. The floodwaters were rising and Anwar knew he wouldn’t be able to work further. The landowner only gave Anwar and his friends 300 Taka (CAD $4.50) for all of their combined labour and asked them to come back for the rest of the salary in three days. They returned and were beaten viciously. Anwar had to be treated in the hospital.

Oli Ahmed, 65, was also from Rakhine State and escaped 8 years before from Myanmar. He said he was cheated of his salary by the Myanmar government for his labour on infrastructure projects. “I was treated like a slave,” he said.

When he fled to Bangladesh, he entered an agreement of bonded slave labour with a landowner. In exchange for leading a team of fishermen, he was paid 2500 Taka (CAD $38) a month. However, he was also forced to pay half of the fishing operation costs including gas for the boat. The landowner also deceived him into believing he would receive half of the fish that was caught. In reality, he said, “I live in debt. The fishing equipment became my burden.” If he argues for more pay, the landowner responds by saying he could leave anytime. Ahmed says he has no other choice and refuses to return to the squalor of the refugee camps to depend on aid. Now retired, his two sons have taken over the same indentured slavery agreement with his boss. Ahmed longs to return to Myanmar to live independently.

Recently, the two countries have agreed to cooperate over the repatriation of Rohingya refugees and to step up border security. But the details have not been confirmed.

The article should say 76.1