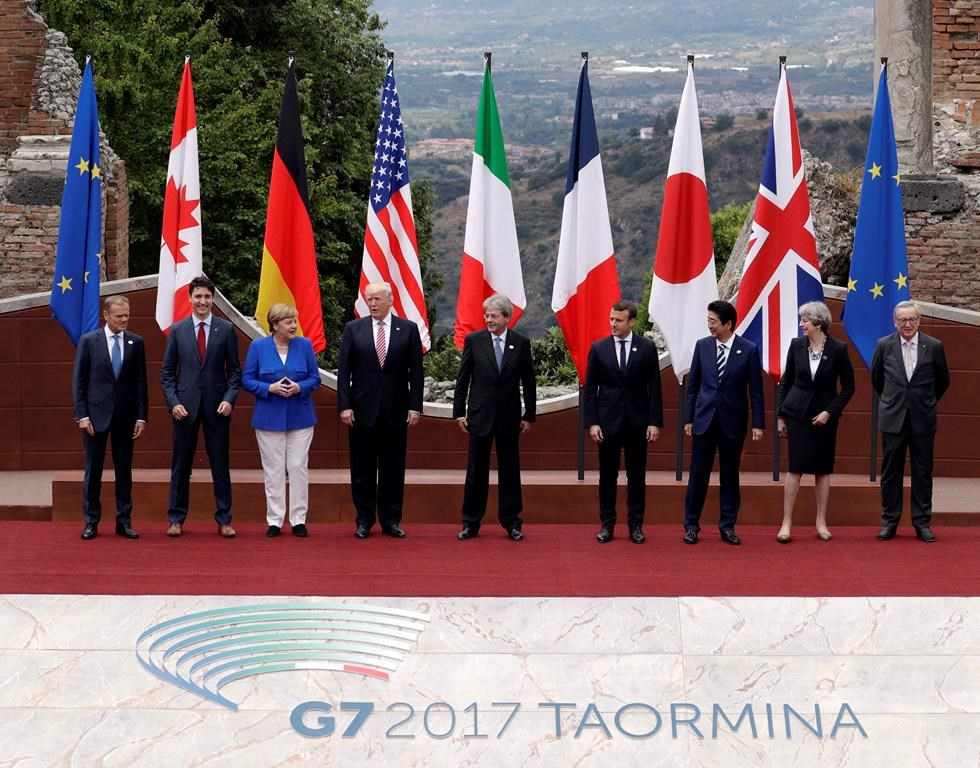 Leaders of the G7 pose during the G7 summit in the Ancient Theatre of Taormina (3rd century BC) in the Sicilian citadel of Taormina, Italy on May 26, 2017. File photo by The Associated Press/Andrew Medichini
Previous story
Next story

The Liberal government wants to lift the mystery surrounding the G7 summit as it prepares to host the gathering next year, in hopes that Canadians will feel more included and, perhaps, less inclined to protest on the periphery.

"The idea is to get input from Canadians," Peter Boehm, the Canadian G7 summit sherpa, said in an interview with The Canadian Press.

"What are they thinking about some of the big themes in the world, whether it's economic inclusion, what the jobs of the future might look like, climate change, energy and, indeed, some of the big foreign policy and security questions that might be out there?" said Boehm.

The efforts to open the process up to Canadians includes Boehm speaking at a public event Thursday night, organized by the Toronto branch of the Canadian International Council and the G7 Research Group at the Munk School of Global Affairs at the University of Toronto.

"A lot of this is listening and then feeding it through, but also a chance for us to demystify what the G7 is," said Boehm, who is preparing for Canada to assume the G7 presidency in January, six months before it hosts the summit at a resort in La Malbaie, Que.

"It's not just a big gathering where you see a lot of people and even more security."

Heavy — and armed — security presence is a common sight on the edges of G7 summits, where the need to protect the leaders of powerful countries takes on added urgency due to crowds gathered for demonstrations, which have sometimes turned into violent clashes with police.

The turbulent Toronto G20 summit in 2010, which included mass arrests and cases of police misconduct, reverberated for years.

Boehm suggested involving Canadians along the road to the G7 summit is one way to get ahead of the issue.

"We all have the right to express our views and we fully expect that there will be people who will be expressing their views," said Boehm. "My own view is that it is best to do that from an informed perspective, so that's part of the reason for the outreach."

Still, Boehm said the summit organizers will nonetheless be prepared for protests.

"In the past at large gatherings there has also been infiltration by less desirable elements who do not want to express views nor hear views, but they want to create mayhem," he said. "So, on the security side, we will certainly be ready for that."

What is most distressing is,

What is most distressing is, and yes, I do reference from experience, ‘why?’
And suddenly now?
Canada shares that particular malfeasance with other ‘democratic’ nations.
Of not answering that essential pillar of a democracy.
The answer to the question, will most possibly become, yet another holding back of truth.
No transparent answer to the essential question of ‘why?’.
Seems democracy has had a built in failsafe of of never telling the truth, the whole truth, and nothing but the truth.
That is what it looks like.
Especially when it comes to serving the interests of just some of the electorate, and not the whole electorate, who do not get the privilege of a regulator, mysteriously allowed to bypass the question of ‘why?’.

Somehow this sounds suspicious.... In the past, when faced with unruly serfs, the rulers simply placate them with whatever words they think will quell their fussing. Then, after the crowds disperse, they continue to do exactly what they planned to do in the first place.
It's a matter of setting up "output channels" only - messages are sent out to the populace, and no input is received. If it is, it is ignored.
So let's see how this transpires, and let's be prepared to keep the armies gainfully employed!