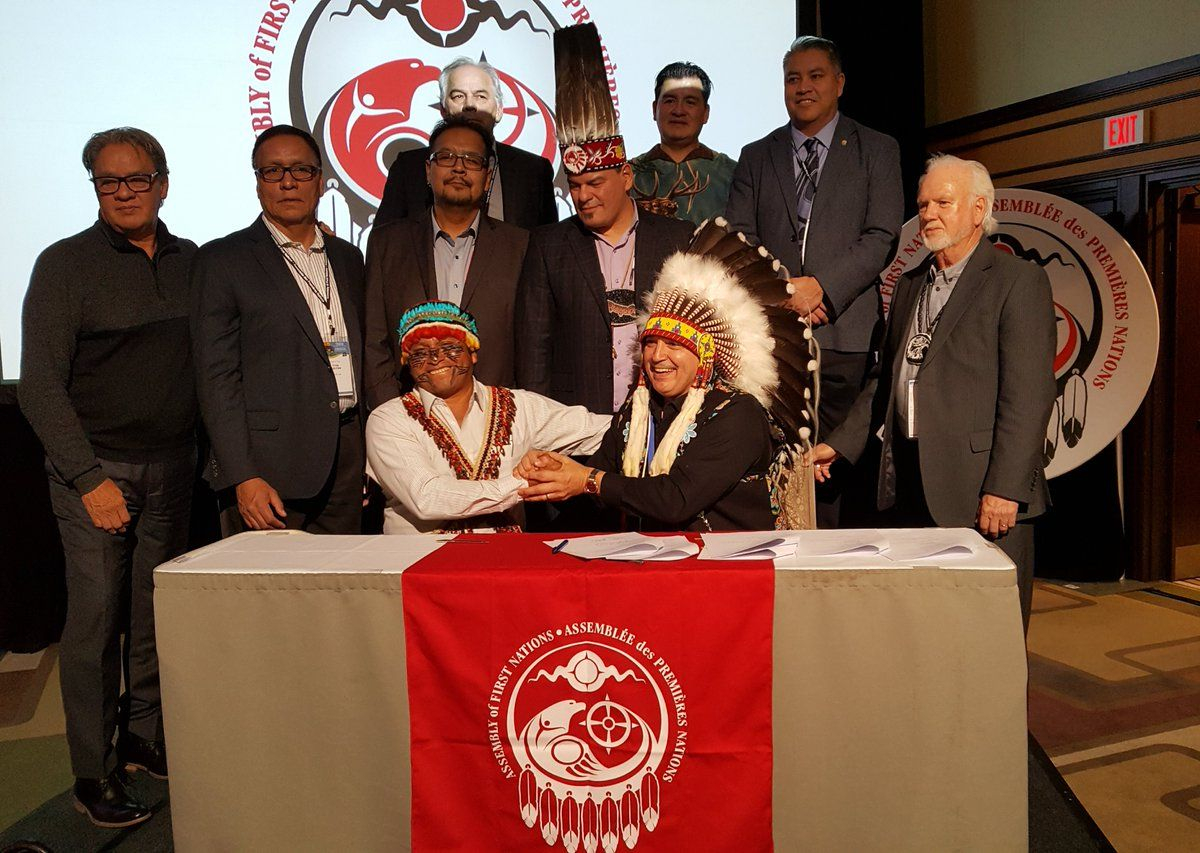 The Assembly of First Nations has teamed up with Indigenous groups from Ecuador on the Canadian battleground for one of the largest environmental claims in history.

The groups have united against “Chevron Corporation's campaign to evade a US$9.5 billion liability owed to rainforest communities,” the AFN said in a news release announcing a “protocol” with two organizations representing Ecuadorian communities.

Chevron has refused to pay US$9.5 billion as ordered by Ecuador’s top court several years ago for extensive environmental damages from the toxic waste of crude oil production decades ago. Citing a U.S. court ruling, Chevron says the Ecuadorian court order was obtained by fraud.

Villagers are seeking an enforcement order from courts in Canada, where the company has a subsidiary, Chevron Canada.

The AFN agreement was signed Dec. 6th in Ottawa by representatives of the AFN; the Confederation of Indigenous Nationalities of Ecuador (CONAIE), representing about 30,000 Ecuadorian Indigenous villagers; and the Front for the Defense of the Amazon, the community-based organization in Ecuador's Amazon region that launched a suit against Chevron in Ecuador on behalf of Indigenous and farmer communities.

In October, Ontario’s Court of Appeal denied a Chevron Corporation request that the Ecuadorian plaintiffs post a $1 million bond before proceeding with their case to collect the US$9.5 billion. The Ontario court ruling allowed the historic case to proceed in Canadian courts under the rule of "comity," the principle that nations uphold court decisions of foreign nations.

"This protocol is a profound step forward for Indigenous groups in both Ecuador and Canada to hold an irresponsible corporate polluter accountable for its actions in destroying Indigenous lands and cultures in the Amazon and around the world," Jamie Vargas said in the news release. Vargas is the national chief of Ecuador and the president of CONAIE.

The AFN support will include raising public awareness; helping with liaison to Canadian professionals, such as lawyers who are knowledgeable about Indigenous issue; and hosting Ecuadorian delegations in Canada, an AFN spokesperson said.

The case dates back to between 1964 and 1992 when, court documents say, Texaco, later acquired by Chevron, dumped at least 16 billion gallons of toxic wastewater into the rivers and streams of Ecuador's Amazon basin and abandoned some 900 toxic waste pits in the rainforest in violation of basic industry standards. Indigenous and campesino communities were left with poisoned land and drinking water. Inhabitants have suffered a cancer epidemic and birth defects throughout a 20,000- hectare zone that locals call the “Amazon Chernobyl.”

Chevron ordered to pay for reclamation and punitive damages

In 2011, Ecuador's Provincial Court of Justice of Sucumbíos province ordered Chevron to pay for cleanup, reparations, and punitive damages. An Appellate Court affirmed the judgment, and in 2013 Ecuador’s Court of Cassation (Supreme Court) upheld the judgment and established the amount owed at US$ 9.5 billion.

After losing the case, Chevron sold its assets in Ecuador and has since refused to pay. Morgan Crinklaw, a Chevron public affairs executive, said in correspondence with the author that the company has not paid because it believes the Ecuadorian judgment "was the product of fraud."

In 2014, Justice Lewis A. Kaplan of the New York District Court ruled that the Ecuadorian judgment was obtained by corruption and fraud. He agreed with Chevron Corporation’s accusations that the plaintiffs’ lead attorney, Steven Donziger, ghost-wrote the final court judgment and paid Ecuadorian judges to accept it. Kaplan’s ruling was confirmed by a higher court and the U.S. Supreme Court ruled last June that the plaintiffs could not try to collect the $9.5 billion via U.S. courts.

In 2013, when Ecuador's Court of Cessation (Supreme Court) reviewed and confirmed the earlier judgment, it chastised Chevron for initially trusting the Ecuadorian justice system but reversing course “with abuse and insults to the nature of this branch of government, arguing here and abroad, not only [without] jurisdiction, but also, without any evidence whatsoever, a 'dishonest and corrupt court system,' undermining the prestige of the judicial branch that functions through constitutionally created bodies in matters and litigations such as this one."

Donziger, the plaintiffs' lawyer, said in a phone interview: "Twenty-one appeals court and supreme court justices in Ecuador and Canada have affirmed the legitimacy of this case. We're not worried about U.S. Judge Kaplan's isolated, biased, and uninformed ruling." Jaime Vargas, president of (CONAIE) commented in an interview: "The only fraud committed in this case has been by Chevron, its law firms, and private investigators."

In 2015, the Supreme Court of Canada ruled that "an Ontario court has jurisdiction to determine whether the foreign judgment should be recognized and enforced in Ontario against Chevron."

Chevron claimed Canada had no jurisdiction, but under the comity principle, the Supreme Court allowed the case to go forward in Ontario's Superior Court of Justice.

Comity is the courtesy one nation gives another by enforcing its laws and court decisions. If a debtor in Canada flees to Germany, for example, the creditor can sue the debtor in a German court. Canada has a long tradition of respecting foreign judicial decisions. "Facilitating comity and reciprocity," says Canada's Supreme Court, form "two of the backbones of private international law."

Canadian lawyer Kurt Johnson, writing for the Canadian Legal Information Institute, said the Supreme Court decision "paved the way for an eventual road to recovery and accountability in what has been an epic pursuit of justice spanning over 20 years."

“The obligation created by a foreign judgment is universal," Supreme Court Justice Clément Gascon wrote in the unanimous decision. "The court merely offers an enforcement mechanism to facilitate the collection of a debt. . . . Legitimate judicial acts should be respected and enforced, not sidetracked or ignored."

The approach favoured by Chevron, that Canadian courts had no jurisdiction, “is sound neither in law nor in policy," the Supreme Court determined. "Canadian courts, like many others, have adopted a generous and liberal approach to the recognition and enforcement of foreign judgments."

When the case moved back into Ontario courts, four organizations filed “friend of the court” briefs supporting the villagers' right to pursue Chevron’s assets in Canada. The four were the International Human Rights Program at the University of Toronto law school, MiningWatch Canada, Canadian Centre for International Justice, and Justice and Corporate Accountability Project Interveners.

Having lost its jurisdictional challenge, Chevron moved for a "stay," asking the Ontario court to halt the legal process, claiming the original judgment was "fraudulent." The Ontario Superior Court halted the case, but the Ontario Court of Appeal overruled and allowed the case to proceed.

Chevron then asked the Ontario court to impose a nearly $1-million "costs order" on the Ecuadorian plaintiffs to cover Chevron's legal expenses should the plaintiffs' case fail. Lawyers for the Ecuadorians argued that Chevron's request was a "tactic to forestall the case," since Indigenous and farmer communities had no means of posting such a bond, while the alleged debtor Chevron earned billions in annual profits.

The Ontario judges agreed, denying Chevron’s request for the bond. “The history of this litigation, which has been ongoing for almost twenty-five years, makes clear that Chevron Corporation has and, it may be anticipated, will employ all available means to resist enforcement of the Ecuadorian judgment,” the court said. “This, of course, is within its rights. However, this reality makes it difficult to accept that the motion for security for costs was anything more than a measure intended to bring an end to the litigation.”

The Ontario court pointed out that "Chevron Corporation has sued some of the appellants' former third-party funders, and the funders withdrew their financial support." Further, the Court determined that "the environmental devastation to the appellants' lands has severely hampered their ability to earn a livelihood. If we accept the findings that underlie the Ecuadorian judgment - findings that have not yet been undermined in our courts - Texaco Inc. [later Chevron] contributed to the appellants' misfortune."

“Courts must be vigilant," the Ontario judges wrote, "to ensure an order that is designed to be protective in nature is not used as a litigation tactic to prevent a case from being heard on its merits." Finally, they concluded that "the interests of justice require that no order for security for costs be made.”

The Ecuadorian leaders were invited to the Ottawa AFN meeting by Phil Fontaine, former AFN national chief, during his visit to Ecuador in September. "We saw the evidence of Chevron's destructive behavior, and the impact on the people, land, and water,” Fontaine, told CBC. "We have organized an alliance with 60 Amazon tribes to help them recover the debt owed by Chevron."

Grand Chief Edward John, hereditary Chief of Tl'azt'en Nation in British Columbia, also travelled to the Ecuadorian Amazon. "Our peoples have faced similar devastation in Canada," he said at a media briefing in Ecuador, "and we will do everything we can to bring justice to Indigenous peoples in both Canada and in Ecuador."

The $9.5 billion collection case continues in Ontario's Supreme Court of Justice. “I am honored to represent some of the Indigenous persons who have been harmed by the highly irresponsible oil activities of Chevron in the Amazon rainforest of the Ecuador,” plaintiff lawyer Peter Grant said in a media statement. “We are going to urge all courts in Canada to reject Chevron’s obstructionist tactics and move this case to a final resolution as soon as possible.”

An invaluable piece of

An invaluable piece of reporting.....and quite shocking as well. Are these same crooks and snivelling criminals digging about in our water and food sheds? Because if they are, and if current trends continue, Canadians should be aware.

They will play any kind of dirty game, to prevent having to clean up their messes.

One last thing: we could use some investigative reporting on the American judge who let them off, projecting fraud onto the plaintiffs. I'd be very surprised if I'm wrong about how he votes, but it would be interesting to see the data. The collusion of judicial systems with Big Extractivists needs to be made public; democracy depends on more of us making the connections between our political leaders and polluting industries that make environmental messes, then walk away with billions in profit.