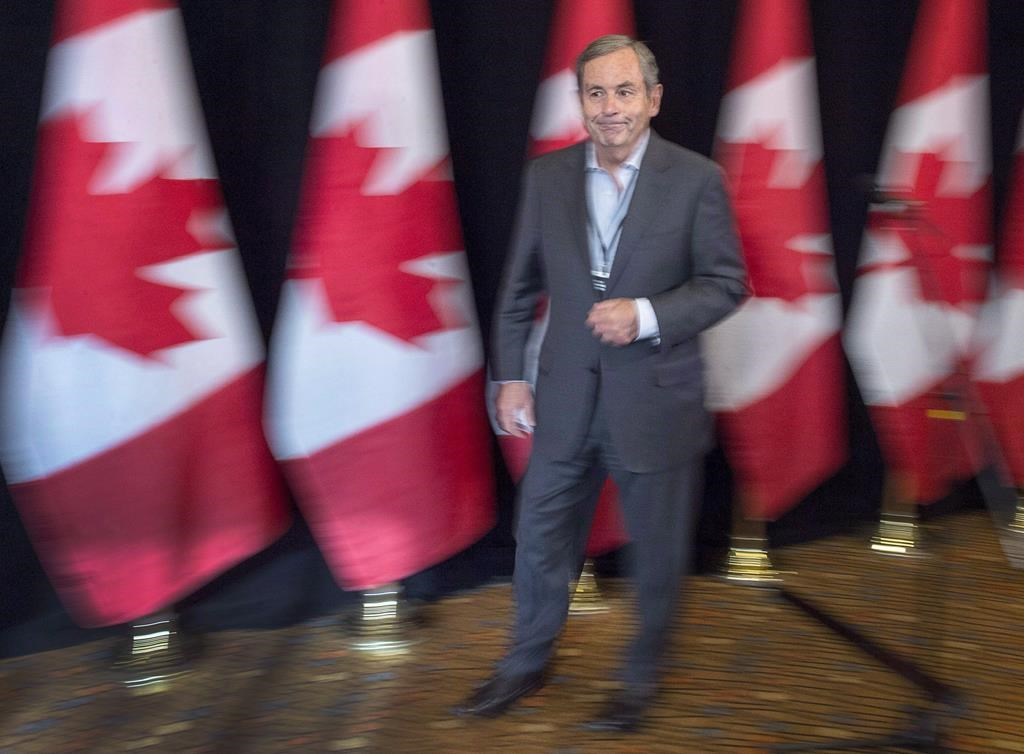 David MacNaughton, Canada's ambassador to the United States, heads from the microphone after talking to reporters as the Liberal cabinet meets in St. John's, N.L. on Tuesday, Sept. 12, 2017. File photo by The Canadian Press/Andrew Vaughan
Previous story
Next story

The Canadian and British governments appeared before a U.S. tribunal Monday arguing against the imposition of duties on Bombardier planes, in a hearing highlighting the more aggressive use of trade remedies in Donald Trump's America.

Canada's ambassador to Washington said potential duties of up to 300 per cent on Bombardier's C-Series jet are illegitimate as he urged the U.S. International Trade Commission to cancel them in its final impending determination.

First, David MacNaughton said the case that imports of the Bombardier jet would cause material injury to rival Boeing is based on speculation and conjecture — prohibited not only under U.S. law but also by World Trade Organization rules.

Moreover, he told the commission there's no evidence Bombardier planes will be exported to the U.S.; that the C-Series does not compete with Boeing aircraft; that Boeing has a seven-year backlog in sales, invalidating its claim of an injury; and that duties would ultimately hurt Americans, as Bombardier accounts for 23,000 jobs in nine U.S. states.

The British ambassador to the U.S., Kim Darroch, made a similar case, and added another shot at Boeing: He argued that it has benefited from billions in government support via different U.S. mechanisms, while it complains about subsidies elsewhere.

MacNaughton said the case has broader implications. Speaking to reporters outside the hearing, he said anti-trade rhetoric in the U.S., not just from the Trump administration, has emboldened companies to launch commercial attacks on their foreign rivals.

"What we are seeing is because of, in large measure, the rhetoric that exists in the United States at the present moment — and I'm not just referring to one source of the rhetoric, I'm talking broadly of the anti-trade rhetoric — it has given U.S. companies the permission to take action they wouldn't have taken before," MacNaughton said.

"The real danger of this is it's going to have a negative impact on U.S. jobs."

The Trump administration itself has boasted about how trade complaints like Boeing's have surged since it took office.

Boeing argued that Canada is the one practising unfair trade.

The company said government subsidies have allowed its Canadian rival to infringe on potential markets; that C-Series sales are already hurting orders; and that the recent Bombardier-Airbus partnership to build in Alabama is a ruse that would disappear if duties are rescinded.

The president and chief executive officer of Boeing Commercial Airplanes, Kevin McAllister, said it's hard to compete against a company with a bottomless reservoir of support from foreign taxpayers.

"Boeing makes the best airplanes in the world. But we can't compete with companies funded and backed by governments," McAllister said.

"In a fair competition, I'll bet on Boeing, our U.S. employees, and the U.S. industry every time. But we should only have to compete against private companies — not governments and the airplanes they create and produce through endless subsidies."

He cited some examples of competing against a government. For example, he pointed out that the Canadian government recently cancelled a big military contract for Boeing Super Hornets, in retaliation for its trade complaints against Bombardier.

He also argued that Delta was poised to buy used planes in a package being assembled by Boeing — before Bombardier swooped in with an unbeatable offer, its unrealistically priced planes backed by government subsidies.

He also cast this fight as something bigger. The Boeing executive explained how he grew up in Bethlehem, Pa., and saw the iconic Bethlehem Steel company shut down a generation ago, killed slowly by a variety of factors including dumped foreign steel.

In his closing remarks, he said he now keeps a painting of the old plant in his office.

"This left an impression on me."