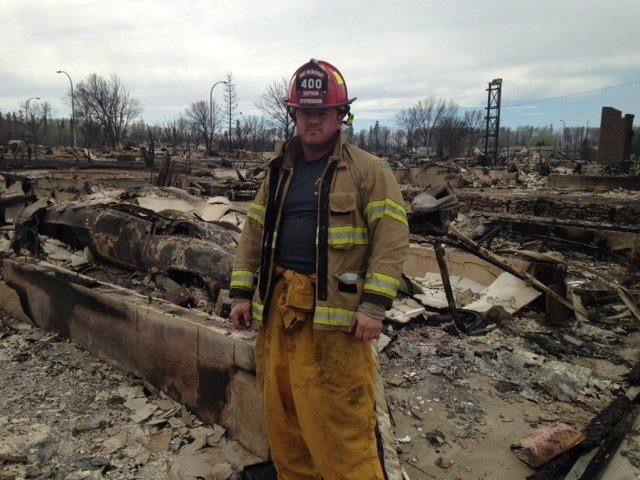 For firefighter Mark Stephenson, shown in this handout image, the Alberta oilsands capital is his home and he plans to rebuild on the same spot where his house went up in flames. Handout photo by The Canadian Press
Previous story
Next story

Firefighter Mark Stephenson says he can't drive through Fort McMurray without being brought back to May 2016.

That's when, in the thick of battling a ferocious wildfire that destroyed 10 per cent of the northern Alberta city, he paused from his work to film his family's home engulfed in flames.

"Every turn of a corner on the street here is a memory back to that day," he says more than 1 1/2 years later.

Stephenson had hoped that by this Christmas, he, his wife and their two young children would be settled into the house they're rebuilding. But a recent cold snap slowed construction and it's going to be another two or three months.

He sometimes finds himself reaching for a memento — a teddy bear from childhood, a body-building trophy — that no longer exists. He says he's generally OK, but there are some tough days on the job. He says he has benefited from counselling the fire department has arranged for its staff.

"A lot of people are over it and past it and that's great. But it's not the same for everyone. There are some people out here who are still hurting."

The debris has been cleared and vacant lots are gradually being filled with new homes in Fort McMurray. But as time erases the physical scars of the fire called The Beast, mental and emotional ones remain for many who experienced the costliest disaster in Canadian history.

Care providers with the addiction and mental-health branch of Alberta Health Services had 38,777 client contacts in the region between May 10, 2016, and this past Oct. 31 — about one-third higher than the tally the agency reported in March of this year. There is no comparable data for before the disaster.

Vincent Agyapong, with the University of Alberta's psychiatry department, has been studying the mental-health impact of the fire.

Of 486 adults surveyed in November 2016, the rate of probable post-traumatic stress disorder was 12.8 per cent. It would have been less than one per cent under normal circumstances, Agyapong said. Rates of probable depression and anxiety were also high.

Agyapong says city residents suffering from PTSD may have nightmares or become anxious at the sound of sirens.

"Some deliberately avoid going to places that remind them of the devastating impact," he says. "I've seen quite a number of patients who have left Fort McMurray because ... the city as a whole reminds them of the trauma that they went through during the wildfire."

Agyapong says he gets more referrals now, when he spends one week a month in Fort McMurray, than he did when he was working in the city full time before the fire.

Calls to the Some Other Solutions 24-hour crisis line have gone up drastically, says health and wellness manager Linda Sovdi.

Increased need is likely to be one reason, but people may also be more aware of the resources available and more comfortable asking for help than they were pre-fire, she says.

They're also more likely to open up to someone who went through what they did, she suggests.

"When I'm talking to somebody about the first firepit that I smelled after the fire, it's like there's a heightened awareness. People know you get it."

The infusion of nervous excitement in the fire's immediate aftermath has worn off.

"Fort McMurray is resilient, but tired."

The regional municipality, which includes the city of Fort McMurray and surrounding communities, estimates its permanent population at 75,000 to 77,600. Its 2015 municipal census stood at almost 82,000.

At the beginning of this month, new foundations were in for just over half of the 2,579 dwellings that were destroyed. About 10 per cent have made it to final inspection.

"I'm never going to be fully satisfied with what I'm seeing until everybody has moved significantly forward," says Mayor Don Scott, who won the race to replace longtime mayor Melissa Blake in October.

Scott says while there is clearly a lot of work to do, the general mood in the region is one of optimism.

"I think we're sensing that the best days are ahead of us, and I believe that to my core."