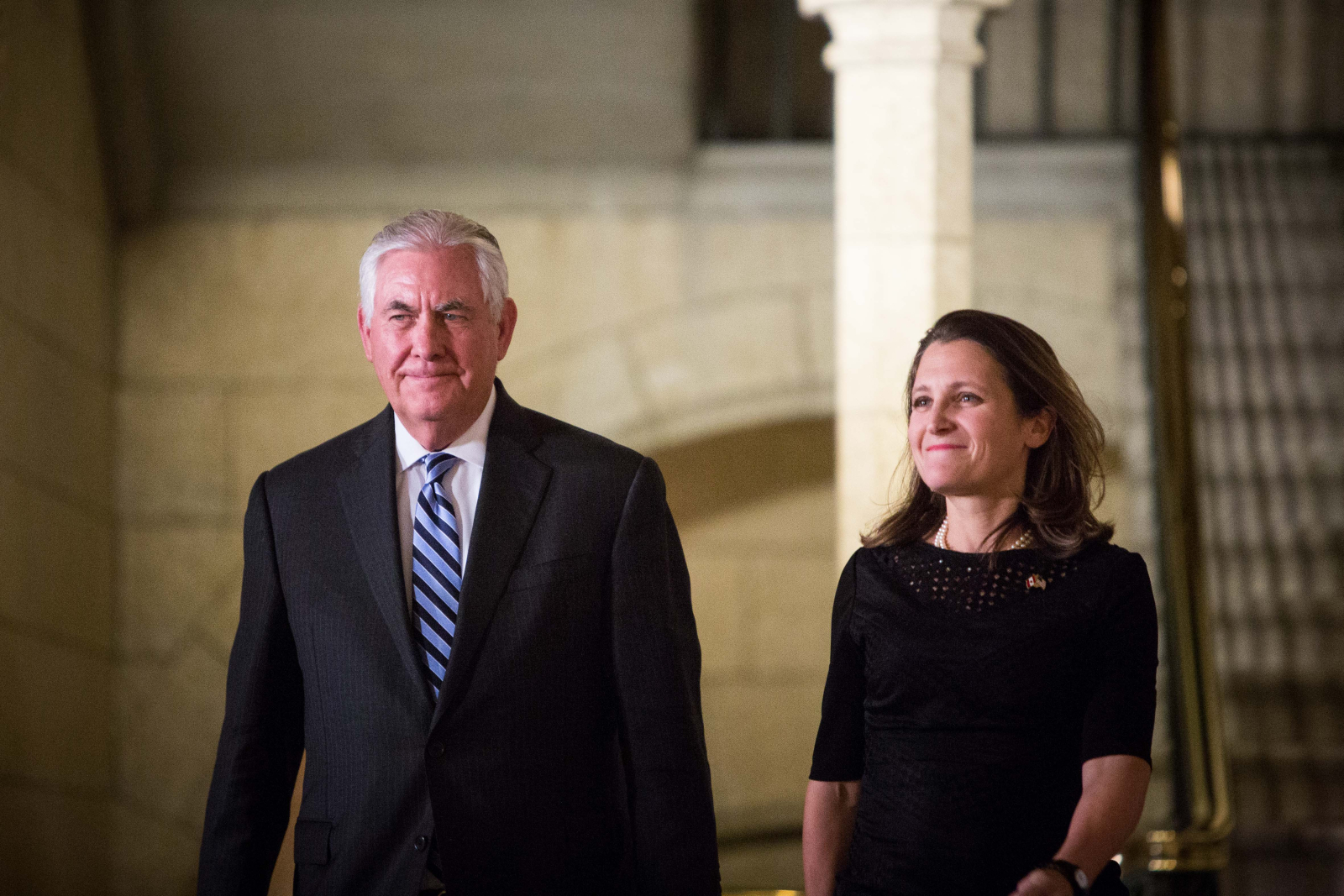 Rex Tillerson used his first visit as Washington’s top diplomat to snowy Ottawa on Tuesday to announce that the United States and Canada will host an international meeting on the North Korean nuclear crisis next month.

The laser focus on the danger posed by North Korea came a day after President Donald Trump's White House removed climate change from the list of worldwide threats menacing the United States in a new national security strategy.

Tillerson, the U.S. secretary of state, held a day of meetings in Canada's capital, talking with officials at the headquarters of the foreign affairs department, including Foreign Minister Chrystia Freeland, as well as Prime Minister Justin Trudeau.

Appearing with Freeland in the Christmas-decorated House of Commons foyer on Parliament Hill at dusk, the secretary appeared at times jovial, and other times serious, as he spoke of a “close shared vision” between Canada and the U.S. as well as the desire to “send North Korea a unified message.”

“This pressure campaign will not abate,” said Tillerson, referring to heavy-handed diplomacy with a nuclear North Korea.

The #USCanada relationship is vitally important to both our countries. Discussions today have demonstrated the continuing strength of this relationship. #FriendsPartnersAllies pic.twitter.com/f1WNgK000L

Tillerson, who had previously travelled to Canada numerous times in his previous role as chief executive officer of U.S. oil giant ExxonMobil, also noted the importance of strong economic ties between Canada and the U.S. as an important source of jobs on both sides of the border.

After his press conference with Freeland, Tillerson met with Trudeau in his Parliament Hill office.

Trudeau said the meeting was an opportunity to discuss mutual collaboration on global issues including North Korea, and noted the important trade relationship between Canada and the U.S. Tillerson said Canada was an important partner economically with regards to the two countries' approach to national security.

But the nuclear crisis was expected to be the main focal point of talks during Tillerson's visit. Standing alongside the secretary, Freeland appeared upbeat, and enthusiastically nodded several times as Tillerson spoke about Canada-U.S. ties.

She said the two “spoke at length” about North Korea, and called a diplomatic solution to the nuclear stand-off “the only outcome for the whole world."

“I’m pleased to formally announce today that the secretary of state and I have agreed that on Jan. 16, Canada and the United States will co-host in Vancouver a meeting of foreign ministers from around the world,” said the foreign minister in her remarks.

It will be “a demonstration of international solidarity against North Korea’s dangerous and illegal actions,” she added.

The meeting, which Tillerson dubbed the “Vancouver Group,” will occur on Jan. 16, 2018 in the west coast city, and bring together foreign ministers from Japan and South Korea, as well as other countries who fought in the Korean War.

On Monday, the Trump administration declared that North Korea was behind the "WannaCry" cyber attack that affected hundreds of thousands of computers this year. Freeland noted that the two discussed the issue but didn't provide more details.

The new strategy does not contain the phrase “climate change.” Instead, it positions U.S. policy against “an anti-growth energy agenda,” and said the government should be focused on promoting energy exports. It specifically calls for “unleashing” the country’s “coal, natural gas, [and] petroleum” — along with “renewables and nuclear” — to stimulate the economy.

Seemingly adding to the list of phrases being banned in the U.S. government, the document refers to “traditional pollution” but does not extend the use of the word “pollution” to carbon-based forms.

“The United States will remain a global leader in reducing traditional pollution, as well as greenhouse gases, while expanding our economy,” the report states. In the next sentence, it makes clear these cuts would not come from “onerous regulation.”

The U.S. Centers for Disease Control and Prevention has been barred from using a list of forbidden words and phrases such as “science-based,” “fetus,” and “transgender," according to a report in the Washington Post. The U.S. Department of Health and Human Services has subsequently said that was a "complete mischaracterization."

The Trump administration is also moving to yank mentions of climate change off U.S. government websites.

'An abdication of U.S. leadership'

It also had an entire section under its “security” chapter titled “confront climate change,” calling it “an urgent and growing threat to our national security, contributing to increased natural disasters, refugee flows, and conflicts over basic resources like food and water.”

American military strategy has acknowledged the threat of climate change for years. A 2015 Pentagon report, for example, explicitly called climate change a “threat multiplier” and said it agreed with the UN’s conclusion that “climate change will have the greatest impact on areas and environments already prone to instability.”

Tillerson himself signed a declaration in May highlighting the importance of tackling climate change, “noting with concern that the Arctic is warming at more than twice the rate of the global average” and “reiterating the need for global action to reduce both long-lived greenhouse gases and short-lived climate pollutants.”

U.S. experts also acknowledge that climate change is connected with national security. A report released this month by the U.S. National Oceanic and Atmospheric Administration showed that the Arctic “has reached a new normal,” showing “no sign of returning to [the] reliably frozen region of recent past decades.”

The director of the U.S. Naval War College’s Arctic studies group, Walter Berbrick, also called the trend of a warming planet “disturbing and real” in a speech this month. He said the U.S. can’t “rebuild every sinking city, patrol every receding coastline, or accept every immigrant by itself...this is not just about our security. It's about the security of our global commons.”

"Climate change is a threat to our national security and it is here to stay for decades to come unless we exercise great leadership," said Berbrick in an interview with National Observer.

"Failure to acknowledge climate change is an abdication of U.S. leadership."

Canada's ambassador to Washington argued in front of a U.S. tribunal Monday on a case affecting Montreal-based Bombardier. Canada recently announced it was changing its military procurement strategy and declined an offer to buy fighter jets from Boeing, a U.S. aerospace firm connected with the Bombardier case.

Meanwhile, the lumber industry, already weathering a renewed softwood lumber dispute, could be hit in the next few weeks by new duties on billions of dollars of newsprint exports to the United States, its trade associated warned Monday.

The two countries are also continuing to hammer out a new North American Free Trade Agreement with Mexico. Canada's NAFTA negotiators went on a mission to Washington this month, between formal rounds of talks.

Tillerson spoke of the "most extensive trading relationship" between the two countries.

In general, he said “I've lost track of the number of meetings” he had with Freeland this year, and grinned.

Under Trump, climate change not a national security threat