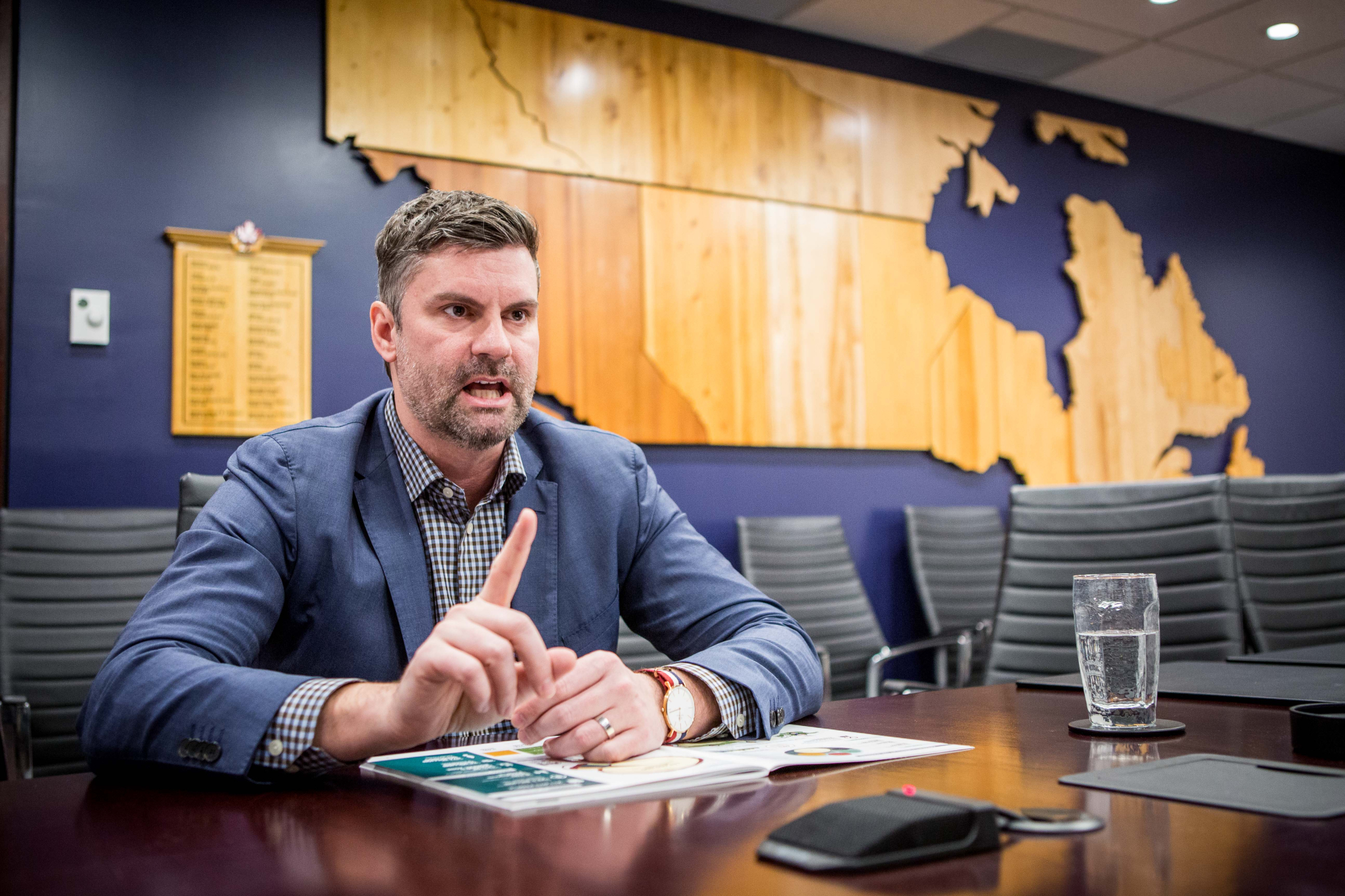 Forest Products Association of Canada CEO Derek Nighbor in his office in Ottawa on Dec. 18, 2017. Photo by Alex Tétreault
Previous story
Next story

Canada could be hit in the next few weeks by new duties on billions of dollars of newsprint exports to the United States, the lumber industry warned on Monday.

Derek Nighbor, CEO of the Forest Products Association of Canada (FPAC), said in an interview that he’s anticipating that Washington will slap preliminary countervailing duties and anti-dumping duties on Canadian newsprint exports “in early to mid-January.”

“This kind of protectionist, silly time we’re in, as far as Canada-U.S. trade goes — it’s pretty frustrating," said Nighbor at the FPAC office in Ottawa on Dec. 18.

American authorities appear set to issue duties on Jan. 8 and Jan. 16, 2018 on what's known as "uncoated groundwood paper," which is used in newsprint and book publishing.

The U.S. International Trade Commission ruled in September that American producers of newsprint are being “materially injured” by “subsidized” Canadian imports, giving the green light to move ahead with imposing preliminary duties.

FPAC, the trade association for Canada’s wood, pulp and paper industry, calculates that Canada exports $2.5 billion worth of newsprint to the U.S. every year. Most of the mills are in Ontario and Quebec, Nighbor said.

“It stands to have impacts that we think could be worse than softwood lumber,” he added.

“Being hit with preliminary duties in January on newsprint could be a really big blow, directly and indirectly, to about 25 mills in Canada...softwood lumber’s a concern, [but] this is something we didn’t anticipate on the newsprint side."

The softwood lumber dispute has sucked up political oxygen in Ottawa as officials fought back against anti-dumping and countervailing duties on Canadian producers that were imposed by Washington this spring.

Canada has challenged the finding under international rules and under the North American Free Trade Agreement (NAFTA)’s dispute resolution process.

"We will stand shoulder to shoulder with the forestry sector in Canada," Natural Resources Minister Jim Carr told reporters in Ottawa earlier this month.

But adding to the complexity is the fact that Canada is currently re-negotiating NAFTA, and the U.S. reportedly wants to see that dispute resolution process scrapped.

Nighbor, who said he’d like to see that process kept in a new NAFTA, said he’s not expecting either a softwood deal or a NAFTA deal anytime soon.

On softwood, “the question is, when is the time right? And I don’t think we’re anywhere close right now,” he said. On NAFTA: “I don’t think there’s a lot of promise for anything anytime soon.”

But he also acknowledged demand for softwood lumber is high. U.S. builders have started replacing or renovating homes damaged by flooding from several hurricanes that ravaged the region this year, he said.

“We’re expecting that to carry us into 2018,” he said. “But if the trade dispute drags out three or four years, we remain concerned about the impacts that could have on the sector.”

During the interview, Nighbor also dismissed criticism from scientists who have accused the industry of dragging its feet in taking steps to protect endangered caribou.

He also touted the industry's efforts to fight climate change, noting that forestry companies were facing challenges due to the impacts of global warming, but that they were ahead of other sectors in the Canadian economy when it comes to cracking down on their carbon footprint.