Volunteers rush to beach to help whale: 'I had to ask people to slow down' 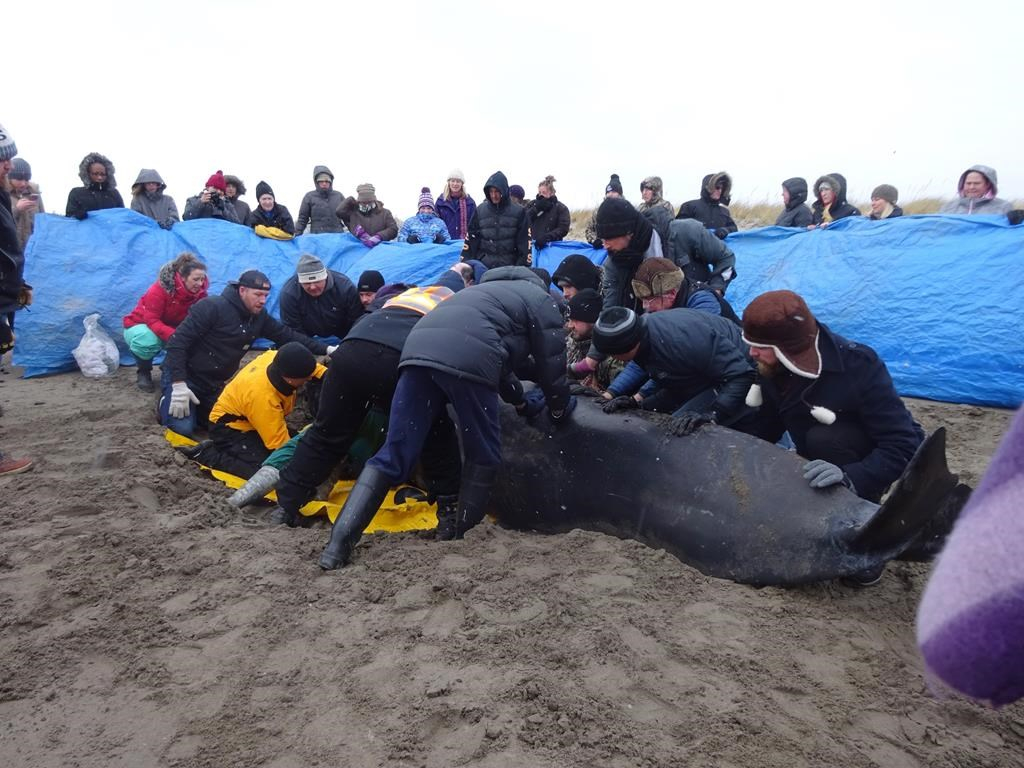 Dozens of volunteers help a pilot whale that washed up along a Nova Scotia beach back into sea in Cow Bay, N.S. on Mon. Jan. 1, 2018. Handout photo by The Marine Animal Response Society/Beverly Reid
Previous story

Dozens of volunteers — including surfers, police, fisheries officials and passersby — raced to a Nova Scotia beach on New Year's Day to help return a stranded pilot whale back to sea.

"The number of people that came out was great and everyone was willing to work together and give this animal its best chance," Andrew Reid of the Marine Animal Response Society said Tuesday.

Reid said the whale, which could weigh between 1,500 to 2,000 kilograms, was first spotted at about 9 a.m. Monday on Rainbow Haven Beach in Cow Bay by someone out for a stroll.

The local resident sent Reid pictures of the animal — a male pilot whale that appeared to be in fairly good condition.

Reid headed to the area with his rescue gear, as a call went out on Facebook for people join in on the effort to remove the whale from the beach, which is about a half hour from downtown Halifax.

The response, he said, was surprising as roughly 100 volunteers descended on the popular beach to pitch in.

"We definitely had more than enough people to pull it. I had to ask people to slow down when we were initially pulling it off the beach because we were practically jogging with the animal!"

Reid inspected the whale, which showed no signs of injury or sickness and responded well to awareness tests. With a laugh, he added that the whale was "actively defecating" during the rescue, a good sign since it indicates he had been eating.

The volunteers laid a flotation pontoon next to the animal and carefully rolled it onto a mat before dragging it off the beach. Reid, some volunteers and a few surfers in wet suits walked the animal out into deeper water before releasing it.

They also had to erect a windbreak to shield it from bitter winds, and cover it in blankets as it appeared to be getting frostbite. He said the animal was breathing rapidly, which was likely due to the stress of being surrounded by people.

"After the animal was refloated and left the area, we went up the coast and talked to a few people who saw the animal swimming by, heading out to deeper water," he said. "As far as we know he left the area and can hopefully find its pod or another pod again."

Reid said the whale, a male adult, may have become stranded after trying to navigate the area's shallow sandbars just offshore. He said the highly sociable species normally travel with family or in groups of up to about 50 whales.

There are concerns the lone whale could return.

"Given the time of year and that it was alone, we are worried it may turn up again."

Pilot whales don't normally stay in the area at this time of year. He said they tend to feed off the western shore of Cape Breton in the summer before heading much further south to their wintering grounds.