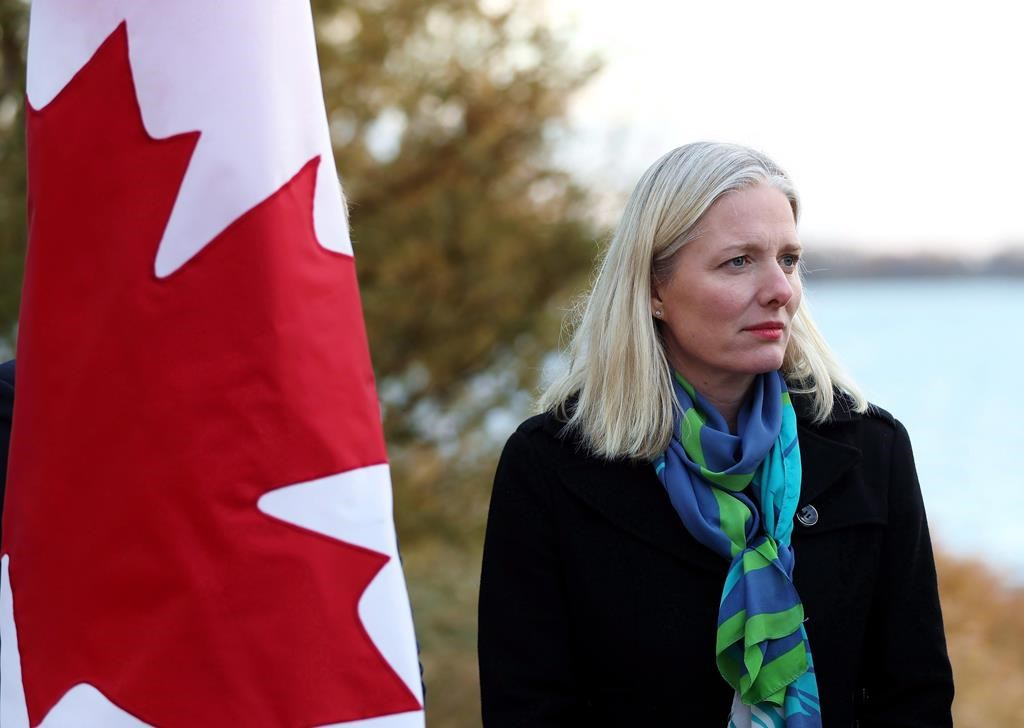 The Trudeau government has unveiled its draft of a mammoth new law that would put in place a system to track and price carbon pollution from fossil fuels and industry.

Environment and Climate Change Minister Catherine McKenna and Finance Minister Bill Morneau announced a draft version of the Liberals’ “Greenhouse Gas Pollution Pricing Act” on Jan. 15. The document, which runs over 200 pages, touches on everything from charging producers and distributors for fuels like gasoline, diesel, or natural gas, to pricing for industrial polluters.

The draft law paints a picture of an elaborate program with provisions for enforcement, payments, rebates, exemptions and vetting of provincial systems. But it is quiet so far on two specific sectors — electricity and offshore oil and gas — which officials say will be dealt with later.

She said Canadians have been seeing the impact of climate change increasing the severity of forest fires and floods, and costing the country billions of dollars. “We need to take action, and we need to do it in a smart way."

The government will now listen to public feedback on the document through Feb. 12. Separately, it is seeking feedback on related proposed system for large industrial facilities, through April 9. Feedback can be submitted at the email addresses listed here.

The legislation has not yet been tabled in Parliament, which resumes sitting in a few weeks. McKenna said the legislation will be introduced "after February" but a date hasn't been set yet.

The move represents the latest step in the Liberals’ promise to bring in carbon pricing nationwide, part of what it calls its “pan-Canadian” strategy. The government says it wants to establish a system that will return “all direct revenues” to the provinces or territories.

In May 2017, McKenna rolled out a “technical paper" that described the ins and outs of the system. Government officials had said at the time that the legislation would be introduced this past fall.

The detailed system means, for example, measuring many different facilities for their greenhouse gas intensity, noted Dale Marshall, national program manager at Environmental Defence. For comparison’s sake, a less complex system would be an excise tax, like the federal gas tax.

“The cost of monitoring all of this are going to be quite significant compared to just having a carbon price,” he said in an interview.

Marshall also said it was good to see Canada was getting a nationwide price on carbon, especially given that the draft law appeared to tackle emissions used in industrial processes as opposed to just fuels.

McKenna said the long list of federal rules was necessary to implement so companies don’t simply shift work abroad where pollution rules might be more lax.

“We could have just designed a system that had a pure price, but we felt that having a standard was just a smarter approach,” she said.

“We don’t want to send Canadian companies abroad to pollute, we wanted to create the incentives for them to reduce emissions, and also to innovate and to use Canadian clean solutions — and that’s why we decided on the competitiveness standard.”

Ontario, Quebec, British Columbia and Alberta already have carbon pricing schemes in place. If their systems meet the federal standard in 2018, they will be permitted to keep them; the proposed federal law will then apply to provinces and territories that either don’t meet that standard, or request that it be used instead.

Chris Ragan, chair of Canada's Ecofiscal Commission, agreed the output-based mechanism was important for competitiveness. He said Ecofiscal’s research showed it wasn’t a huge deal economy-wide — only about five per cent of GDP comes from sectors that are highly exposed to risk on carbon pricing — but it was very different across provinces.

“In Alberta and Saskatchewan, it’s about 18 per cent, and in Ontario and British Columbia it’s one-and-a-half percent," he said. "It’s a much more important issue for [Alberta Premier] Rachel Notley."

He said a well-designed carbon pricing system requires that the government pay attention to what the price is going to do to the competitiveness of its emissions-intensive sectors.

“It was an important part of what came out today,” he said. “What you really want to do is keep your firms in business, but also give them the incentive to reduce emissions, and that’s exactly what this system does.”

The announcement comes on the heels of a Jan. 7 fundraising email from the opposition Conservative Party, titled “fight the carbon tax,” which declares that “all Canadians can now expect to pay more for everything” and warns of higher prices for groceries, gas and other essentials.

The Canadian Press “Baloney Meter” gave that pitch a rating of "a lot of baloney,” as not everything will be impacted, such as power from renewable sources, and due to a rebate system that will kick in to offset many purchases.

In the interview, McKenna countered that governments of different stripes have put a price on pollution across the country.

She also reminded the federal Conservatives that almost all of them had agreed in a June 6, 2017 Parliamentary vote that "Canada remain committed to the implementation" of the Paris climate agreement.

“Pricing has to be part of any solution that’s going to meet our international commitments,” said McKenna.

Power, offshore oil and gas not yet dealt with

A related statement from the government notes that “consideration is being given to how to apply carbon pricing to offshore oil and gas production and to electricity generation.”

A federal government official close to the legislative development process confirmed to National Observer that the government has not yet determined how it will deal with either sector.

“We are still considering how to deal with those under this system,” said the official, who was not authorized to speak on the record.

Newfoundland and Labrador will unveil its carbon pricing scheme this spring. Its large Hebron offshore oil project produced its first oil in November.

Provinces and territories are expected to confirm their use of the federal system in writing by March 30, 2018, the federal government said in a letter to those jurisdictions.

For those areas that want to use their own system, they will be expected to show how their systems meet federal standards by Sept. 1, 2018. The federal government will then confirm if the systems meet the criteria.

From 2019 on, the government also expects to hold an "annual verification process" to make sure the systems continue to meet federal requirements.

Ragan at Ecofiscal Commission said it was important to note that most of Canada’s electricity system was non-carbon emitting, with coal-fired facilities in Alberta, Saskatchewan and New Brunswick being the three major exceptions.

A federal system could kick in with Saskatchewan, he said, but Alberta’s coal-fired electricity is covered by its provincial policy, so the federal system wouldn’t kick in anyway, as least not as things stand. Meanwhile, New Brunswick is determining how it will "repurpose" existing taxes.

Given that the provinces have to make a commitment by this summer, “we still have time,” he noted.

Editor's note: this story was updated at 7:45 p.m. EST to include additional information and comments.

How will Trudeau's government

How will Trudeau's government make the polluters pay for their past intransigences? These are the contaminated lands and waters of the polluters' abandoned oil and gas wells, and their leaks, spills and releases; mines, industrial ghettos, that have not been remediated, and land owners not compensated for their damages and losses?

McKenna stated, "Today, we're following through on our commitment to put a price on carbon pollution across Canada, with federal legislation and a practical approach to protect competitiveness for large industry,”

Demons created in the past need to be exorcised before excusing the irresponsible current and future actions of large industry, rather than "protecting" and perpetuating their pollution.

I agree completely. The

I agree completely. The current multi-stage, high pressure horizontal fracking in Alberta is damaging our environment as we write; the wells are not considered "large emitters" despite their cumulative effects on air, water and soil, and may slip through proposed legislation. Past and current pollution must be addressed, and activities like fracking, which has been banned in more enlightened jurisdictions due to "Extreme risks to public health at all stages of operations" - Governor Cuomo of New York State - must be stopped.

Fracking gets another free

Fracking gets another free pass under this draft legislation as fugitive methane emissions and methane venting are not covered.