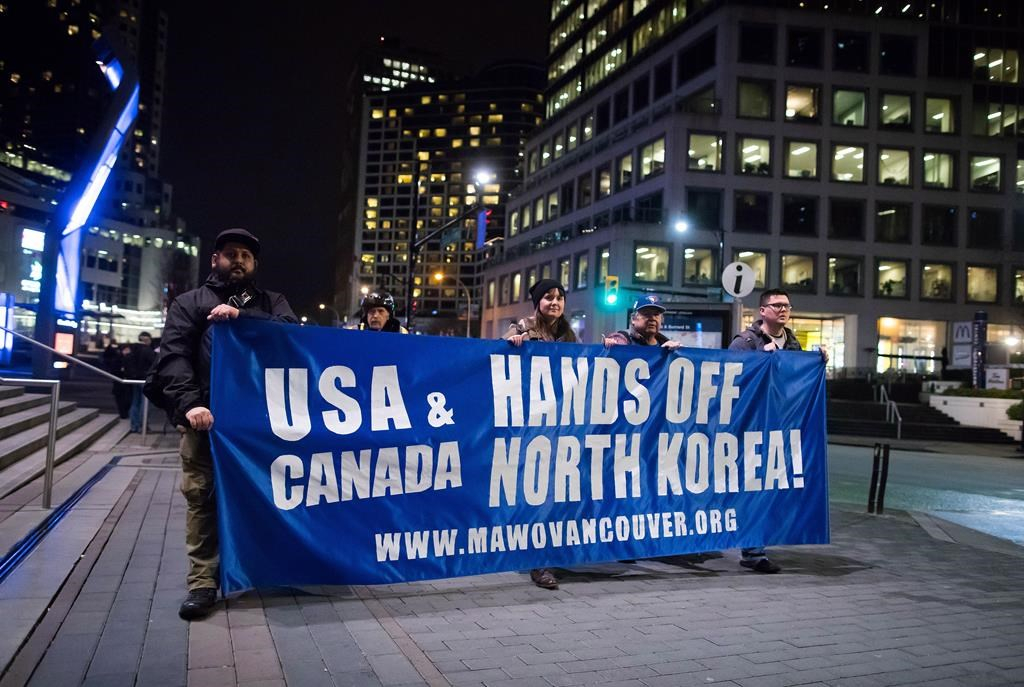 Protesters carry a banner while marching outside the site of a summit on North Korea being hosted by Canada and the U.S. in Vancouver, B.C., on Mon. Jan. 15, 2018. Photo by The Canadian Press/Darryl Dyck
Previous story
Next story

A gathering of foreign ministers in Vancouver today to discuss the perils posed by North Korea is expected to focus on sanctions, non-proliferation and diplomacy.

Eric Walsh, Canada's ambassador to Korea, says ministers will aim to identify which sanctions are being evaded and how to improve enforcement, while also discussing possible diplomatic solutions.

He says non-proliferation is also a key topic, and participants will look at recent developments in North Korea's nuclear program and what they mean for the region and the international community.

The federal government has faced criticism for not inviting Russia and China to the summit, which instead brings together ministers from countries that supported the United Nations force in the Korean War.

Walsh says the conference is not meant to replace other discussions that are taking place, including at the UN Security Council, and instead it is meant to complement those talks.

He says there's "no question" that China and Russia have critical roles to play in North Korea and the summit, co-hosted by Canada and the U.S., was not intended to exclude them.

"We very much hope we'll be able to dialogue with them at a later date about what we're able to do here and find ways to stay engaged with them," he said.

Walsh made the comments at a panel discussion convened by the University of British Columbia on Monday, ahead of the conference that begins today.

Brian Gold, a University of Alberta history professor, said the summit is less about North Korea, to some degree, and more about Canada and South Korea as middle powers promoting a multilateral approach.

He said multilateralism was the intent of the United Nations alliance during the Korean War.

"I think it's a great success in just that it's happening," he said of the conference.

"But true, yes, a greater success if it provides a rationale for an ongoing existence (of the alliance) and helps with some of these problems which have been identified."

However, political science Prof. Brian Job of the University of British Columbia said the meeting puts Canada in a "delicate tension."

"On the one hand, we're onside with concerns over North Korea's nuclear weapons, we back the sanction regime, we support Secretary of State (Rex) Tillerson's ... diplomatic approach in Washington," Job said.

"But on the other hand … our interests in being seen as a middle power in this circumstance is not advanced by being seen as an instrument of U.S. agenda, advocating a one-note, hard line extreme pressure strategy, and I think particularly in convening meetings in which key players are not involved."

Prime Minister Justin Trudeau conceded Monday that both China and Russia will be integral to securing peace on the Korean peninsula, even as he defended the decision to leave the two countries out of the gathering.

Trudeau made the remarks after Russia became the latest to slam the meeting as a threat to peace efforts.

China, meanwhile, has already derided as "Cold War thinking" the involvement of only those allies that supported South Korea during the Korean War.

These women experts are ready and waiting. Where is their invitation?