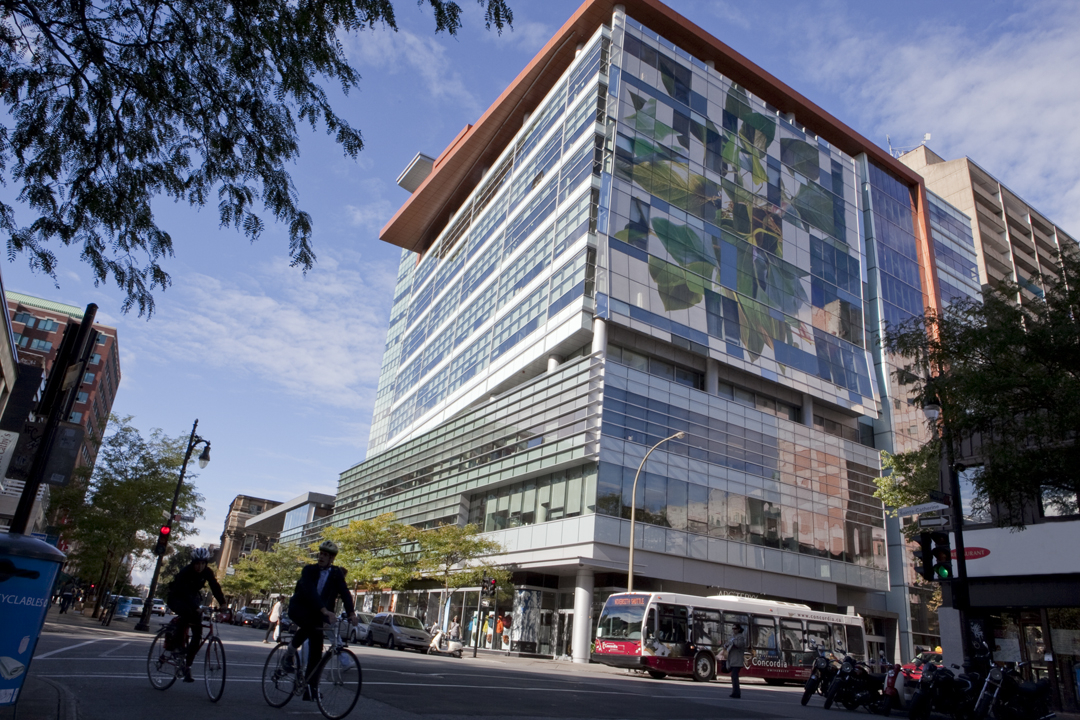 The Canadian public has been shocked and scandalized in recent weeks, following a slew of allegations of sexual misconduct within Concordia University’s creative writing department, and the subsequent suspension of two professors.

An investigation into those claims is currently underway by an independent party, while a parallel discussion takes place about whether sexual relations between professors and students should be allowed at all.

I couldn't resist weighing in.

The issue of consensual, yet highly questionable student-teacher relationships is a complicated one that lends itself to no easy answers. No major Canadian university currently explicitly forbids teacher-student relations — and based on their reticence to change anything, most appear to believe that their codes of conduct and sexual-assault policies in place provide enough protection for their students.

But in light of revelations that a number of reported cases of sexual harassment at Canadian universities have been mishandled, or even silenced by university administrations, some are starting to question that.

This past year — even before the Steven Galloway scandal broke — the University of British Columbia (UBC) started assessing whether professors should be barred from having romantic relationships with their students, as part of developing their new sexual-assault policy. Author Steven Galloway was fired last year from UBC, which cited "a record of misconduct that resulted in an irreparable breach of the trust placed in faculty members."

Many argue that since undergraduate and graduate students are of legal age and therefore consenting adults, and relationships sometimes do develop (particularly in an environment where you find yourself in admiration of someone’s body of work), what would be the point in banning them since rules are already in place for sexual harassment?

The fact remains, however, that there is a major power imbalance between a professor and a student — one that can easily be exploited by someone with predatory inclinations. When one considers issues of consent and conflict of interest, it’s not unreasonable that some major U.S. academic institutions like Harvard, Yale and Connecticut have already written policies banning such sexual relationships.

Faculty have the power not only to grade and evaluate students’ work, but also write referral letters, sit on editorial boards of academic journals, and act as mentors and counsellors. Judging by many of the recent testimonials of former students, this not only prevents many victims from coming forward, but also raises the question of whether it prevents students from being in a position to truly consent to any type of relationship at all.

Well-known novelist and Concordia creative writing department alumnus Heather O’Neill finds these relationships unacceptable and firmly believes universities should make them illegal. “There is no consent in a power relationship like that,” she recently said in an interview. “There is no penalty for it, the university looks the other way and it’s almost seen as some sort of twisted perk of the job. It needs to stop.”

Why no code of ethics for professors?

Martine Delvaux, a writer and a professor of literature at Université du Québec à Montréal (UQAM), who wrote Sexe, amour et pouvoir : il était une fois à l'université (Sex, love, and power: once upon a time in university), also objects to these relationships:

This past year, the Quebec Students Union, which represents 72,000 university students across the province, recommended that professor-student relationships be banned as part of overall consultations on sexual violence. In 2015, after Harvard enacted their ban, 80 professors and students signed a letter that was published in French-language daily Le Devoir, requesting exactly that.

But the demand has been met with skepticism from the Quebec Federation of University Professors, who argue that, while they understand the inevitable complications and risks, such a ban would be extremely difficult to enforce.

The National Teachers Federation, (La Fédération des enseignantes et enseignants du Québec (FNEEQ), however, which is comprised of 46 unions representing 85 per cent of Cegep teachers, feels differently. It adopted a strict position two years ago regarding teacher-student relations and considers them highly unethical and inappropriate.

"Obviously, the fact that 'we are all adults in universities' is not satisfactory… to the victims anyway," says Sylvain Marois, Vice President of the Federation's University group.

This past December, Quebec passed Bill 151, An act to prevent and fight sexual violence in higher education institutions. The law, which must be adopted by Sept. 1, 2019, has a provision requiring that post-secondary institutions adopt policies governing intimate relationships between students and university personnel, including professors and lecturers, but doesn’t explicitly state that they should be banned.

While some people argue that real, long-lasting relationships can occur even under such circumstances, Delvaux believes they are the exception, not the rule: "The rule is a female student having her career and life devastated by a relationship with a professor that turned sour or ended.”

She’s particularly leery of the creative arts world. “The literary world is especially dangerous, as Concordia has just shown,” she said. “A creative writing professor will also be a published writer, editor, critic, sit on committees inside and outside of academia, etc. They exert a tentacular power.”

Recent, disturbing testimonials from former students — including this Twitter thread by film writer and former Concordia creative writing program alumnus Celeste Parr, this anonymous article in The McGill Daily and this blog post by writer Julie McIsaac — all paint vivid and troubling pictures of repeated, habitual predation and toxic masculinity, along with the nefarious effects of these professors’ far-reaching powers. In most cases, they also reveal universities’ reluctance to deal with any of the accusations head on. Reading them should, at the very least, make us question the dynamics in these relationships and what needs to be done to discourage them from happening.

Right now, with nothing explicitly forbidding professors from dating students, academic institutions would do well to address the weaknesses in their own conduct codes that basically enables, and possibly facilitates this behaviour, and places the onus of proof on the students to explain why they feel wronged or taken advantage of — ultimately protecting the professor in the long run. With a change in the conduct code, the onus would automatically fall on the professors and not on the more vulnerable party.

And, if an outright ban is neither desired nor deemed effectual, universities should ensure that better mechanisms are in place so that students aren’t penalized professionally for dating a professor or, in sharp contrast, rebuffing a professor’s advances. Sexual harassment training for faculty members should be mandatory, and a professor in a relationship with a student should be obligated to report it to the administration and ensure they are not responsible for grading or teaching that student.

In cases of documented abuse however, meaningful sanctions should be imposed. The sole focus shouldn't be on protecting the institution's reputation, which creates the impression that faculty members are always protected and these relationships condoned.

While sexual harassment and notions of professional conduct are technically covered via university policies, there are many related issues that aren’t addressed by them. These relationships can, for example, toxic for other students. Imagine taking a class where you know your fellow student is sleeping with the professor — the appearance of unprofessional conduct alone, or possible distorted judgement or favouritism undermines the institution and the profession.

“It was one of the points I tried to make in 2009,” Mark Bourrie told me. The former Concordia teacher and current law student contacted the journalism department at the time to inform them of what he referred to in his emails as “sexual improprieties,” and how they were affecting other students.

“It's not just an issue of the classroom and grades. Professors have a lot of power over things like internships, references scholarships, conferences, research and teaching assistantships, etc.,” he said. Bourrie said he feels that the university failed to act on his concerns.

‘Adults are adults’ is just an excuse

With regard to the Concordia creative writing department alumni and specific testimonials that have recently surfaced, an additional question lingers: how does one deal with the possibility of reprisals in small literary presses when career-defining decisions often involve the very same people you may have rejected as a student?

The Canada Council for the Arts recently issued a statement on sexual harassment and sexual misconduct in the cultural sector, saying it would be “reviewing their granting policies” to ensure they better addressed situations involving “artists organizations receiving Canada Council funding.”

Patti Sonntag, who once worked for small presses in Montreal and Vancouver, said something is still missing.

“What’s missing is an arbitration system connected to the arts council grants that people can go to if a publisher or similar employer tries to set up a quid pro quo relationship in exchange for work or publication,” Sonntag, who is now a managing editor at The New York Times’ News Services division, told National Observer.

“In the broader picture, this could benefit women and men across the community — as long as the system protects those who step forward from reprisals.

Because of the UBC and Concordia allegations, poet, novelist and Concordia alumnus Zoe Whittal, who once approved professor-student relationships, has since changed her mind:

“I’ve realized that the 'adults are adults' phrase that I clung to somewhat thoughtlessly, gets used to excuse all kinds of patterns of behaviour, and allows colleagues and the administration to turn a blind eye to pathological abuses of power," she says.

"Plus, how long is a semester — three months? An MFA degree is two years? If you're that attracted to someone, it's not a big deal to wait until you don't have power over someone to date them. And if you only want to date someone when they're a student, or if you're 53 and they're 19, you're attracted to having power over them.”

Editor's note: This article was updated at 12:15 p.m. ET on Jan. 22 to correctly identify that Mark Bourrie was a teacher when he approached Concordia University with his concerns and not a graduate student. It was also updated with new comments from the National Teachers Federation.

"And if you only want to date

"And if you only want to date someone when they're a student, or if you're 53 and they're 19, you're attracted to having power over them.”
Not to mention clueless about age-apropriate dating and the cliche stereotype of midlife crisis. Staff are there to work and students are there to learn. Professionalism is part of the job and the very generous pay package. Preying on students is not a perk of the job and there are no circumstances where it's acceptable to have any sexual or romantic contact with a student. Instead of Adults are adults, it should be All Students are Students. Even if the students are adults, the imbalance makes it bad news and it's why many companies have strict rules against it. I had believed all schools already did ban these relationships, at least in Canada and I am sickened that they are set up for exploitation. It isn't enough to have scandal-driven changes here and there, while the festering boil of patrimony keeps growing. Women in Iceland went on strike for one day in 1975 - no job, no housework or looking after kids - the country was in chaos and eyes were opened. Their first equality laws were passed soon after, 5 years later a woman was running the country and they lead the world on equality and the positive changes to society that brings. Bring on the strike in Canada!