Sparrows in the oilpatch are changing their love songs 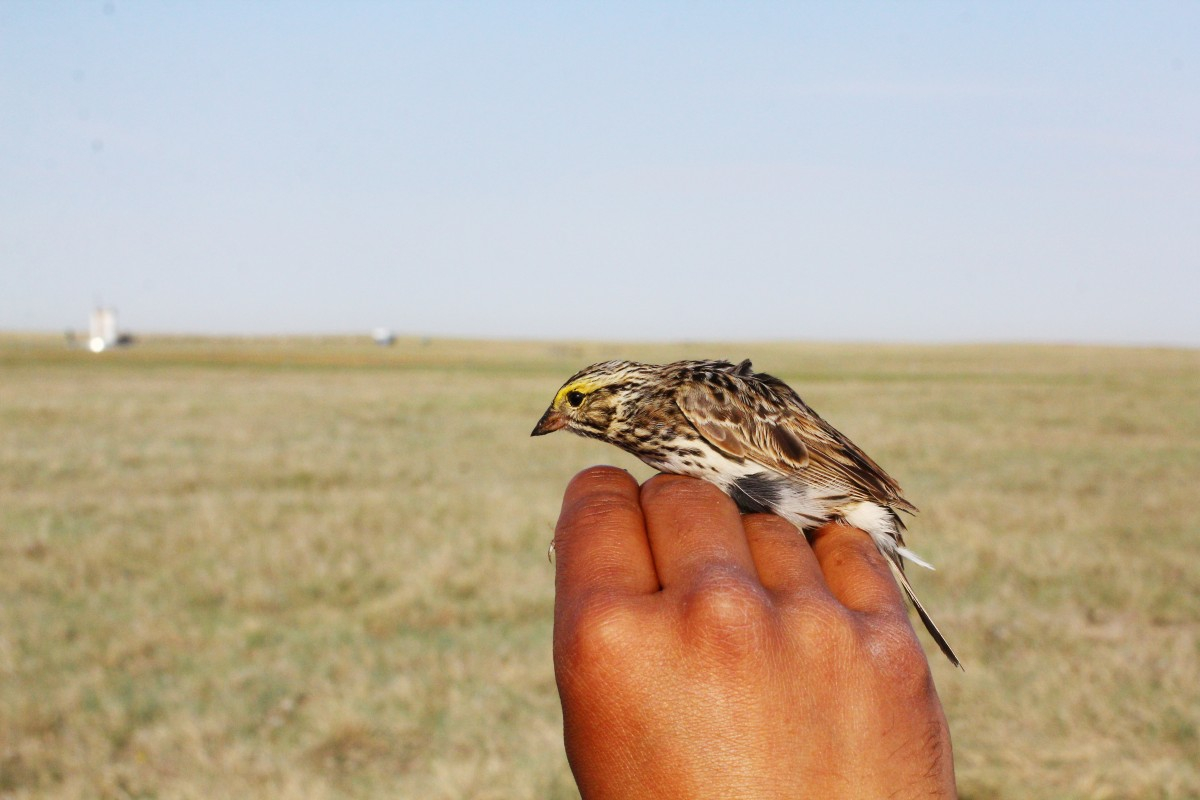 A Savannah sparrow takes a quick break on an outstretched hand in Brooks, Alta. in May 2015. Photo by Clair Curry
Previous story
Next story

Some birds have been forced to change their tune as a result of noise pollution from oil and gas drilling, new research from the University of Manitoba has found.

The study, published in this month's edition of The Condor: Ornithological Applications, suggests that the din of industrial activity drowns out important parts of their songs, which may include such vital details as a bird's 'name' or how fit it is for mating.

Researchers studied the effects of oil and gas infrastructure, including compressor stations, pump jacks, and oil well screw pumps on the melodic musings of Savannah sparrows, and compared them with the tunes produced on quiet control sites. They examined 76 birds over a two-year period in Alberta, and recorded them at the height of the singing season — six weeks between May and June.

Sparrows living in and around the oilpatch had modified their frequencies, syllables and tones near generator-powered screw pump sites — the loudest form of infrastructure examined, said report co-author Nicola Koper, a terrestrial ecologist at the university's Natural Resources Institute.

"We looked at the individual syllables to find out what it was they were actually changing," she told National Observer in a Wednesday interview. "That was neat, because depending on what type of information they were trying to communicate, the adjustment to their song was different."

This Savannah sparrow in Alberta has altered its tune, heard here, in order to adjust to din from oilpatch infrastructure in its surroundings. Audio courtesy of the University of Manitoba

Males adjust while looking for mates

The study could have important conservation implications, she explained. It sheds light on the ways human activities may impact the birds' ability to reproduce and communicate danger effectively. While the Savannah sparrow is not considered endangered in Canada, its numbers are on the decline, she added.

The beginning of the sparrow's song, Koper explained, is a call for the other birds to listen, while the notes that follow identify its species. Towards the end of the song, the Savannah sparrow typically describes how "sexy" it is, she said, compelling a mate to come forward.

Each ditty contains a mix of clicks, high clusters and trills designed to indicate a male's attractiveness. In order to ensure they find a suitable partner, Koper suggests installing mufflers or sound-proof walls around certain oil and gas facilities. Connecting wells to the power grid, she added, would also save companies from having to use noisy generators that interfere with songs like that of the Savannah sparrow.

The sparrow was a natural fit for the study, Koper explained, since it appears across all kinds of terrain in Canada — from untouched grasslands to residential areas — and seems to have adapted well. Understanding how the sparrow adapts, Koper said, could help researchers understand why other species of birds are struggling.

Koper and her team are currently working on a second study that will determine how effective the sparrows' musical modifications are, by recording the behaviour of the birds who hear them.

Similar research has been done for marine mammals that rely on echolocation or underwater songs to hunt, communicate and mate — including the endangered Southern resident killer whale. Such findings could have implications for pipeline projects leading to tidewater, and the associated increase noise from ocean tankers carrying their product to market.

I didn't find the audio