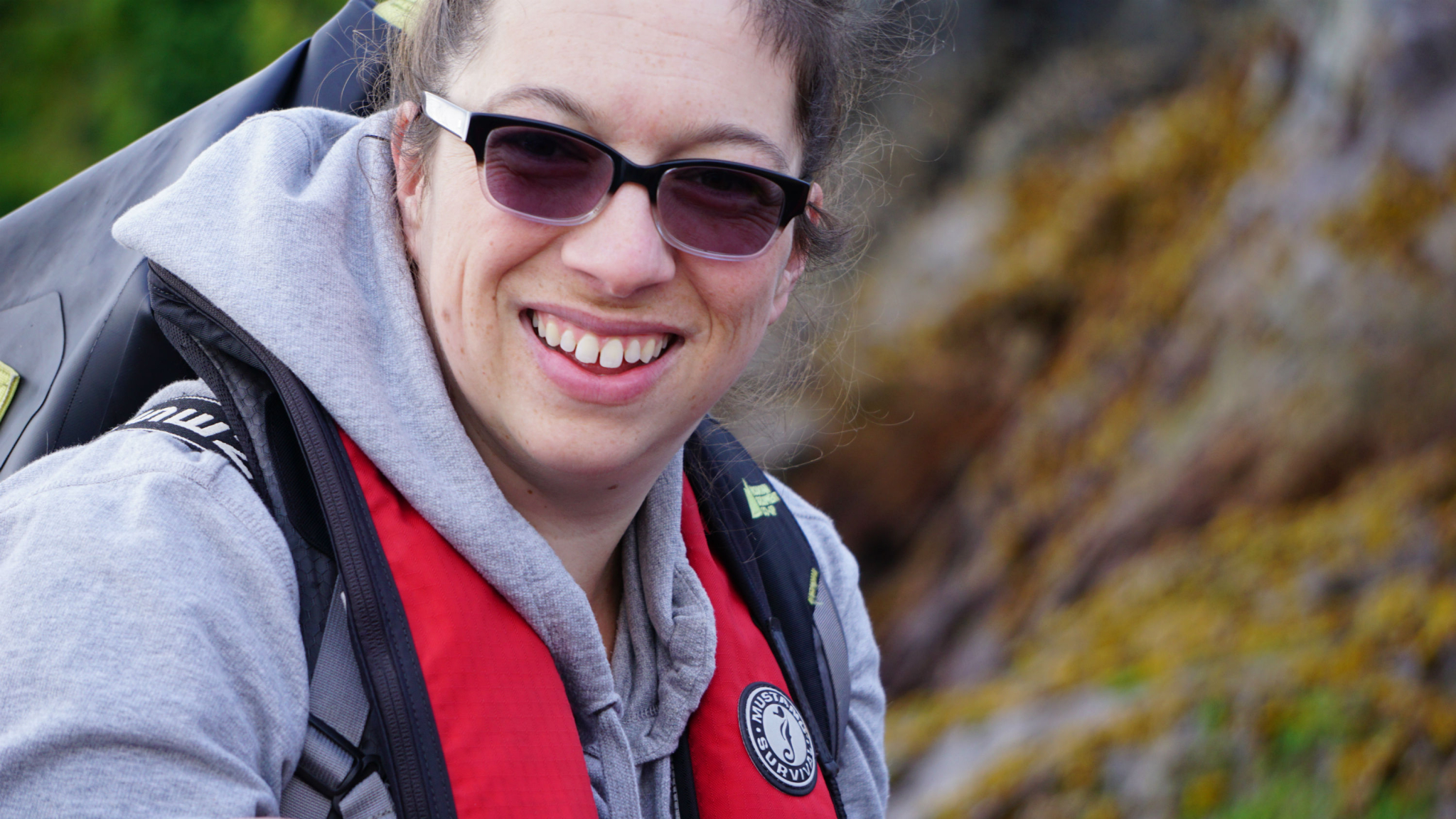 Anyone who has visited remarkable ecosystem would probably know about the grizzlies, orcas, wolves, and Spirit Bears — majestic predators that over the last two decades, have become the region’s claim to fame.

Caroline Fox, a coastal ecologist and conservation scientist from Vancouver Island, knows these creatures very well; she talks about them for hours on end with tourists in the Great Bear Rainforest, who (understandably), tend to be more interested in Spirit Bears than seaweed.

But I can tell you Fox talks about bull kelp and other ugly sea plants with the same amount of passion she has when she talks about a pod of orcas. I found it to be quite enchanting, and within minutes, she had me — a journalist — convinced that the life cycle of bull kelp could change the world.

The Great Bear Rainforest is truly the most infinite, wild, and beautiful place I have ever been. The entire ecosystem stretches 64,000 square kilometres from the northern tip of Vancouver Island to Alaska, and for many, the splendour of its misty fjords, moss-covered mountains, and old-growth forests is beyond the reach of imagination.

I recently had the good fortune of spending a week sailing through its glassy waters with Fox, a Postdoctoral Fellow with the Raincoast Conservation Foundation and the ACS Lab at the University of Victoria. The articulate scientist — equally talented at storytelling as she is at conducting research — has spent months documenting the rainforest's inhabitants with little more than binoculars and a notebook.

It was, at the time however, the largest systematic survey in the province for coastal birds and mammals. Fox developed a deep understanding of the Great Bear Rainforest's biodiversity, and in my estimation, no creature seems too big or small to warrant her attention.

“I work on a lot of megafauna like birds and mammals because they’re often at elevated risk of extinction because of their importance to conservation,” she told me. “But when I study marine species like marine mammals and birds, it’s very clear that it’s the little things that make those ecosystems run.”

The first two, I learned, describe the symbiotic relationship between all species in the rainforest, particularly salmon, whose living bodies feed predators,. When they die, their carcasses enrich the soil and plant life that sustains the entire ecosystem. But the last term, Fox told me — anthropogenic change — describes something far darker: human impacts to the rainforest’s vitality.

In this case, she said, climate change, tankers, and pipelines.

Over the last few years, Fox has been consulted many times on biodiversity and richness of rainforest life. She served as an expert on marine birds and fish during National Energy Board hearings for the Enbridge Northern Gateway pipeline and the Kinder Morgan Trans Mountain expansion, both of which threaten to send tankers full of diluted bitumen up and down the B.C. coast.

The Great Bear Rainforest and its inhabitants are “remarkably sensitive” to the impacts of human activity, she told me, particularly oil spills.

“Often when there are, in particular, catastrophic oil spills, images of oiled wildlife — often birds — are broadcast around the world,” Fox explained. “You have these dramatic acute mortalities in the weeks following the oil spill, then you have this chronic level condition that stretches from years to decades.”

I tried to imagine a dark brown oil slick floating on the surface of the Great Bear Rainforest's pristine waters, where I witnessed firsthand the hustle and bustle of marine life, including two fin whales, three orcas, four porpoises, and at least a dozen humpbacks.

Oil doesn’t simply disappear, Fox added. It remains in the ecosystem’s sediments and filter feeders, and makes its way into the food chain. In addition to exposing marine life to tough-to-clean oil spills, she said the vessels themselves would also create disruptive underwater noise and wakes that impact whales, fish, and other underwater critters.

The Trans Mountain expansion is currently under federal review, and a Federal Court of Appeal last week overturned a First Nations court case that could have stopped it, or at least, slowed it down. While Enbridge Northern Gateway’s approval, issued under the Harper government, has been struck down for now, a major LNG project in B.C. could result in a liquified natural gas terminal being built on Lelu Island, in the heart of the Great Bear Sea.

These projects add fuel to the fire that permanently threatens the rainforest and its keystone species: temperature increase from climate change caused by oil sands expansion.

“We are already seeing what scientists believe to be the effects of climate change on the British Columbia coast,” Fox said, her voice taking an uncharacteristically serious tone.

Dramatically decreased salmon stocks could be one of the first casualties, according to scientists, who are already seeing Pacific populations dwindle as a result of “very different and unusual conditions in the ocean.”

Part of Fox's research today, she told me, focuses on collecting data that would help solidify the case for increased marine protection in the Great Bear Rainforest by identifying “critical habitat” for vulnerable species, like whales. 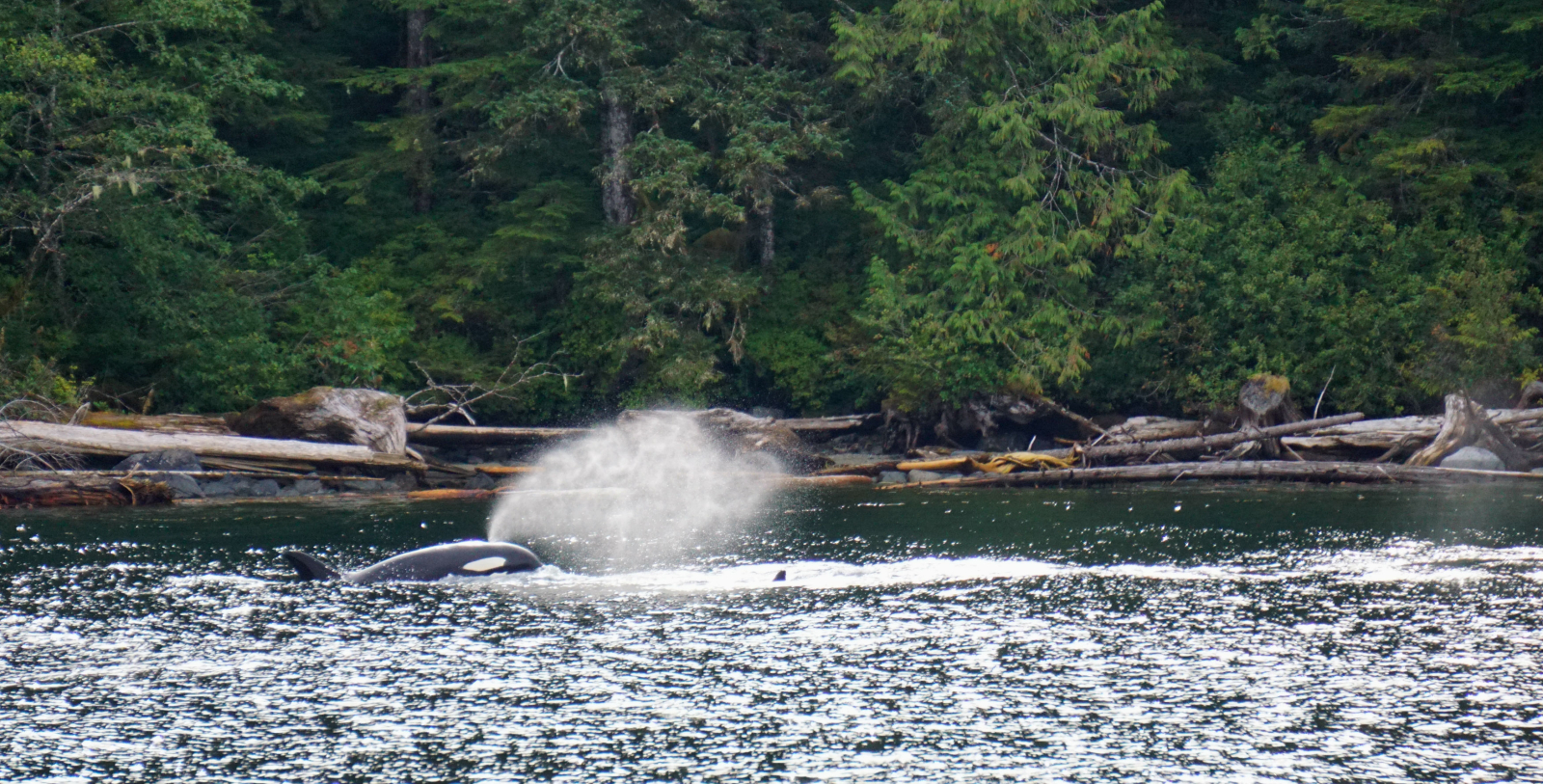 Killer whales, like those pictured here surfacing for air in the Great Bear Rainforest, are among the marine species that would be most severely impacted by increased tanker traffic from pipelines. Photo by Elizabeth McSheffrey, Sun. Sept. 4, 2016.

While 85 per cent of the Great Bear Rainforest’s land mass is safe from commercial logging due to newly-legislated conservation agreements, its marine protection for its waters is a work in progress. New research from the Raincoast Conservation Foundation, however, could lend a hand to scientists making the case for legislation conserving the Great Bear Sea.

The Whales, Habitat and Listening Experiment (WHaLE), which Fox is a part of, uses underwater drones equipped with acoustic monitoring to detect whales in the Atlantic Ocean characterize their relationship with their habitat. The research may be conducted from the East Coast, said Fox, but it could have important implications for West Coast ecosystems like the Great Bear Rainforest.

“We’re looking for habitat that is important to these whales and trying to figure out why that habitat is important, and what characteristics of the ocean are important,” she told me.

“Gliders and vessels tell us basic information on where these animals are, how many are there, and once you’ve figure that out you can figure out the why that habitat is important, and undertake steps to identify critical habitat and protect it.”

My reading of her statement is, essentially, it’s hard to make a case for protecting Great Bear Rainforest waters, if no one has a sound understanding of what lives in them, in what numbers, during what times of the year, and how their relationship with the ocean could be impacted by human activity.

In 2016, Canada reaffirmed its commitment to the Convention on Biological Diversity’s Aichi Biodiversity Targets, requiring it to protect 10 per cent of its coastal waters by 2020. The Aichi Targets were adopted at the convention 2010, and contain 20 goals for 2020 that halt the loss of biodiversity and promote healthy and resilient ecosystems.

The Great Bear Rainforest could play a part in reaching this goal, said Fox, who in addition to facilitating critical research on whales and the ocean, has recently published a book on the ecosystem’s marine birds. She has been fascinated with the region since she was a child growing up on Vancouver Island and lives on a property that overlooks a salmon spawning stream.

“It was always portrayed as this area of incredible rarity and wildness, as a last remaining intact tract of coastal temperate rainforest,” she told me. “I think no one can deny that witnessing something like that is intensely personal. But what is often just as emotionally impactful is seeing the decline of that relationship.”

Fox's new book, At Sea with the Marine Birds of the Raincoast, retails online for $25. If purchased through the Raincoast Conservation Foundation's website, a portion of the proceeds will be donated to the organization's marine conservation work.