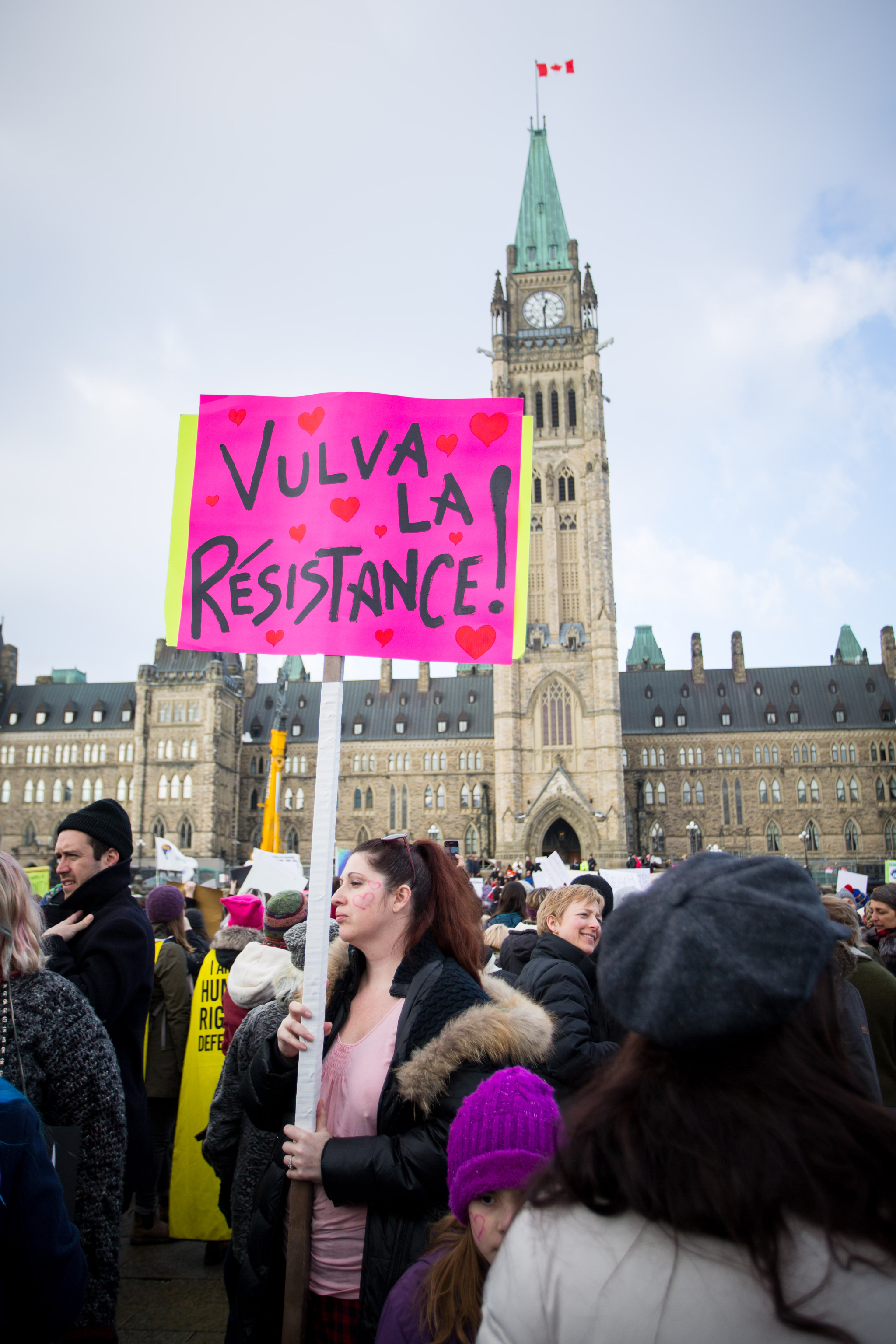 Women and allies descend upon Parliament Hill during the annual Women's March on Sat. Jan. 20, 2018. Photo by Alex Tétreault
Previous story
Next story

The tweets started circulating barely six hours after I watched the live and long-overdue sentencing of Larry Nassar, the former U.S. gymnastics doctor accused by more than 160 women of sexual abuse over two entire decades.

Within hours, a visibly-shaken Brown had invited reporters to a news conference where he denied the allegations and vowed to fight them “with everything he has.” He refused to resign or answer any questions, saying he’d be “back at work tomorrow.”

The press quickly learned from a joint statement that all three members of his senior staff had resigned in advance of his presser in reaction to the allegations.

Mere hours later, Brown resigned while still denying the allegations, dating back to his time as a federal MP, as “categorically untrue.” Citing his allegiance to the party and alluding to the fact that these allegations would make it hard for them to beat Ontario Premier Kathleen Wynne in the upcoming election, he opted to step down.

Overnight, allegations of harassment surfaced against federal Minister of Sport and Persons with Disabilities Kent Hehr. He did not deny these allegations, but on Thursday, resigned from his ministerial duties while an investigation is ongoing. He will continue to serve as MP.

What are the odds of back-to-back stories of sexual harassment in Canada dominating a 24-hour news cycle?

An onslaught of cases within two days

Within hours of Brown’s resignation in the wee hours Thursday, a disturbing new story of alleged abuse of power and trust broke in Quebec. Provincial police are investigating former Quebec gymnastics coach Michel Arsenault for sexual assault allegations. Radio-Canada Sports reported that he is named in complaints to police from several women in the past few days.

The seven complainants were between 10 and 20 at the time of the alleged incidents. Police said suspected more victims might come forward during the investigation.

In case it slipped our collective consciousness, it was only a month ago that a Quebec court sentenced former national ski coach Bertrand Charest to 12 years for 37 charges of sexual assault, dating back to the 1990s. The victims were all competitive skiers between the ages of 12 and 19 at the time of the attacks, and testified that Charest was a ruthless predator who destroyed them and their love for their sport.

The Brown allegations and Arsenault sentencing are just the high-profile ones in the spotlight in over a 24-hour period. At the same time, news also broke that Coach House poetry board member Jeremy Dodds has been accused of sexual impropriety, prompting the prestigious publishing house to temporarily place its poetry program on hiatus.

Since this involves a relatively small group of people at an independent publishing press and poetry program, few people may read about this case. But it’s just one more accusation in a string of accusations rocking Canadian Literature after the Concordia University cases.

While the onslaught of new accusations is coming fast and furiously, the predictable backlash against #MeToo continues: it’s too angry, too vengeful, too confused, too far-reaching, too questionable, too arbitrary, too ready to play “judge, jury and executioner,” — too much of everything.

Everything else is subject to consideration and suspicion. After all, not everything can be sexual abuse, right?

But what if it is? What if case after case after case is revealing the ugly truth festering under the thin veneer of civility and justice for all? What if the bad ones aren’t the exception; what if there are more of them than we thought? After all, how many legitimate accusations can we dismiss as frivolous, before we start to realize that they comprise the norm? A norm we should have never convinced ourselves was normal.

The clues that we, as a society, require a proper dismantling and reprogramming in the ways that we treat sexual abuse allegations and the victims who come forward, is hiding in plain sight in the public discourse currently unfolding.

There are questions we should be asking

Many have questioned Judge Aquilina’s “harsh” tone during Nassar's sentencing, and how it communicated bias. In fact, given that Nassar had already pled guilty months ago, the judge had absolutely no obligation to to be impartial. She chose, instead, to stand as champion and defender of these young women.

In sharp contrast, what strikes me as deeply unfortunate is why more people aren't questioning how a grown man placed in a position of power and trust decided to abuse children, and how U.S.A. Gymnastics and Michigan State allowed it to go on for so long? Those questions should have been asked long ago.

Given the June election in Ontario, some are questioning the timing of the accusations against Brown. His party appeared to have a good chance at unseating incumbent Wynne, prompting some critics to suspect a conspiracy or smear job in advance of the vote.

Twitter is awash with partisan hot takes about what the allegations will mean for the Ontario Conservatives down the road. Politics is a blood sport and so the news will be greeted accordingly by friends and foes and pundits. But why aren’t they questioning how the victims are, how it affected their careers, their outlook on life, their self-esteem, and their ability to trust?

Time to start a spreadsheet?

Some are questioning the severity of the “sexual misconduct” allegations at work, the legitimacy or fairness of the accused being condemned in the “court of public opinion,” instead of the court of law. They seem to forget or are unaware that, because of defamation laws, accusers and media outlets won’t print someone’s name unless they have irrefutable proof and several people corroborating the story.

And besides, why aren’t they questioning why so many victims are consistently choosing to go to the media with these allegations, because their faith in the judicial system has been so compromised?

The stories of men in positions of power and trust, accused of abusing those younger and more vulnerable, are multiplying with such speed, one feels the need to start employing an Excel sheet to keep better tabs.

Survivors are everywhere and they've now gained a voice. The doubting Thomases are everywhere, too. What they say and how they dismiss, derail and deny matters.

You can look at the ever-growing list of accused and choose to see a movement that’s “gone too far” or you can finally acknowledge that we have a serious problem that we need to fix.

American actor Terry Crews, who has also come forward as a victim recently, said “the #MeToo movement isn’t a witch hunt; it’s a fumigation.” I tend to agree. The movement is exactly where it needs to be and doing exactly what it’s supposed to be doing: cleaning house, making the bad guys run.

If it feels to some that the movement has “gone too far,” it’s only because it was so damn quiet before. It's only because the extent and scope of the victims' claims is so extensive and all-encompassing. As of now, is there a single field, department, sector, or one single area that has been unaffected by #MeToo? Extremely doubtful.

Day after day, allegation after allegation, conviction after conviction, I continue to be in awe of the people brave enough to come forward with their personal and painful stories. I continue to be grateful for their truth. I believe that something better will come out of this for all of us. Except for abusers, of course.

Time’s Up for them.