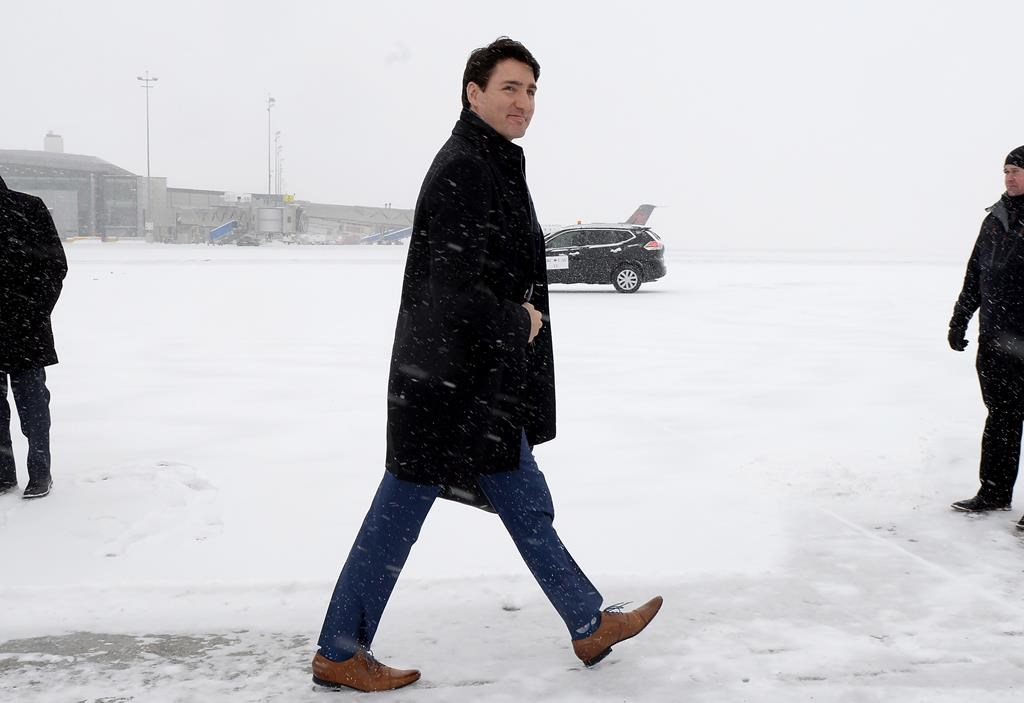 Prime Minister Justin Trudeau walks across the tarmac to board the government airplane on his way to Chicago, in Ottawa on Wed. Feb. 7, 2018. Photo by The Canadian Press/Ryan Remiorz
Previous story

Prime Minister Justin Trudeau put Justice Department lawyers on notice Wednesday for their response to a proposed class-action lawsuit on military sexual misconduct, saying their arguments are out of line.

The lawsuit was brought forward last year by three former service members who say they were harassed or assaulted while in uniform. They are seeking $800 million for themselves and others in similar situations.

Justice Department lawyers filed documents in late December in which they asked the Federal Court to quash the suit, which comes as military leaders are pushing for a culture change to eliminate all forms of sexual misconduct in uniform.

The documents include a number of arguments for why the lawsuit has no reasonable chance of success and should therefore be dismissed before going to trial.

Officials for Justice Minister Jody Wilson-Raybould and Defence Minister Harjit Sajjan refused last month to comment on the federal lawyers' response because the case was before the courts.

However, after Trudeau's intervention Wednesday, Wilson-Raybould raised the idea of taking a less adversarial approach and reaching an out-of-court settlement.

Earlier in the day, Trudeau said the lawyers' arguments were "of concern to me, and I've asked (Wilson-Raybould) to follow up with the lawyers to make sure that we argue things that are consistent with this government's philosophy.

"Obviously the lawyers' argument does not align with my beliefs or what this government believes."

Trudeau did not say exactly which arguments were of concern, and his office refused to provide further information.

But lawyer Rajinder Sahota, who is representing the three former service members involved in the lawsuit along with lawyers from five other legal firms, cited one statement as being of primary concern.

It says the government does not "owe a private law duty of care to individual members within the CAF to provide a safe and harassment-free work environment, or to create policies to prevent sexual harassment or sexual assault."

That doesn't mean the government is arguing it has absolutely no obligation to create a safe workplace or prevent sexual misconduct, said University of Ottawa law professor Bruce Feldthusen.

"'We don't have an obligation to compensate individual victims.'"

Feldthusen said it makes sense for federal lawyers to make such an argument as part of their attempt to get the lawsuit tossed out of court, but he didn't believe it had much chance of success.

The lawsuit was front and centre during a heated question period Wednesday in the House of Commons, where concerns about sexual misconduct and the #MeToo movement have dominated debate for weeks.

With Trudeau having left on tour of the U.S., it fell to Defence Minister Harjit Sajjan to respond to Conservative allegations that the government was arguing it did not have a duty to provide a safe workplace for women in uniform.

"We are committed to making sure that we have a harassment-free workplace within the Canadian Armed Forces," Sajjan said at one point while noting that dozens of service members had been kicked out for sexual misconduct.

"We are going to stomp this matter out."

But Sajjan did not respond when NDP House leader Ruth Ellen Brosseau demanded the government end the "irresponsible and reprehensible" efforts to quash the lawsuit, which she said flew in the face of Trudeau's promise to support victims of sexual abuse.

"We want to be able to work with the opposition on this issue because this is an important issue that impacts all of us," Sajjan said.

However, Wilson-Raybould said outside the Commons that while she was waiting for feedback from the government's lawyers, "I will look for opportunities where we can ensure where matters are in the public interest that we proceed on a less adversarial basis and look to settle."

By The Canadian Press in News, Politics | February 1st 2016