Gerald Stanley and the fear of the 'Indian' 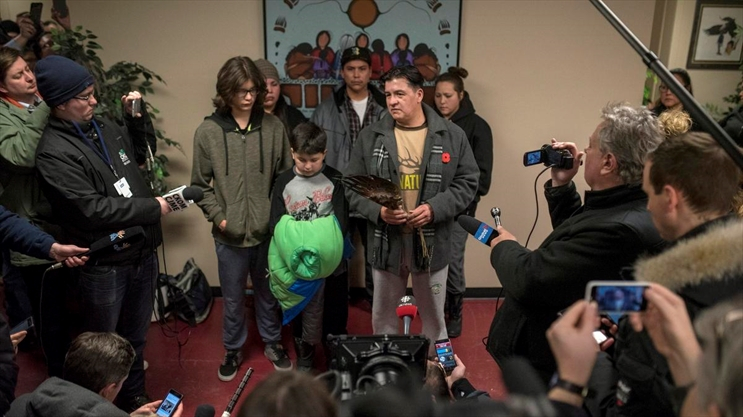 There is a video from the courthouse in Battleford, Saskatchewan on Feb. 9, 2018. It shows a screen which is split in four and displaying the courtroom, the jury box, the judge, and the accused in the Gerald Stanley case.

As the verdict is announced, there are gasps, and shouts; Colten Boushie’s mother cries out. Court officers grab Gerald Stanley and run out of the frame, and to a waiting truck under heavy RCMP protection.

In the jury box, a dark-haired woman in a short dress, and long hooded sweater jumps up as Stanley passes, and runs off camera herself — getting away from the family and the assembled Indians in the courtroom.

I would like to think that she ran because she was ashamed of what she had just done. But the likelier answer is that she ran for the same reason that she and her fellow members of the all-white jury found Gerald Stanley not guilty for killing 22-year-old Colten Boushie. They were afraid of Indians, especially angry Indians.

And let’s dispense, for a moment, with those words “First Nations” and “Indigenous,” because those imply respect, and progress. Today it is clear that we’re still “Indians.”

“Fights with Native kids were a too-common part of [my friend’s childhood] experience … It’s no overstatement to point out that such kids were, on average, rougher than the white kids, or that they were touchier…”

That is a quote from the best-selling non-fiction book in Canada this week, Jordan Peterson’s 12 Rules for Life. Natives are rougher, touchier. The Indians are restless — run.

Some people in this country are worried about schools engaging in social engineering to manipulate children into holding certain political views. They’re right to be worried. It is school that taught that woman when to run; it was newspapers, TV, films, it was books.

"To find Gerald Stanley guilty, would be to find him responsible for his actions — actions which resulted in the death of Colten Boushie, an Indian. But we don’t do that in this country. White Canada is not responsible..." via @NatObserver

A few months ago, Postmedia, in an article on renaming a village, gave a writer space to present Indians as lacking any comprehensible motives beyond animal desire: “Indigenous allies generally lined up with whichever European power offered the best deal, which usually included guns and brandy or rum. To some extent, Indigenous people were mercenaries and were allies as long as there were rewards.”

Even today of all days, Maclean’s ran an article from Scott Gilmore in which he wrote about farmers’ fear of the “chaos of the nearby reserves” — as if they were a turned-over bees’ nest.

It was every comment and joke that taught that woman to run, it was the Premier of her province urging “calm” after the verdict. It was what her boss told her at her part-time job — “Watch that Indian over there, I think he’s stealing.” She was taught to run, and to think that Indians, especially young male Indians, are scary — subconsciously it sunk in, that they’re wild and dangerous animals.

If a fox is stealing chickens, it’s not enough to chase it away; you need to put it down. And Gerald Stanley put Colten Boushie down at point-blank range, and because these jurors were raised to see us as scary animals, to think of us as wild “wagon burners” — a slur you hear on the Prairies — it was easy for them to see why he was justified. “It could have been me and my family,” they undoubtedly thought — and who wouldn’t do anything to protect their families?

Gerald Stanley had a family, and one that looked like theirs — them in the all-white jury. Colten Boushie didn’t have a family. Indians don’t have “families.” They have braves and squaws, chiefs and papooses, bitches and thugs — but not a mother and father like the Stanleys are.

When you hear the mother of a deceased child wail in agony for the verdict you’ve brought down, you hang your head, and quietly and respectfully leave. On the other hand, when you get between a wild animal and its mother, you run. That woman in the jury reacted like Colten Boushie’s mother was a charging bear, not a grieving mother.

Don’t say that this is about Saskatchewan, or the defence, or those racists over there. And don’t say that Canada failed Indigenous people — Canada just failed. It wasn’t a mob of racists that released a killer onto the streets — it was 12 regular Canadians.

These are Canadians who have lived their entire lives hearing excuses for why they don’t need to care about Indians. Why care about tainted drinking water on reserves? “Those greedy chiefs are probably taking the money, those Indians need to sort themselves out first.” Why care about the crisis in Thunder Bay? “It’s Indians killing Indians, Indians drinking too much and falling in the water, what are we supposed to do?” For every problem that Indians face in this country, there is a ready excuse, a fig leaf, to shield Canada from blame.

If you don’t know how it is that so many reserves live in poverty, or why the prisons are full of our people, or why there are so many suicides, boil-water advisories, why there are so many Missing and Murdered Indigenous Women, why any of the dysfunction and failure and tragedy that is the “Indian Problem” in this country exists, look for your answer in the Gerald Stanley verdict.

To find Gerald Stanley guilty, would be to find him responsible for his actions — actions which resulted in the death of Colten Boushie, an Indian. But we don’t do that in this country. White Canada is not responsible for what has happened to Indians.

The school that teaches you to run, teaches you that you’re the good guys in this story, and that everything that has befallen our Indian race was inevitable, it came on us like a force of nature. Who can blame you for a flood or an ice storm? Who can blame you for tainted water, or blame Gerald Stanley for just doing what any of you would do in the same situation? The jury decided that blame, as always, belonged to the Indian, for trespassing on this farm and putting himself in harm’s way. The best of you will shake your head and pity him, the poor animal, for not knowing better — but what can you do?

I feared that the jury would come down with a manslaughter conviction — instead of the murder conviction that was due. No part of me thought they would let him go and believe this story. I honestly thought it was hyperbole to think that Stanley could get away with it, because as bad as some people say it is, people claim to have good intentions, and things are better, aren’t they?

But they’re not. That’s what the verdict shows. That’s why she’s running.

Editor's note: This article was originally published by MEDIA INDIGENA.