How do Canadians feel about the justice system? 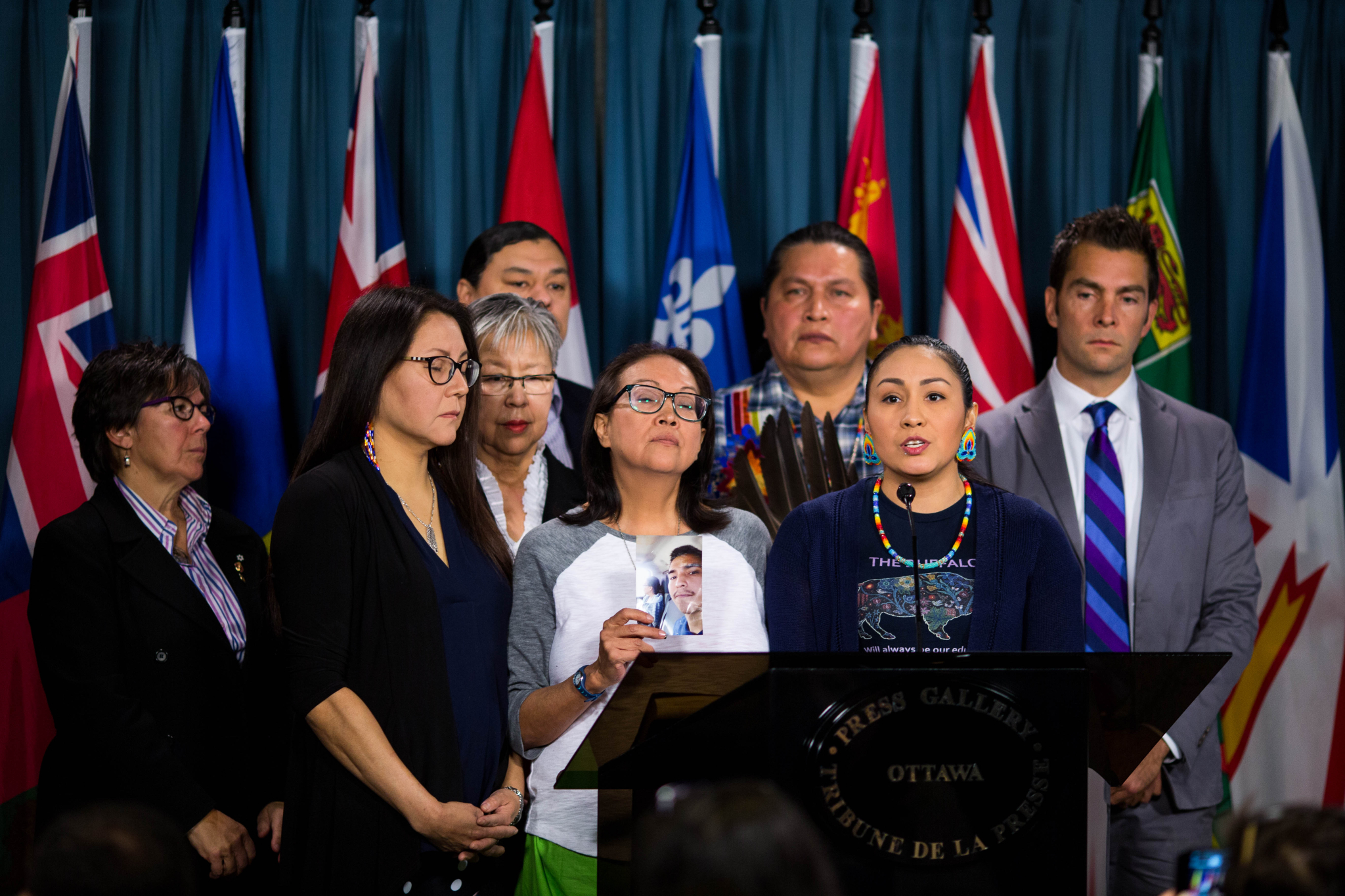 Colten Boushie's cousin, Jade Tootoosis Brown, and other members of his family speak to reporters in Ottawa on February 14, 2018, addressing the not guilty verdict of farmer Gerald Stanley who fatally shot the 22-year-old in 2016. Photo by Alex Tétreault
Previous story
Next story

Four months before the not-guilty verdict in the killing of Colten Boushie ignited concern across Canada, a poll indicated that half of Canadians believe the justice system has not done enough to address bias against Aboriginal Canadians.

The poll also indicated that only half of Canadians who have been to court in a criminal case found the outcome fair. The poll suggests seven in ten Canadians regard the justice system as “too soft” on criminals. And a vast majority say justice takes too long.

The findings were in an online poll of 1,005 people by Insights West in October, 2017, released now to show that some of the controversy ignited by Gerald Stanley’s acquittal for second-degree murder was already smouldering.

The findings provide a glimpse into how Canadians regard the justice system on other issues made topical by the Boushie case: delays, leniency, and quality of counsel.

Controversy over the justice system, notably the treatment of Aboriginal people, burst out after Stanley, a 56-year-old Saskatchewan farmer, was recently acquitted of second-degree murder in the shooting death of Boushie, 22, a member of Red Pheasant First Nation.

The verdict was delivered by a jury and set off protests and solidarity gatherings in many communities across Canada, as well as federal government promises to address concerns about the justice system.

The poll indicated a huge 84 per cent of Canadians—and 87 per cent of those who have interacted with the justice system—think more resources are needed and that cases take too long.

Fifty-two per cent agreed with the statement: “The justice system has not done enough to address bias against Aboriginal Canadians.”

Seven in ten Canadians and 76 per cent of those who have been to court said that the justice system is “too soft” on offenders when it comes to criminal cases.

Delays, leniency, bias against Aboriginal Canadians and quality of counsel. These are not new issues that deserve a look...Canadians who have dealt with the justice system know this all too well.

Finally, a view shared by 87 per cent of Canadians and 89 per cent of those who interacted with the justice system: “The outcome of cases depends heavily on how good your lawyer is.”

Half of those polled had never had direct interaction with the justice system. The dealings of the remaining Canadians can be summed up as “traffic and bylaw” (25 per cent), “family” (24 per cent), “criminal” (16 per cent) and “small claims” (15 per cent).

We asked those who actually went to court to say whether they found the outcome “fair” or “unfair.” Majorities of those who dealt with “traffic and bylaw” (such as disputing a driving ticket or parking violation) and “family” (such as divorce, custody or spousal support), said the outcome was fair (fifty-nine per cent and fifty- six per cent respectively).

Canadians who went to small claims court (which usually entails unpaid accounts for goods and services) were almost evenly split, with 50 per cent saying the resolution was “fair” and 48 per cent “unfair.”

Half say the justice system is unfair

On criminal cases, there were significant regional differences. Quebecers and Albertans were the least likely to call the resolution “unfair” (34 per cent and 40 per cent respectively), while Ontarians (53 per cent) and those in Saskatchewan and Manitoba (63 per cent) were the most likely to feel duped.

Some of the divisions outlined in the survey are expected. A parking violation may not have gone your way, and visits to family court and small claims court often lead to settlements that end up making everybody unhappy. But a near 50/50 split on the perception of fairness in criminal court cases is noteworthy.

The situation becomes direr when we ask Canadians why they feel dejected after a criminal case.

“The defendant received nothing but a slap on the wrist,” wrote a man from Atlantic Canada. “When all was said and done, he could pay his debt to society and get on with his life—I am still paying the price for what he did and will likely continue to do so.”

“The person I had seen stealing was let off because the lawyers said he mistakenly thought it was okay,” wrote a man from Ontario.

“As a witness, I was subjected to complete character assassination by the defence counsel,” wrote a woman from British Columbia. “Police investigated, recommended charges to Crown, Crown approved the charges, but the justice system failed.”

Delays, leniency, bias against Aboriginal Canadians and quality of counsel: these are not new issues that deserve a look only after a specific case captures our attention. Canadians who have dealt with the justice system know this all too well.

Results were based on an online study conducted by Insights West from October 24 to October 26, 2017, among 1,005 Canadian adults. The data was statistically weighted according to Canadian census figures for age, gender and region. The margin of error—which measures sample variability—is plus or minus 3.1 percentage points for the entire sample, 19 times out of 20.

The criminal justice system is not a system at all, but a series of moving parts, each of which is focused on its own self interest, first and foremost. Victims are at best an afterthought, in spite of nice words occasionally spoken. It is an overwhelmingly and deliberately complex system. The deck is seriously tilted against anyone without deep pockets. If you are indigenous and also without deep pockets, it is even more tilted. As it now stands, it is lucrative for those in control, and there is absolutely no incentive to do anything different, or anything more quickly. Self interest is the real problem, but the self interest is very well concealed by those who speak unctuously so often about the rights of people, while at the same time ensuring the continuation of a system that guarantees the violation of those rights.

yes it’s absolutely absurd, we need to change it. I just had to pay for someone else’s shitty driving because they told me it was innocent until proven guilty but they just took the officers word over mine because of “training” he had as if that excuses him from making any kind of mistakes. I have really bad anxiety but not enough money for a lawyer so I tried to suck it up and defend myself even made notes, but once I was in there there were two cops teaming up on me when only one was actually there when the incident occurred, and my anxiety got the best of me. I even gave the judge enough reason to doubt what the officer stated because he wasn’t stationary we were traveling opposite directions and I was in a group of myself and 6 other cars at least. I chose to pull into the other lane at the wrong time let me tell you and now I am scared to drive because I get punished for other people’s driving. And they make it so hard for you to charge people criminally as well it’s ridiculous I have statements, witnesses, messages and a list of people who can be called in but they expect me to know the exact dates of each incident that occurred when my son and I were in the situation for 4.5 years do you know how much happened in that amount of time and who the heck in awful situations is thinking to remember dates and times to everything while it’s occurring?? something has got to change and fast too many people out on power trips getting away with too much.