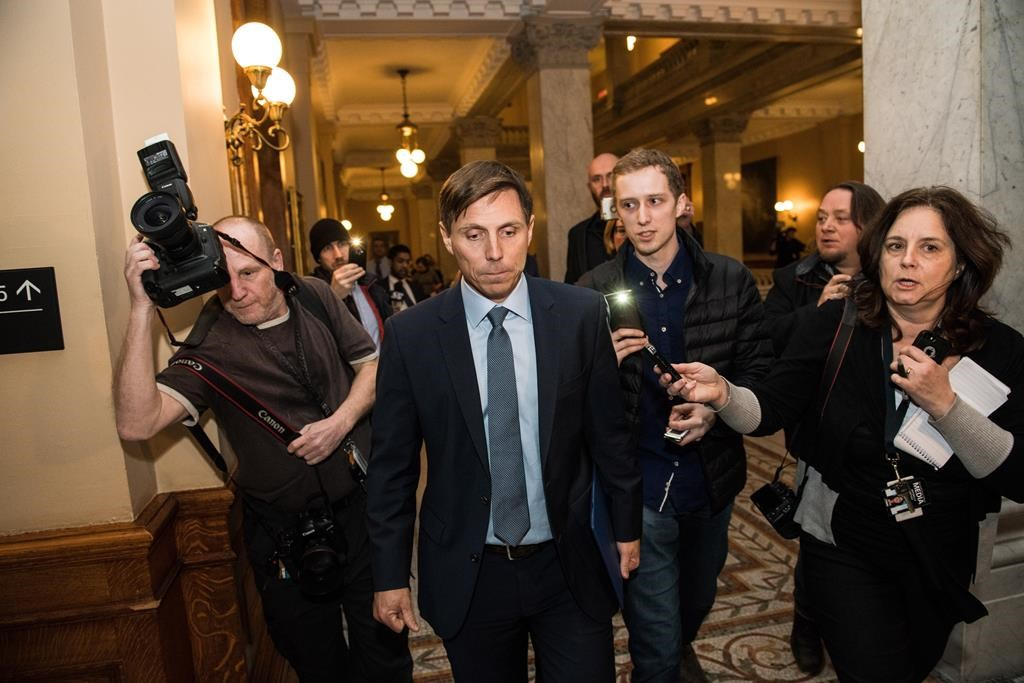 Former Ontario Progressive Conservative leader Patrick Brown denied what he described as "troubling allegations" in a short statement made in Toronto on Jan. 24, 2018. File photo by The Canadian Press
Previous story
Next story

Patrick Brown has officially joined the race to lead Ontario's Progressive Conservatives in an effort to reclaim the party's top job, which he was forced to give up last month amid sexual misconduct allegations.

The Barrie, Ont., politician arrived at the party headquarters in Toronto late Friday afternoon, moments ahead of a registration deadline. Elections Ontario has since listed him as one of five candidates vying for the party's top post months ahead of a spring provincial election.

Earlier on Friday, Brown was kicked out of the Tory caucus, which means he will sit as an independent when the legislature resumes on Tuesday.

The interim leader of Ontario's Progressive Conservative party issued a statement Friday morning announcing that Brown was being booted.

"Shortly after becoming interim leader, I asked Patrick Brown to step aside from the PC caucus," says a statement posted to the party's website on behalf of Vic Fedeli. "Earlier today, Mr. Brown was notified that he has been removed from the PC caucus effective immediately."

The announcement comes just before Ontario's long weekend, and follows a report that Brown had not actually resigned as party leader following allegations of sexual misconduct.

Brown repeated this claim in an interview, broadcast on Thursday, by Global News, saying that the resignation letter was sent out without his approval and that he was caught off guard.

This version of events, however, appeared to be contradicted on Friday by a Toronto Star report which released an audio recording of Brown telling his caucus during a conference call that he would resign.

“Despite the fact that this is character assassination and false allegations, I don’t want any of us to set back on our mission to defeat Kathleen Wynne,” Brown is heard saying during the recording, posted online by the Star.

“I’ve asked (director of communications) Rebecca (Thompson) to prepare a statement that I will resign," Brown says.

“And I’ve asked her to figure out at what point tomorrow that is set and she has drafted a statement while you guys were on the call and she can read it to you if you want to hear what we’ve put together so far.”

Brown has mounted a campaign in recent days to clear his name, alleging two women who spoke out against him in late January were lying and possibly manipulated by his political enemies inside and outside the party. He has also vowed to sue CTV News, which broadcast the allegations. CTV has said it stands by its reporting.

Mulroney and Ford said Brown joining the race pulled attention away from what should be the party's real objectives.

"Patrick Brown made the right decision to step down. A leadership election is not the place for him to clear his name," Mulroney said on Twitter. "Our focus should remain on beating (Premier) Kathleen Wynne in less than 100 days. This is a distraction from that and I am disappointed."

The determination of who is suitable to be a candidate in this leadership race is up to LEOC. As I’ve said before, Patrick Brown made the right decision to step down. A leadership election is not the place for him to try to clear his name.

Ford said in a statement that the party is stronger without Brown, citing a boost in fundraising and memberships since the former leader resigned.

"The Ontario PC Party needs to focus on defeating the (Kathleen) Wynne Liberals in June," he said.

Elliott also stressed the importance of unity ahead of the spring election.

"With fewer than 100 days, now is a time for unity. I am the leader that can unite the party and beat Kathleen Wynne," she said in a statement.

The party has already kicked off a leadership race with four candidates: Christine Elliott, Doug Ford, Tanya Granic Allen and Caroline Mulroney. The party is expected to choose a new leader March 10.

The Ontario legislature is expected to sit again on Tuesday, after Family Day.

with files from Paola Loriggio , The Canadian Press

Editor's note: This article was updated at 1:15 p.m. ET on Friday with additional information reported by Global News and the Toronto Star. It was updated again at 5:09 p.m. with information about Patrick Brown entering the Progressive Conservative leadership race.

It appears that Mr. Brown has

It appears that Mr. Brown has difficulty recalling his very recent resignation, with his approval, or not?

Would this suggest his recall of much less recent actions he is accused of committing (without his accusers' approvals) is accurate or not?

His interview aired yesterday on Global TV with Carolyn Jarvis suggests his accusers fabricated information concerning their accusations. (location, time, those present, etc.) Mr. Brown has shown his own memory of events over a much, much more recent period of time is equally selective and as inaccurate as his accusers?

His bed has been made, unfortunately, at his own hand of resignation contradiction.

The PCs have a sinking ship, and Christine Elliott is the only one who knows how to swim.

Good opportunity to be GREEN for the next provincial election.