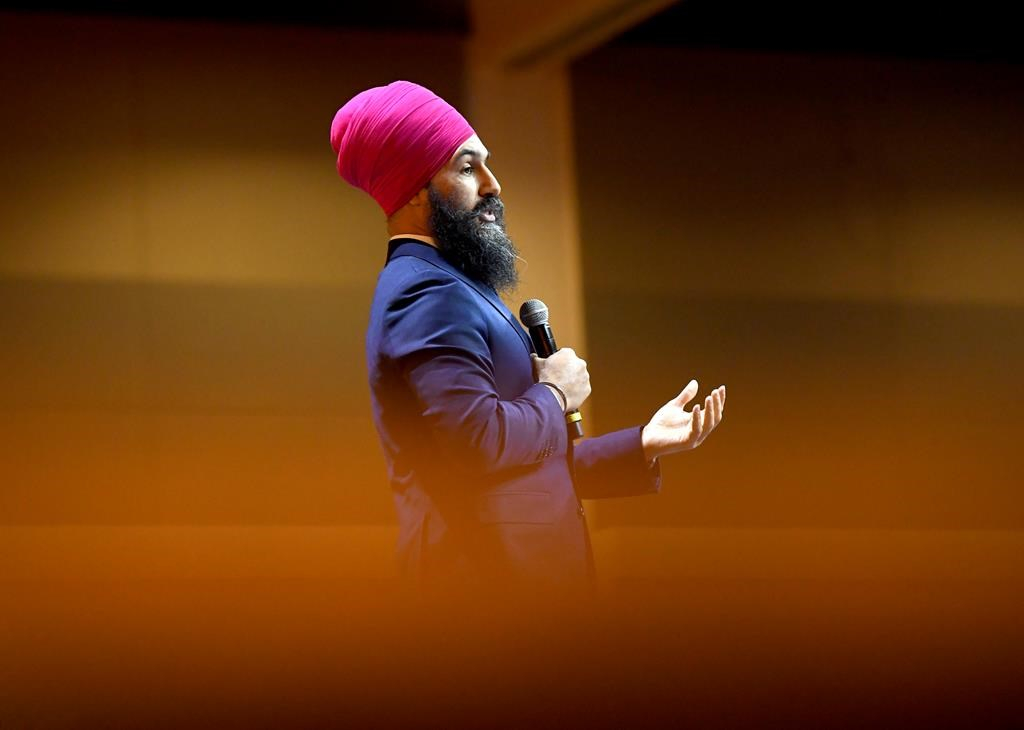 Jagmeet Singh issued a call-to-arms against inequality as he sought to put his stamp on the federal NDP on Saturday by taking aim at the Trudeau government and foreign web giants while offering a full-fledged defence of taxes and public services.

He delivered the battle cry at the NDP's national convention and, as Singh's first major address to the party since he became leader in October, aimed to motivate delegates as they looked to turn the page on the last election and prepare for the next.

"The time for timid is over," Singh said. "Too many people have felt stuck for too long. People are counting on us. We can't let them down. We need to win."

The NDP has appeared stuck in neutral for the past two-plus years with public opinion polls and several recent byelection results showing the third-place party struggling to find momentum even after Singh took the helm.

Convention delegates had been anxiously waiting to hear from their leader in the hopes his address, which clocked in at close to 40 minutes, would provide the NDP with an injection of energy while setting the party on a new, winning course.

Singh kicked off his speech by railing against growing income inequality in Canada before bucking what has become political orthodoxy by criticizing leaders who argue "taxes just take something away from you, rather than give something back to us all."

He later doubled down on that message, saying taxes "are investments into building a fairer society for us all" before blasting what he described as a "rigged tax system that benefits the ultra-rich" and criticizing those who don't pay their fair share.

A large part of his attack was directed at foreign web giants, many of which don't pay income tax in Canada despite repeated calls for the federal government to change that policy as a matter of fairness for Canadian companies.

Singh also blasted the Liberals' recent agreement with Netflix, which saw the online streaming giant pledge $500 million over five years to set up an office in Canada and create Canadian content, but which has sparked a massive revolt in Quebec.

The NDP leader meanwhile promised to better protect the pensions of workers whose companies go bankrupt and change the electoral system to proportional representation — all in the name of fairness.

He went on to offer a full-throated defence of government-delivered services, which he described as essential for equality, before calling for universal pharmaceutical and dental care, free tuition, and more affordable housing.

Singh didn't dwell on the details, including how the government would pay for those services, but those questions are sure to come as New Democrats look to begin building their campaign platform before next year's election.

The NDP leader, who is the first visible minority to lead a major federal party in Canada, concluded by calling for equality between all Canadians, as he referenced the Colten Boushie verdict, last year's Quebec mosque shooting and the #MeToo movement.

The speech was delivered before a mandatory review of Singh's leadership, and there had been questions in the hallways outside the main meeting room over how much support he would receive, particularly given the party's apparent lack of momentum.

But Singh easily survived the test, as more than 90 per cent of delegates voted against holding another leadership race, meaning he will emerge from the convention and head into the party's election planning in earnest with a strong mandate.

Despite a sharp debate over a resolution on Israel on Saturday night, the federal party appeared poised to emerge from this weekend's convention more united than after its last in 2016.

That gathering saw Tom Mulcair lose his own leadership review and deep divisions over whether to oppose pipelines.

While the fight over pipelines has continued between the NDP provincial governments in Alberta and British Columbia, which are at odds over the Trans Mountain Pipeline, it barely registered during this weekend's convention.

Still, many delegates privately acknowledged that the party faces significant challenges before it is ready to fight for power next year, including how to raise Singh's profile, fundraising, and finding realistic policy positions that will resonate with voters.

Despite those concerns, Ontario NDP leader Andrea Horwath, who will be fighting her own election battle in the coming months, gave Singh, who previously served as her deputy leader, a vote of approval.

"It's a matter of taking the momentum that is building here and pushing that out to the rest of the country," she said.

"And I know Jagmeet has a lot of energy ... so I have a lot of confidence that he's going to be able to take that energy that's kind of bubbling around here and move it out to the rest of the nation."