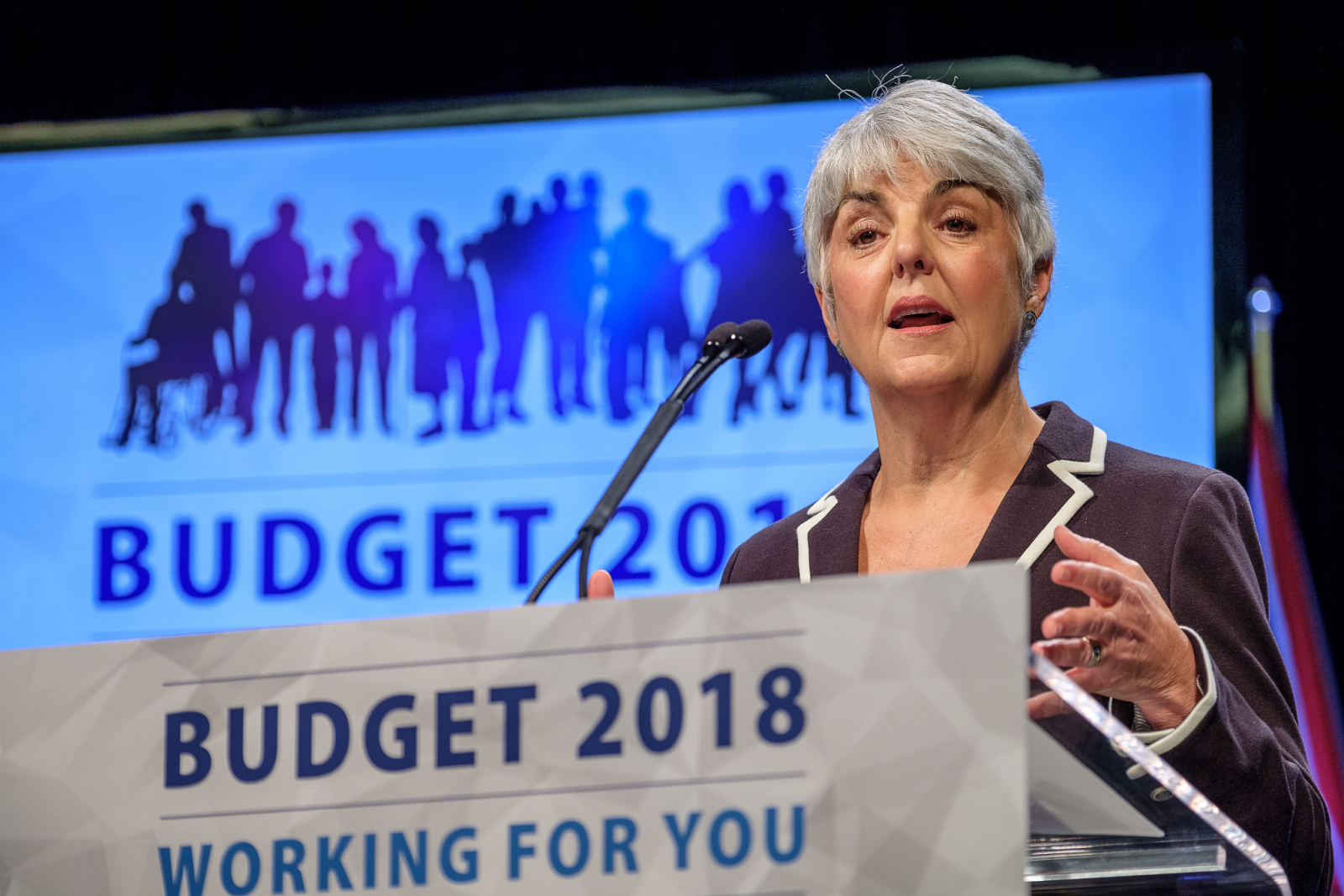 The NDP’s first full budget is a bold, ambitious plan for change in B.C., particularly when it comes to housing, childcare and how British Columbians pay for health care.

The measures introduced in the balanced budget are formidable and include significant moves like a speculation tax on real estate, a $1 billion investment in childcare and a wholesale change to how the province pays for healthcare.

“People have been clearly hurt by this housing crisis. People want government to take action,” Finance Minister Carole James said. “This tax will penalize people who have been parking their capital in our real estate, simply to speculate.”

On Wednesday, the foreign buyers’ tax will increase to 20 per cent from 15 and will be expanded to apply in other areas of the province, including the Victoria region, the Fraser Valley, the Central Okanagan and Nanaimo.

A homeowners’ registry will be created and will be publicly available and shared with law enforcement and tax auditors, in a bid to stop hidden ownership by numbered companies and off shore and domestic trusts. Another database will be created on condominium pre-sales to ensure that all taxes are paid.

Further, the property purchase tax will go up and the school tax rate – a portion of annual property tax – will be increased, but both will rise only for homes valued over $3 million.

“Housing affordability affects us all. The problem has been ignored for too long and the consequences are being felt throughout B.C. with housing costs skyrocketing,” James said. “B.C.’s real estate market should not be used as a stock market. It should be used to provide safe and secure homes for families, renters, students and seniors.”

She said three out of five Vancouver Board of Trade members said housing affordability is a barrier to getting and keeping employees.

“People have been clearly hurt by this housing crisis. People want government to take action,” the finance minister said, on the new speculation tax on real estate in B.C.'s urban areas.

When questioned about whether people’s equity in their homes would be at risk, James said the government is hoping to make houses more affordable, to ensure that housing is not used for speculation and to make more homes available to renters.

“We are taking some bold measures, there is no question,” James said. “We’re looking to moderate the market… so that low and middle income families can afford to live in the community they work in.”

The budget offers younger British Columbians real reason to celebrate and makes more progress than we have seen in years on childcare and housing, said Paul Kershaw, a University of British Columbia professor and the founder of Generation Squeeze, an organization that advocates for young adults.

“For years, Generation Squeeze has been encouraging governments to reduce harmful demand, stimulate a surge in suitable supply, and tax housing wealth fairly,” Kershaw said in a statement. “The 2018 budget makes progress on all three areas.”

The NDP campaigned on a $400 annual renters’ tax credit, but that was not included in this budget. Instead, the budget promises a review of the homeowner’s grant program, to ensure it’s fair to both renters and homeowners. Renters will also see $116 million for two assistance programs, one for seniors and the other for low-income renters.

The NDP says its expenditure of $6.5 billion over the next 10 years in affordable housing is the biggest ever in the province. It includes building more than 14,000 rental units, housing for women and children affected by violence, student housing at post-secondary schools, social housing for Indigenous people, supportive homes for homeless people and upgrading existing social housing.

The budget allocates more than $1 billion over three years in childcare, the first steps towards what James calls “a made-in-B.C. universal childcare system” that is “affordable and accessible.”

While the NDP campaigned on a $10-a-day childcare program, that slogan was nowhere to be found in the budget or James’s speech. However, childcare advocates like Sharon Gregson, who is part of the $10-a-day campaign, said it doesn’t matter if the government uses the campaign's branding as long as the public policy is good. She gave the government a strong “two thumbs up” on these first steps.

A good chunk – $630 million – of the $1 billion is for a new affordable childcare benefit, which James says has higher benefit rates and wider eligibility than the existing childcare subsidy. It will support up to 86,000 families, the budget says. The maximum benefit is $1250 per month and applies to families earning up to $45,000 a year and then gradually decreases up to those earning $111,000 per year.

Parent fees in licensed care for kids under age six will also be reduced through a childcare fee reduction program. This plan should help up to 50,000 families by 2020-21 and will provide a subsidy directly to childcare centres. It is not income-based.

Gregson said she would like to see fees capped at the centres that receive the fee reduction money, so that they have to pass on the savings to parents. She also wants to make sure employees in child care centres are paid fairly and that this happens sooner rather than later.

“Overall there is so much to be pleased about,” Gregson said. “They really are replacing the current fragmented system and building towards the $10-a-day plan.”

The budget also commits $237 million over three years to build 22,000 new licensed child care spaces over the next three years. It also includes funding from the federal government that will create more spaces and support childcare.

“This represents real transformative change in our society,” James said.

Medical Services Plan premiums will be eliminated entirely by January 1, 2020. However, they’re going to be replaced with a new employer-paid health tax, which is 1.95 per cent of payroll costs each year. The new tax is expected to bring in about $1.9 billion a year, while MSP premiums brought in $2.6 billion a year before the premiums were cut in half this past January 1.

“There is not an additional revenue for government,” James said.

James said public sector employers are expected to account for about 20 per cent of the total tax revenue, or about $380 million.

Small employers with payrolls under $1.5 million a year will pay a reduced rate, with those with a payroll of less than $500,000 a year paying nothing.

B.C. is the only province that charges MSP premiums and individuals pay a maximum of $37.50 a month. Until January, that maximum was $75 a month and premiums went up significantly over the past decade.

When asked if she expected pushback from employers on the new tax, James said the small business tax rate and the corporate tax rates are low.

“We have the lowest health tax rate in the country. The vast majority of businesses will not be paying this employer health tax,” James said. “We believe this is a fair process. This is a shift from an unfair regressive tax to a more fair tax system.”

James said employers specifically asked for action on housing and childcare and that she believes the B.C. tax system is competitive. But while not all employers paid for employees' MSP premiums, all employers over a certain size will pay the new tax.

The Business Council of British Columbia said it is is concerned about the cost of the new tax.

“Our initial assessment is that this new tax will increase overall payroll costs for our members by several hundred million dollars a year,” Greg D’Avignon, the Business Council’s President and CEO, said in a statement.

The BCBC said it supports the childcare investment and is cautious about the housing measures.

"While further review of their potential impact is warranted, the planned changes, taken together, are unprecedented in scope and may cause some disruption to the market,” Avignon said.

“We must act now, because the effects of climate change are already at our doorstep,” James said. “Wildfires are unpredictable, but we know they will worsen with climate change. We need to do more in communities to support our province’s response to wildfires.”

The budgeted amount falls well short of the $3.5 billion that UBC forest ecology professor Lori Daniels told the National Observer in November that it would take to properly treat the highest risk areas of the province to avoid another summer like 2017. Treatment includes strategies like removing small trees and other burnable debris from the forests as well as doing controlled burns.

Help for the vulnerable

James committed to keeping more Indigenous children with their families, rather than taking them into care.

Foster children who turn 19 and age out of care will get some more support, too.

“Youth who are aging out of foster care have higher rates of drug dependency, homelessness, school drop-out rates and income assistance reliance. It’s not the fault of youth: it’s the fault of a failed system,” James said.

Since last fall, 229 former foster youth have been able to access free tuition at post-secondary schools in the province, after the NDP government expanded a tuition-waiver program to all schools, James said.

The budget adds $30 million over three years to enhance an income support program for former foster children who are in school or training programs to $1,250 a month from $1,000. It will also increase the age of eligibility to 26 and make the funding available 12 months a year instead of eight.

“We have seen what these young people can do when they have support and guidance as other young adults when they do leave home,” James said. “This funding will ensure more young people do not feel alone, and have help with rent, groceries and career advice to help them on their path to adulthood.”

On an interesting note, the budget also introduces $4 million to test the feasibility of a basic income in the province. A basic income is a plan under which all people get a guaranteed basic income, with no strings attached. In Ontario, a basic income pilot project gives participants about $1,320 a month and allows them to keep some earned income.

“There are a number of different options on basic income … we will be researching all options … to make sure we find something that works for British Columbia,” James said.

Most people in the province will probably be affected by at least one, if not several, of the measures introduced in this very detailed, comprehensive and ambitious budget. It aspires to momentous and consequential societal change. Let's hope it lives up to its intentions.

Tracy Sherlock writes about B.C. politics for the National Observer. She can be reached at [email protected].

In BC, schools need to stop sending children like Joshua home

I am very happy to see that

I am very happy to see that MSP premiums are coming to an end. This will also save about 40 million dollars a year in collectng them.

Thanks for commenting, David!

Thanks for commenting, David! The MSP premium change is a major policy shift.

Hi David,
Thanks for reading and commenting! The new health tax may require a similar amount to collect, but I am not certain of that.

Thanks for reading and

Thanks for reading and commenting, John. I guess we will see what happens.