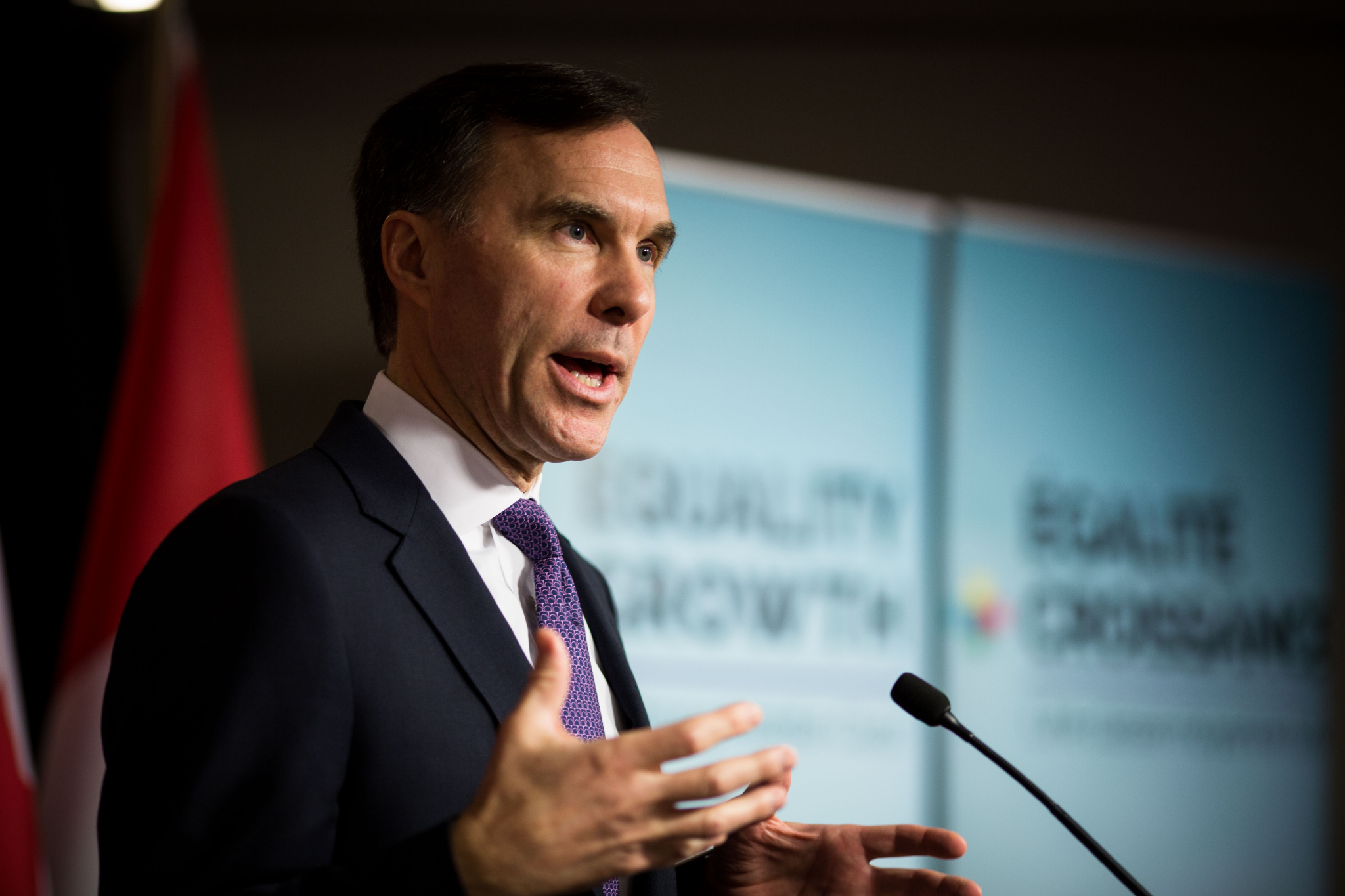 Finance Minister Bill Morneau addresses the press as the Liberal federal government unveils its 2018 budget in Ottawa on Feb. 27, 2018. Photo by Alex Tétreault
Next story

The federal government is going to scrap a “flawed” and “unacceptable” pay system that struggled to deliver pay to public servants, despite a price tag that will likely exceed $1 billion, Finance Minister Bill Morneau announced in his new budget tabled Tuesday in Parliament.

Taxpayers have already spent more than $460 million on the troubled Phoenix pay system, introduced in 2016, according to the new budget. The pay system for public servants was part of a plan first launched by former prime minister Stephen Harper’s government in 2009.

It was “originally intended to save money,” Morneau’s budget said.

Prime Minister Justin Trudeau’s Liberal government proceeded with Harper’s plan and stuck with Phoenix for two years, despite a flood of complaints from bureaucrats who were not getting paid.

“Since that time, it has been obvious that the outcomes have been unacceptable for both the government and its employees,” said the budget.

Morneau’s budget also said that the government would need to spend an additional $450 million over the next six years to address ongoing problems with Phoenix, as well as to develop a brand new system.

Responding to the news, Hassan Yussuff, president of the Canadian Labour Congress, said in an interview he was pleased the government had “finally bit the bullet” and set out to build a new system.

“I think it’s the right decision and I think it will send a good message that the government is no longer going to put any faith in fixing the Phoenix system because I don’t think it can be fixed,” said Yussuff, whose organization represents labour unions across the country.

Yussuff estimated 300,000 people have been affected by problems with the system.

Apart from leaving many public servants in Canada without pay, the government said that the Phoenix system also wound up paying others too much money. This will also wind up costing $5.5 million in new spending for the Canada Revenue Agency to process the individual tax reassessments that will be required because of the government’s blunder.

“Finally, to address the real mental and emotional stress and unacceptable financial impacts on public servants, the government has initiated discussions with public service representatives to address the numerous grievances and legal actions,” the budget said.

“Similarly, the government will also take action to reimburse missing and inaccurate dues that are owing to public sector unions.”

Yussuff said he wants to see former Conservative treasury board president Tony Clement “get up in the House of Commons and take responsibility for this mess.” He added that the main contractor, IBM, should not be contracted to build any other system for the government, as they should have flagged issues with the program.

“IBM who built the system also have to be held accountable,” Yussuff said.

The budget also said that the system was under-resourced and “suffered from poor planning and implementation,” but that the government was now doing everything it could “to make this right.”

This includes hiring several hundred people to rebuild the capacity that was lost due to what the Trudeau government described as a “flawed business plan.” The government said it also had to take action to reimburse personal expenses incurred by employees as a result of the pay issues.

“However, serious issues and challenges with the Phoenix pay system continue, and too many public servants are not being properly paid,” the government said.

Well, the brave souls in our

Well, the brave souls in our government have finally rolled up their sleeves, and declared, "it's broke" regarding the Phoenix payroll system. This, after countless screw-ups over the last few years. Wonder what lobbyist sold this idea? Now we are informed that the final tally will be $1 billion to what? get rid of the system and go back to the old one? not likely, taxpayers are on the hook for this debacle, and yet, we don't seem overly outraged. The Trudeau government has fumbled the ball on this. The $1 billion price tag could have been used to get fresh water to the over 100 First Nations reserves that are without it, or a myriad of other good social services. Wasting money in a downturned economy seems to me the height of insanity. Time for the finance minister to step down, as he has no idea how wasteful this is.

It's a shame they could not

It's a shame they could not have learnt from Queensland Australia, where it didn't work years ago!!!!!!!!!!!!!

Too many commissions at stake!!

Canadian taxpayers are constantly replenishing the deep pockets this government loves to empty, leaving nothing to show for its exorbitant spending.
Time for a change in October 2019?