Trial begins over fuel spill in English Bay, one defendant doesn't show up 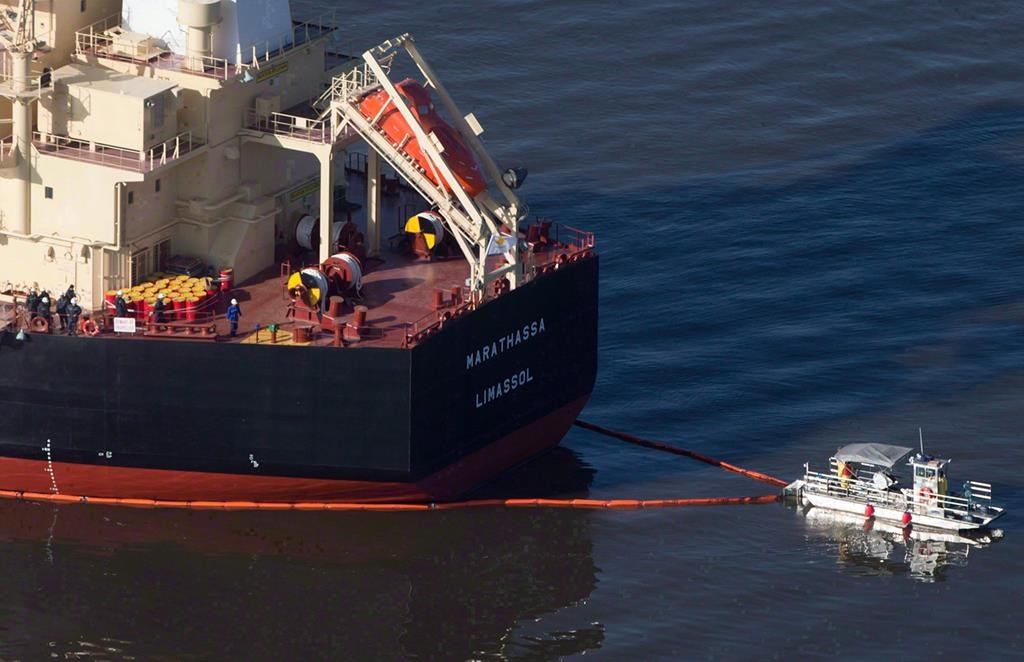 A spill response boat secures a boom around the bulk carrier cargo ship MV Marathassa after a bunker fuel spill on Burrard Inlet in Vancouver, B.C., on April 9, 2015. File photo by The Canadian Press/Darryl Dyck
Previous story
Next story

A port worker says he suspected large plumes of oil that were shining on the surface of the water in Vancouver's harbour nearly three years ago was bunker fuel, based on the smell.

A B.C. provincial court judge heard Monday that Mark James of the Port of Metro Vancouver responded to reports of a spill on April 15, 2015.

"When you smell gasoline, you know the smell of gasoline," James testified on the opening day of a trial for a company and vessel charged after the spill. "We knew it was bunker oil, which was serious."

The charges were laid after 2,700 litres of fuel leaked into English Bay.

A judge earlier allowed the trial to go ahead even without one defendant attending the hearing.

Alassia has denied ownership of the Marathassa and the company was not represented in court on Monday. Judge Kathryn Denhoff previously ruled the trial would proceed without Alassia’s participation, and she affirmed that decision as the trial began.

Outside court, Crown attorney Jessica Lawn said Alassia is the alleged operator of the vessel and evidence supporting that assertion could be valuable to the case.

"It's the Crown's duty to prove that Alassia, as charged on the information, committed the offences in the way that we've alleged," she said.

In his testimony, James said he spotted patches of oil as long as 4.5 metres and as wide as two metres while he tried to investigate the source. He described collecting samples and investigating about a half dozen vessels that were anchored in the bay at the time.

When he boarded the Marathassa, James said the captain gave him a blank sheet of paper with the vessel's letterhead so that he could take some of the notes he relied on in court.

The Crown had James read the footer of the sheet to the court, which included Alassia's name, address and contact information.

Marathassa's counsel, David Jones, was in court to cross-examine James.

Alassia explained its reasons for not appearing in provincial court in a separate decision from the B.C. Supreme Court, saying to do so would indicate it recognizes the court's authority to hear the case.

In that case, the firm is fighting the process used to serve a summons. The court supported a justice of the peace's certification of the summons in a ruling last fall, but Alassia has filed an appeal.

Lawn said if convicted, the firm and vessel could face significant fines, with maximum penalty for some of the violations set at $4 million.

First responders, investigators from Transport Canada and environmental experts are expected to testify in the coming weeks, Lawn said.

The trial is scheduled to continue until April 20.