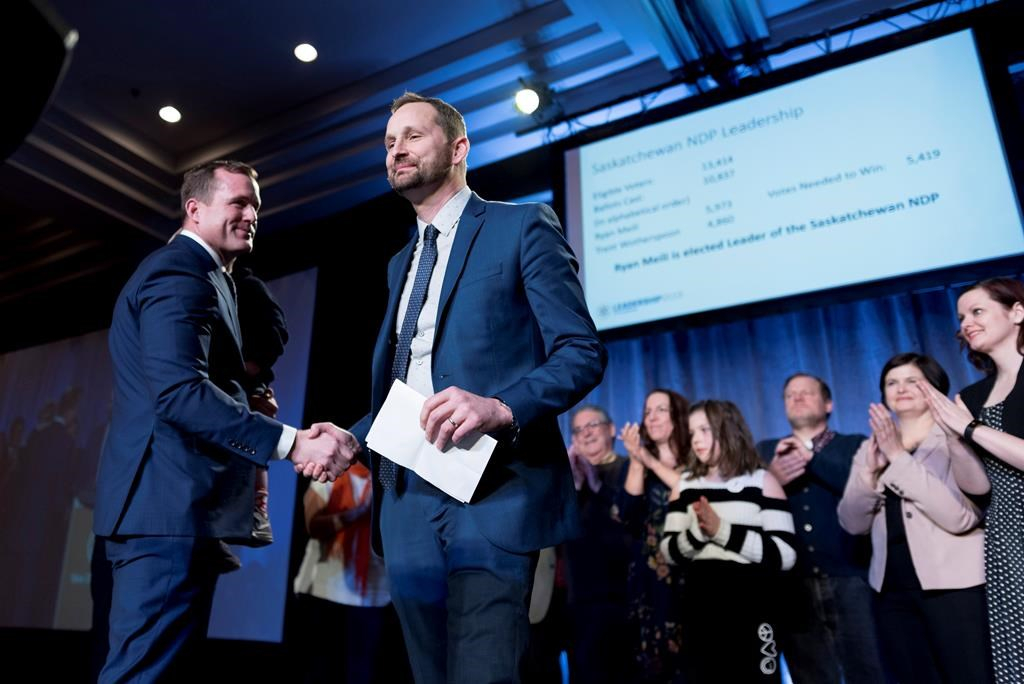 Trent Wotherspoon, left, shakes hands with Ryan Meili, center, after the results of the Saskatchewan New Democrats leadership convention are announced at the Delta Hotel in Regina, Saskatchewan on March 3, 2018. Photo by The Canadian Press/Michael Bell
Previous story
Next story

Saskatchewan's NDP has chosen Ryan Meili to be its new leader, who the party hopes will enable it to topple a weakened government that's held power for more than a decade.

Meili, a physician who represents Saskatoon Meewasin in the legislature, defeated Regina MLA Trent Wotherspoon at a leadership convention in Regina on Saturday.

"It's blowing pretty hard out there. I think those might be the winds of change," Meili said during his victory speech.

Lorne Calvert, who was at Saturday's convention, was the last NDP premier, losing power to the Saskatchewan Party under the leadership of Brad Wall in 2007.

But the Saskatchewan Party has faced intense criticism for last year's austerity budget, and Wall has since stepped aside and replaced by Scott Moe.

The next provincial election is still more than two years away and the candidates, as well as other speakers, expressed optimism the government is on its last legs.

"We will win when we put forth a vision for Saskatchewan that excites and inspires people to look at us and say yes, that is the change we're looking for," Meili said in a speech earlier Saturday before the vote.

"This is our moment. This is our time — our time to show that New Democrats are ready to lead."

Meili tried twice before to become the party's leader, losing to Dwain Lingenfelter in 2009 and Cam Broten in 2012.

In this campaign, he pledged to refuse donations from corporations or unions, saying he would only fundraise through individual donors.

Broten led the party in the 2016 provincial election. Wotherspoon, who lost to Broten in the NDP leadership contest in 2013, was named interim leader, but he stepped down last June to run for the job permanently.

Bitter party divisions that can become focal points of some leadership contests appeared absent form this one.

Meili and Wotherpoon mentioned support for many of the same issues during their speeches to the convention, including pharmacare, restoring a provincial bus service that was cut by the Saskatchewan Party and protecting the province's Crown corporations.

Wotherspoon thanked Meili for his ideas, care and hard work. Meili, meanwhile, made Wotherspoon the first person he thanked when he took the stage as the party's new leader.

Meili said that during the campaign, people told him the NDP couldn't lose because they had two great choices.

The convention was originally scheduled for May, but the party decided in September to move up the date following Wall's announcement in August he was stepping down.

On Twitter, the next opponent Meili will face congratulated him on his win.