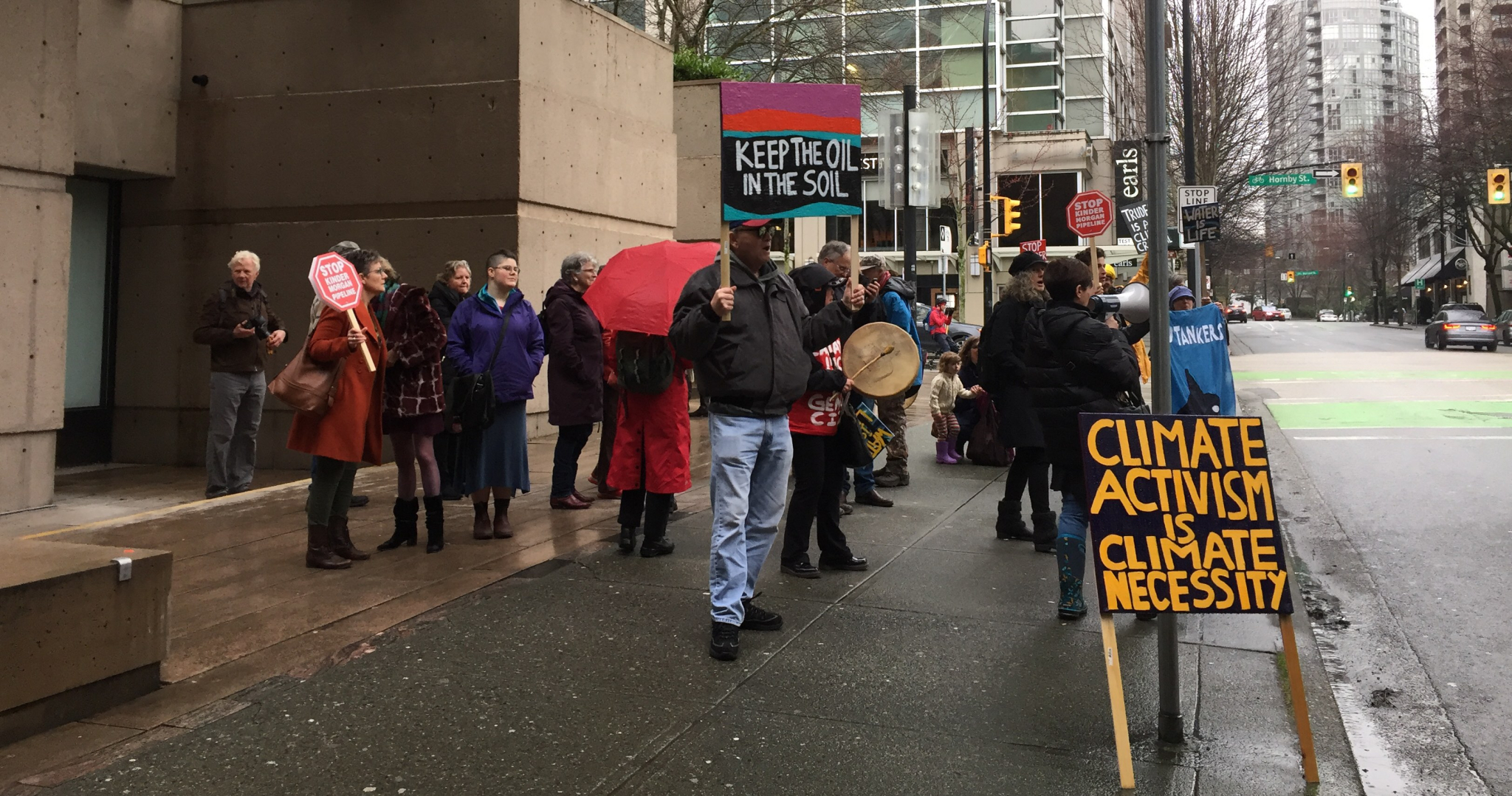 Protesters demonstrate outside the B.C. Supreme Court in Vancouver on March 15, 2018 ahead of a hearing into a request by Kinder Morgan for an injunction to stop blockades. Photo by Dylan Waisman
Previous story
Next story

The audience at a B.C. Supreme Court hearing burst into laughter on Wednesday after a lawyer for Texas-based multinational energy company Kinder Morgan said that its new pipeline expansion project was "in the best interest of Canada."

The courtroom gallery had about 100 seats, almost all of them filled with spectators and journalists gathered to witness the hearing about Kinder Morgan's request for an injunction to stop protesters from delaying construction of its multibillion dollar Trans Mountain expansion project.

The company's subsidiary, Trans Mountain, has specifically named 15 people, as well as John and Jane Doe and other "persons unknown" in its request to stop them from disrupting or even getting within 50 metres of its construction zone.

Lawyer Casey Leggett, who represents one of the defendants, described the exclusion zone, which crosses into yards and public parks, as "arbitrary and needless."

If you “kick a soccer ball too far astray and you might get arrested,” he joked, prompting more laughter from the gallery.

But the man presiding over the case, Justice Kenneth Affleck, wasn't laughing, instead showing some sympathy for the company.

“It’s a strategy intended to make it very difficult if not impossible for the plaintiff to carry on with the work," Affleck said, cutting off the lawyer. "To stand in the road and prevent a car from going by? That’s illegal.”

In its statement of claim, Kinder Morgan has alleged that some of the protesters are organizing blockades in construction areas that have caused "irreparable harm" and "extraordinary losses" due to delays that have occurred "almost every day" since November. Prior to Wednesday's hearing, Affleck had previously agreed to grant the company a temporary injunction.

Approved by the Trudeau government in November 2016, the Trans Mountain project would triple the capacity of an existing pipeline network allowing it to ship up to 890,000 barrels of crude oil per day from Alberta, home to the world's third largest oil reserves after Saudi Arabia and Venezuela, to a terminal in the metro Vancouver suburb of Burnaby.

Supporters of the project, including the federal and Alberta governments argue that the pipeline would generate jobs and growth in the oilpatch while the pipeline's detractors say that it will lead to spills and push Canada's climate change goals out of reach.

"They are individuals who say pipelines are bad, oil and gas is bad, here are all the hazards that are associated with it," said Maureen Killoran, the lawyer for Kinder Morgan. "And with respect, that's the job of the National Energy Board and that job has been done. It took three years to do it," she said to snickers.

Protesters are causing private and public nuisance by blocking roads and jumping onto vehicles, requiring Trans Mountain to ship workers in by water but blockades have appeared at marinas as well, Killoran said.

While Leggett urged the court to show tolerance for the inconveniences of some protest activity to protect a robust democracy, Killoran, a top Canadian litigator from a Calgary law firm, argued that the case “is not about freedom of expression, it’s about illegal activities and a blockade.”

She backed up that argument with evidence, quoting what the defendants themselves had said on social media about aiming to delay Trans Mountain's tree clearing work until March 26. After this date, the permit to cut trees is suspended until August, due to legal restrictions that prevent activity that interferes with the return of migratory birds. She said these efforts by activists could delay construction by months, costing the company $90 million for every month of delays.

"We have every indication based on the activities of the blockaders, based on what they're saying on Facebook and other social media sites and to the media, that this will continue," she said. "They have made a conscious choice to carry on."

'We walk up here every single day'

Killoran added that the company is also concerned about the safety of protesters, saying that this is “as big an issue for us as anything.” Since the blockades began, she said there have been “near misses with protesters” wearing dark clothing, blockading the work sites as early as 5 a.m.

She also dismissed suggestions that company representatives were trying to stop people from walking on paths or hanging out in their backyards, as alleged by Dogwood, a local B.C. environmental group.

“This will not stop people from walking on paths with their dogs,” Killoran said. “Trans Mountain isn’t targeting people who are going about their daily business, walking their dogs, driving their cars. No one is looking to make people uncomfortable in their homes... Our intention is not to make the average citizen who is walking their dog, compromised in any way.”

However, one member of the audience wasn't buying her arguments, repeating, "that's a lie." The outburst prompted a rebuke from Affleck who warned that he would eject anyone who continued to disrupt the proceedings.

A video posted online by Vancouver filmmaker Ina Mitchell this week, also contrasted with Killoran's statements in court, showing a couple of women walking on a path who were warned about the injunction by someone who appeared to be from Kinder Morgan.

Mitchell told National Observer that she shot the video on March 12, posting it on the same day. She also said that neither she, nor the women were activists, adding that the two women appeared to be residents from the neighbourhood.

"We walk up here every single day," one of the women is heard saying with astonishment on the video.

Back in court, Leggett suggested that any further injunction be extended only until March 19, by which date migratory birds returning in the spring may pass the area of the Westridge Marine Terminal.

Justice Affleck said that he has “no doubt whatsoever about the seriousness of which these people take this project” adding, “this is not for me to comment on”. He also noted that Kinder Morgan’s construction is lawful, despite whether the defendants think it should be or not.

Defendants are defiant about injunction

Outside the courtroom, some of the people named in Kinder Morgan's statement of claim were defiant when asked about the prospects of a permanent injunction.

“It ups the ante, it raises the stakes," David Mivasair told National Observer. "We anticipated this the whole time. Speaking for myself, I think we should get more people and keep doing the same thing because what we’re doing is obviously having an impact on this pipeline project.”

Bina Salimath, another person named in the notice of civil claim, said outside court that she will carry on with blockades even if a permanent injunction is granted because protesters anticipated that would happen.

The hearing resumes on Thursday, when the court is scheduled to hear from Gordon Cornwall, a defendant representing himself.