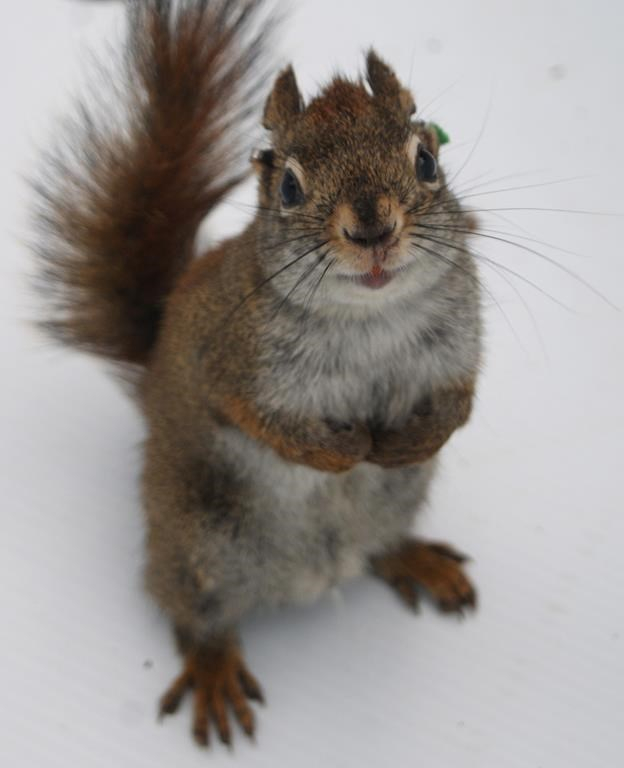 A male red squirrel who committed infanticide while a researcher watched is shown in a handout photo. Handout photo by The University of Alberta-Jessica Hainesa
Previous story
Next story

Scientists from the University of Alberta have discovered male red squirrels kill the offspring of their male rivals in years when there's a lot of food.

The research project, published Thursday in the journal Ecology, is the first to observe and document the unusual practice of the feisty rodents.

"It was definitely a complete surprise," said biologist Jessica Haines, a post-doctoral student who led the study. "It was kind of horrifying, but at the same time fascinating and really exciting to see this behaviour."

Haines witnessed that behaviour — called sexually selected infanticide — in the spring of 2014 when she was doing fieldwork on red squirrels near Kluane National Park in the southwest Yukon.

"I heard a commotion quite close to me and I walked quickly over, and that's when I saw the infanticide," she recalled. "It happened quite quickly."

Her research had already involved tagging some squirrels' ears with identifying markers, so she could tell exactly which ones were involved.

A male squirrel had entered a female's territory, grabbed her pup and killed it by biting its chest and stomach. He then dropped the dead pup when he was chased away by the mother, she said.

"All of her pups died eventually," said Haines. "I found one of them later and it had similar injuries that I had seen the male inflict on the pup he killed."

Genetic techniques were used to determine that the squirrel killing the pups was not their father.

"He was killing the offspring of his rivals," she said. "When the female had a second litter later that same year, he was the father of all of her offspring.

"He was able to gain a benefit from killing those pups."

The research showed that female squirrels breed more quickly if their first litter is killed.

The observations were only made in years when there were a lot of white spruce cones — the squirrel's main food source.

"The trees produce variable amounts of cones every year so periodically ... we have these years called mast years," Haines said.

Squirrels are actually able to predict when mast years are going to occur, she said.

"We think this infanticide happens more often during these mast years because that is when the females are likely to produce a second litter," she said.

Previous research has shown that despite the death of the first litter, survival rates of red squirrel pups are still higher in mast years.

Sexually selected infanticide is normally more common among species that live in groups, such as lions, which will kill the offspring of rivals before taking over the pride. It has also been documented in grizzly bears.