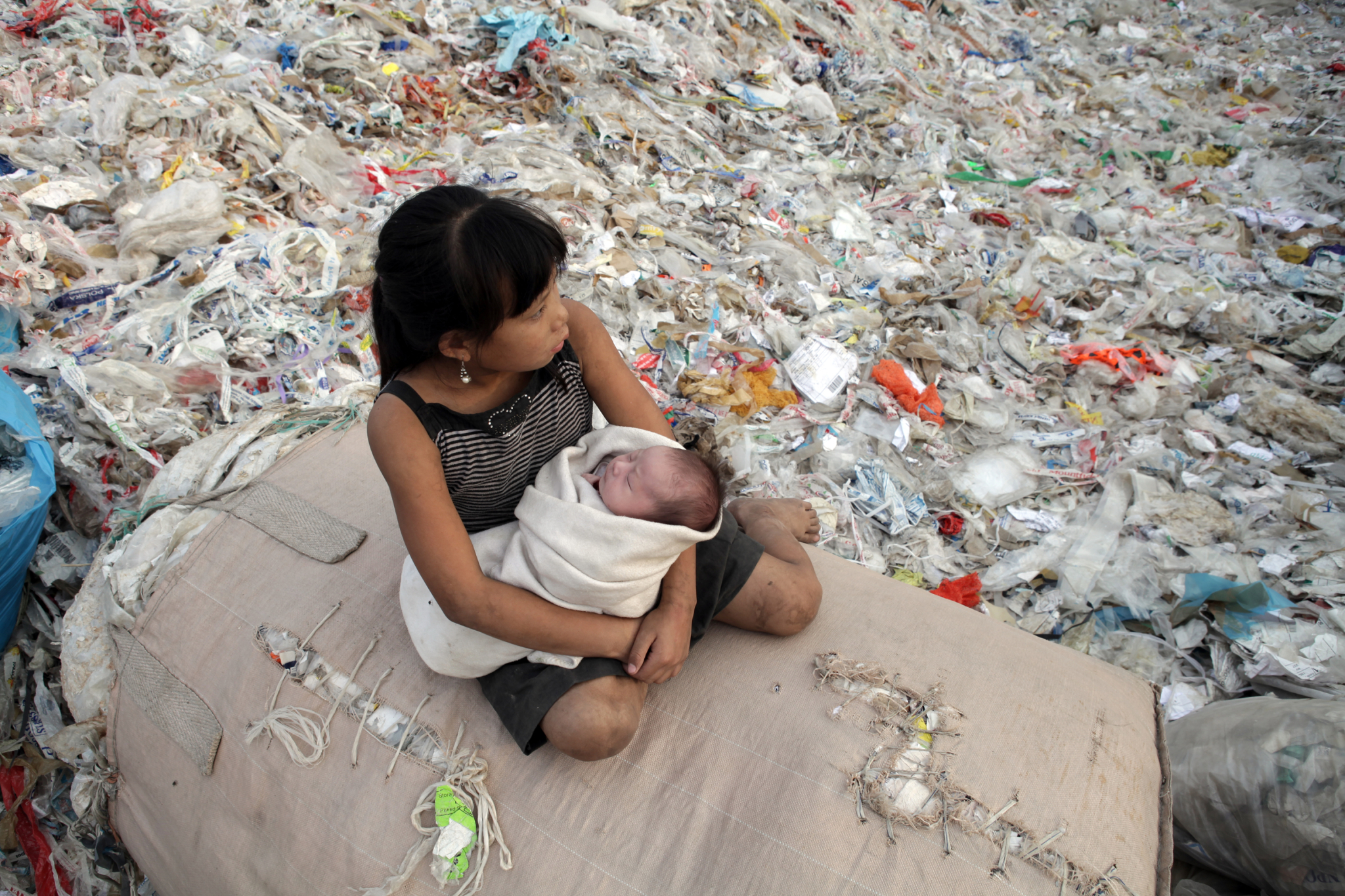 The daughter of a young plastic factory worker, Yi Jie, looks over a heap of plastic while cradling her baby sibling. Image from 'Plastic China' documentary website
Previous story
Next story

Bright-eyed children run between heaping piles of plastic, a worn-out worker spends his meager wages on alcohol, and a preteen girl gazes solemnly at Western product advertisements she picks out of the monstrous piles of trash around her home. Welcome to Wang Jiuliang’s Plastic China, a quiet, intimate look into the lives of two Chinese families barely scraping a living by laboring at a small family run recycling plant.

Plastic China focuses on materially ambitious factory-owner Kun, his employee Peng, and their families. Twenty-something Kun is a hard worker with a dream of buying a new car to boost his social status. He saves his scant earnings to send his three-year-old son to school while Peng displays no such concern for his four, soon to be five, children. When probed about why he doesn’t send his kids to school, his reply is that he prefers to spend money on drinking, musing that his children can attend school for free whenever they return to his home village. The whenever is ambiguous, as his 11-year-old daughter Yi Jie tells the camera that he’s been promising to send her to school since she was five.

Wang’s camera catches heartbreaking images of Jie, the preteen with a collapsing weight of responsibility on her young shoulders. She babysits, cooks, works and teaches her three younger siblings while her parents do the same back-breaking work day in and day out. She picks out broken Barbie dolls and passes over Western product labels, a seemingly deliberate shot for Wang to remind viewers of the vastly different worlds between the kids who tossed those toys away and the ones on the other side of the world who pick them out of the trash to play with.

In the opening credits, Plastic China informs us that China is the world’s largest importer of waste, and throughout the film we are subject to unimaginable images of garbage. Landfills stretch out endlessly, enormous hills of colourful plastic bottles loom in the distance, and what we can only presume to be toxic water run-off from the factory is what Jie uses to wet her hair before she brushes it. Boss Kun and his workers separate plastics by burning samples and quickly sniffing the fumes, stimulating God only knows what kinds of cancers and brain damage. The insane volume of sorted scraps are pushed through a machine that turns the plastic into a gross, grey sludge before it is transformed into small grey pellets.

Where Wang achieves sentimentality and awareness at displaying his subjects’ somber existence, he fails in giving his audience any objective information about the health, social, or environmental impacts of the Chinese recycling process. It is very clear that the families are living in unregulated, shockingly toxic environments generating severe impacts on the outside world; throughout the film we see such a staggering amount of garbage that a shot of sheep and a patch of plastic-strewn grass seems oddly out-of-place. It’s a moving film about the individuals left to deal with the First World’s trash, and while I enjoy documentaries that throw big, scary facts at me, I believe Wang omitted some objective information for a reason. He frightens viewers with images of the relentless plastic flowing through the small factory, preying on our ability to empathize with these poverty-stricken laborers. Instead of numbing us with facts like how China has contaminated over 80 per cent of its fresh water through landfills and processing, he gets us to feel bad for Kun, Peng and their kids; if we identified with their plight, perhaps we wouldn’t want to send so much trash for them to sort through. Maybe we would care about the health of those living at the bottom of the social ladder if we were a part their lives for 90 minutes.

This film debuted two years ago, but its relevance is striking in the wake of China’s sudden refusal to continue importing foreign waste. The ban was initiated in January of this year and undoubtedly the shockwaves are being felt in the international community as countries look to Asia for another foreign landfill. Experts warn of an increase in illegal dumping and incineration of plastics as prices for plastic scraps plummet in the wake of China’s exit from the market it dominated.

Up to 60 per cent of Quebec’s plastics went to China before its ban; Halifax is reportedly sending three hundred tonnes of plastic to landfill, and Calgary is sitting on five thousand tonnes of plastic waste, with all of that having gone to China in the past. Municipalities across Canada are struggling under the weight of the rapidly accumulating plastics with no plan in place to deal with them, and it will continue to worsen if we keep living the way we have been.

There is one obvious, clear, imperative measure that we all must make a priority- we must reduce the amount of plastics we use every day.

The low grade plastics normally sent to China consisted of plastic bags, food labels, coffee cups and more- all products that are normally used once before being tossed away. Without a fundamental cultural shift in our society’s grievous over-use of plastic, we will see the same mountains of scraps growing in our pristine backyards just like Peng, Kun, and Yi Jie see everyday. China’s decision to focus on domestic recycling in an effort to clean up their own landfills is a slap in the face to our First World consumer culture. It forces us to re-examine our waste habits and confront the reality that every time we throw out our beloved Tim Horton’s coffee cups, we are poisoning our environment at an alarming rate.

A deliberate shift in consumption will not happen overnight. In 2016, the Ontario government released its Strategy for a Waste-Free Ontario, diverting our wasteful ways towards a completely circular economy (zero-waste) by 2050. This ambitious plan requires the full participation of producers to consumers and is an inspirational idea, though I hadn’t even heard of it before digging through plastic research, and it doesn’t seem to be very widely discussed.

Either the government is already losing faith in the reality of its implementation, or it needs a bigger budget for advertising.

As research on plastic and its detriments on the environment increasingly pop up on our news feeds, it’s obvious that we’ve reached a breaking point. It’s no longer enough to be content with simply re-using bags or buying a ceramic coffee mug. It is imperative that we completely eliminate unnecessary plastics, and that can only be achieved by radically changing our habits and becoming conscious of the environment with everything we do and everything we buy.

This change will not be easy, but it must be done. We all must initiate a seismic cultural shift that sees a serious slowing down of our relentless consumerism. Our current pattern of manufacture, consume, discard is creating a chain of exploitation; it exploits the workers making our products, it exploits us through merciless advertising; and it exploits millions of poverty-stricken laborers working for a pittance like Kun and Peng in Plastic China.

We desperately need large-scale investment into domestic recycling plants paired with less garbage being tossed aside every day by us, the ones who buy and discard, day in and day out. If we do nothing and continue to turn our beautiful world into a Wall-E-esque nightmare, then the fate of our civilization will be suicide by garbage.