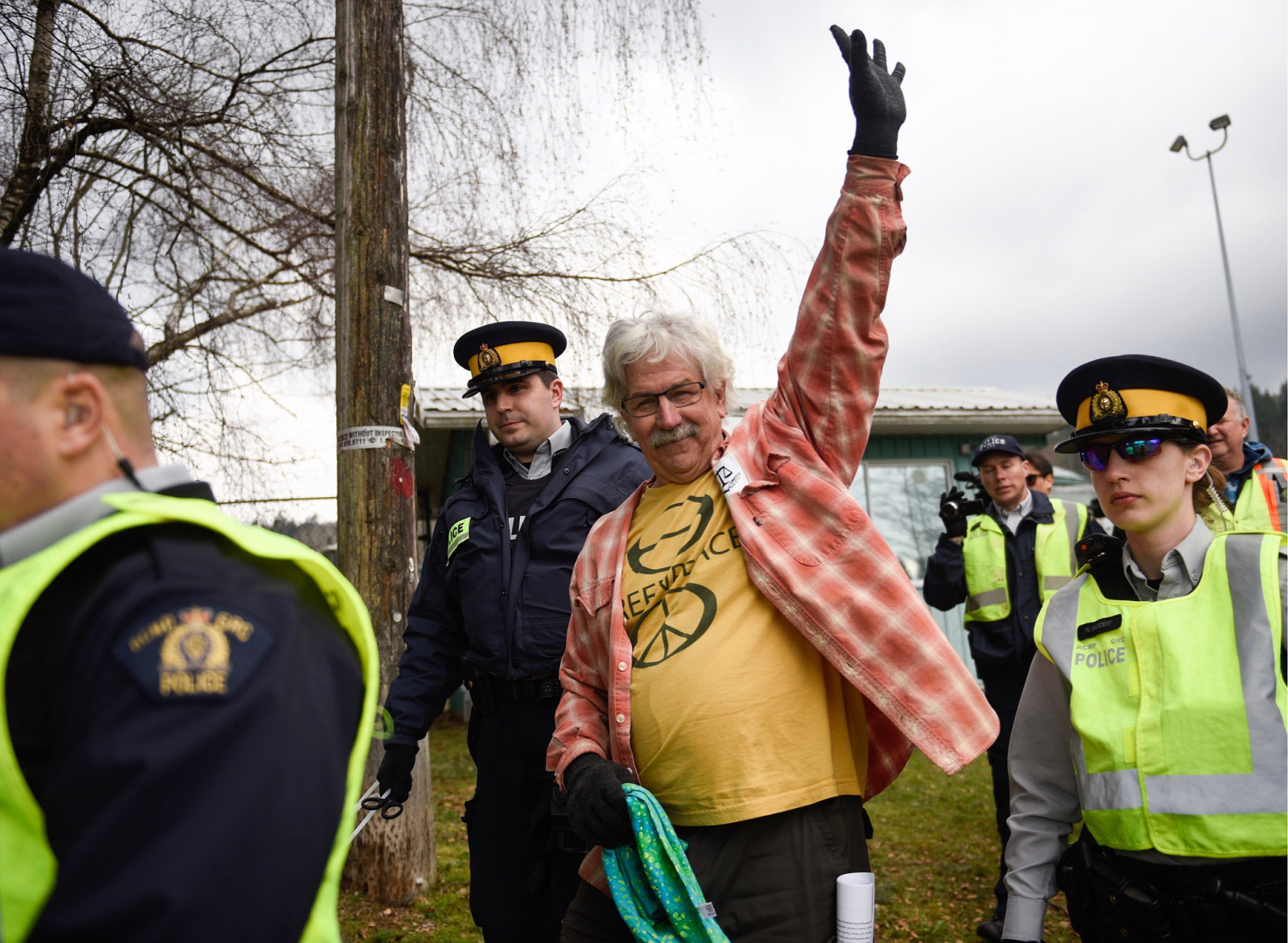 Protesters staged a sit-in at the gate of Kinder Morgan's Burnaby terminal today, continuing the protest over the Kinder Morgan pipeline expansion. At about 10 a.m., Burnaby RCMP responded and set up a cordon to process detained protesters. Three hours later, they made their first arrests.

“This is an international profit making business to ship tar sands to refineries in Texas and refineries in China… for a few extra dollars,” he said. “Instead of building refineries in Alberta, they want to ship it out here, and turn this harbour, Burrard Inlet, into a shipping port for the tar sands. And the people of this area have said no.”

Last week, a B.C. judge issued a permanent injunction protecting the pipeline’s construction. On Saturday, 28 people were arrested and released for violating the injunction and staging a sit-in at the Burnaby Mountain site to oppose the Trans Mountain pipeline expansion.

Kinder Morgan's Trans Mountain pipeline expansion was approved by the federal government in November 2016, but is opposed by the current NDP government in B.C., and has faced a court challenge from six First Nations, the City of Vancouver and City of Burnaby.

If built, the Trans Mountain expansion would triple the capacity of an existing pipeline network, allowing it to carry up to 890,000 barrels per day of crude oil from Alberta, home to the world's third largest reserves of oil after Saudi Arabia and Venezuela, to the west coast. Supporters of the project say it will promote jobs and growth in the oilpatch, while its detractors say it will lead to spills and push Canada's climate change goals out of reach.

Kinder Morgan commented that it notified the RCMP because the protest "created safety issues for our workers, the surrounding area, and the protesters themselves."

"We respect the right to peacefully protest and there are many ways to express opinions in a safe and lawful manner," Kinder Morgan commented to National Observer.

"Some individuals have been regularly attempting to obstruct, impede and prevent work crews and equipment from entering our operations facilities and worksites, which is why we pursued, and were granted, an injunction in BC Supreme Court. Opinions about our Project must respect the terms of the injunction that is currently in place. As always, the safety of the community, workers and our pipeline system is Trans Mountain’s top priority."

After his brief arrest, Weyler told National Observer that protesters are not intimidated by the police and will return.

“It’s going to go on forever until we stop this thing,” he said. “I know the majority of the public in this region are opposed to this project. Someone told me percent of this community are willing to protest and get arrested. That’s hundreds of thousands of people… we have a really good chance of stopping this project just because the system can’t process that many people.”

“It’s going to go on forever until we stop this thing,” Greenpeace co-founder Rex Weyler said.

He also commented that the police have been “really great, treating everybody well. “

Shortly after Weyler and his colleagues were arrested, three others zip-tied themselves to the fence to replace them.

Editor's note: the headline was updated at 4:55 p.m. PT to reflect that Rex Weyler was arrested near Kinder Morgans' Westridge marine terminal in Burnaby.

Many thanks, Rex. Again.

Many thanks, Rex. Again.

Rex is absolutely right. You

Rex is absolutely right. You want to create jobs? Build refineries in Alberta. Supply Canada with Alberta oil. We are repeating the exact same idiotic policies as we did when we shipped our ancient forests to China in the form of raw logs and bought it all back at a premium after they processed and created products with it. Where is the strategic thinking here????