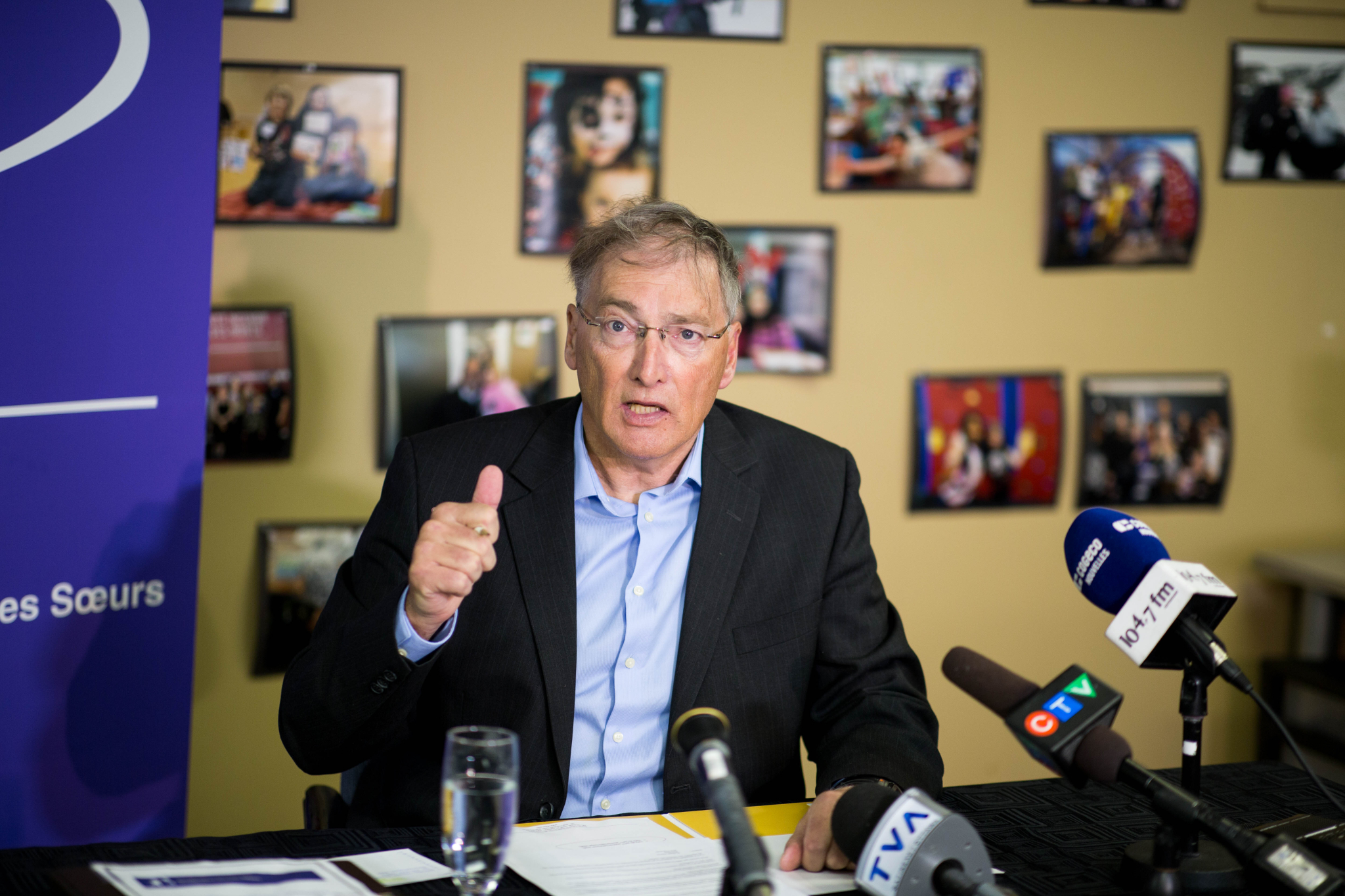 Richard Gravel, chairman of the Gatineau chapter of Big Brothers, Big Sisters, speaks to reporters at his organization's office on March 20, 2018. Photo by Alex Tétreault
Previous story
Next story

The man presiding over a charity at the centre of a gathering storm about press freedom in Canada is defending his board’s decision to keep the woman who had ignited that storm on staff.

Richard Gravel has been the volunteer chairman of the board of directors of Big Brothers, Big Sisters chapter in Gatineau for less than two weeks, following an exodus of more than half of its board members including his predecessor, Radio-Canada reported.

He was forced to come out and face reporters at a news conference on Tuesday in Gatineau to respond to the controversy provoked over the Radio-Canada investigation that led to the arrest of a reporter who asked his director, Yvonne Dubé, for an interview about her history of legal trouble.

Dubé helped turn the controversy from a local story into national news after she approached police and filed a complaint alleging that the reporter investigating her past was criminally harassing her. The journalist, Antoine Trépanier, reported that she had practiced law and represented clients without a licence, an allegation she denied. He also reported that an Ontario Superior Court justice, Charles Hackland, had issued an order which banned her from practising law without a licence in April 2015, something she confirmed during one of her conversations with Trépanier.

Trépanier's bosses at Radio-Canada said he acted ethically and legally to seek comments from Dubé about the allegations against her. But police in Gatineau called Trépanier during the evening of March 13, after Dubé filed her complaint, to tell him that he should report to the police station because he was under arrest.

Gravel told media Tuesday from the charity's Gatineau office that the new board held an emergency meeting, reviewed the situation and decided that Dubé’s work — the charity credits her for boosting revenues by over half a million dollars — meant it was worth keeping her around.

“I met Madame Dubé and I asked her to pull out the financials. I asked her if I could meet with personnel. I asked to meet with the board of directors to see who was there, and if the atmosphere was healthy or not and if there were any barriers and things like that,” he said. “After two months, I took a decision.”

Trépanier was arrested but not charged. Gatineau police said it was up to the Crown, Quebec's director of criminal and penal prosecutions, whether to file charges. A spokesman for the director said Monday the Crown has not yet decided.

The reporter has promised to appear in court in June — but the incident has prompted criticism that freedom of the press was harmed in his arrest, including a condemnation of the arrest from the Canadian Association of Journalists. Gatineau police director Mario Harel has defended his department's decision.

Gravel skated around questions about what would happen if the Crown drops the case against Trépanier, or if Dubé gets charged with mischief for making false accusations. “We’ll see when we get there. I can’t start talking about the future. I won’t make predictions about the future,” he said.

He said he didn’t think Dubé’s situation has affected the charity’s reputation, because its mission is to help children. And he avoided answering directly when he was asked if the board’s judgment would be called into question if Dubé ends up being charged with mischief.

“When we’ll be four or five months down the road and another decision comes, we’ll have another emergency meeting and we’ll take a decision.”

One of the board members who resigned, former vice-president Pierre Samson, said he tried to install committees including on ethics and prepare audited statements, Radio-Canada reported — but Dubé told him controls were already in place. National Observer has not verified the allegations against Dubé independently.

Gravel said he couldn’t speak for Samson, but that when he arrived, before becoming chairman, he asked to see how the organization worked, including its financial records and activities.

“After that I wanted to meet with the board of directors as an observer to see what kind of atmosphere there was on the board,” he said. “Was it a healthy environment? Or was it a friendly atmosphere with everyone wanting to go in the same direction? And the answer was yes.”

He tapped a large binder sitting in front of him, saying the audited statements were there for anyone to see. As for the board resignations, he said he couldn’t comment on what happened in the past.

“If there was infighting — it happens from time to time that there are disagreements on boards for small things, big things — it’s not my place to comment on things like that,” he said.

“They’re very happy. The new members are happy. So there is excellent chemistry and we’re moving forward.”

Dubé was not present at the press conference. Gravel said she didn’t want to speak, due to the Crown’s investigation being underway.

He said he didn’t even ask her to come. Asked repeatedly why the organization did not insist that she speak for herself, Gravel said it was “because I’m the one representing the board of directors and the organization.”

During his investigation, Trépanier had offered Dubé an interview, but after accepting she declined at the last moment, Radio-Canada reported. The reporter then reiterated the interview offer the next day, at which point Dubé contacted the police “alleging that she was being threatened by a man,” according to a police statement.

Gravel was asked if he himself would have complained to police about a reporter calling twice.

“I know the media,” answered Gravel, who ran for mayor of Gatineau in 2009 but was defeated. “Some people don’t have experience in that. Some people have different sensitivities.”