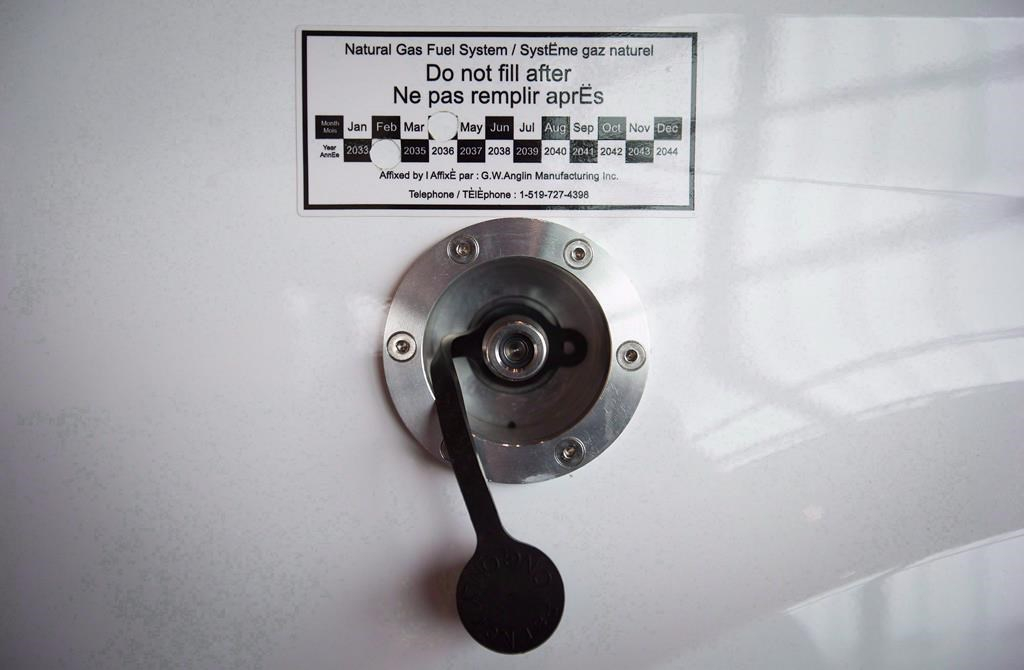 A natural gas refuelling port is seen on a vehicle at the Vancouver Board of Trade energy forum, in Vancouver in an October 8, 2014, file photo. File photo by The Canadian Press/Darryl Dyck
Previous story
Next story

B.C. government tax incentives aimed at jump-starting the much-delayed West Coast LNG industry are being welcomed by Western Canada's hard-hit natural gas industry as a potential path to higher prices and better markets for their products.

The government said Thursday it hopes its moves will result in a positive investment decision later this year for the $40-billion LNG Canada liquefied natural gas export terminal, pipelines and infrastructure which was delayed in 2016 by proponents led by Royal Dutch Shell.

"I'm pleased because it shows the B.C. government is being proactive and has come forward with some inducements for the project," said CEO Dale Shwed of Calgary-based Crew Energy Inc., which produces liquids-rich natural gas in northeastern B.C.

"We need other routes to get hydrocarbons, both oil and natural gas, out of the country and that would be a big step. And once that first step is taken, hopefully others would follow. So it's very meaningful."

He said Friday he remains cautious about LNG prospects, pointing out that LNG Canada is still looking for relief from federal tariffs on fabricated steel modules it needs to import from Asia and adding Shell could still choose to build somewhere other than Canada.

Canadian Natural Resources Ltd., one of Canada's largest natural gas producers, said in a statement Friday it is also encouraged by B.C.'s commitment to build its LNG industry.

The natural gas investing community has been abuzz with LNG news since the announcement, said CIBC analysts in a report.

"The general consensus seems to be that an FID (final investment decision) by Shell would be positive for sentiment, if not necessarily result in any material near-term shift to Canadian natural gas supply/demand fundamentals," they wrote.

Investors are now analysing where the Shell facility would get the gas it will need to generate 13 million tonnes of LNG per year from the first two of four planned "trains" or LNG units, which could be on stream in 2024 if construction starts this year, it added.

Thursday's announcement will provide a fair return for B.C. gas, create jobs, make partners of First Nations and protect the province's air, land and water, said the Canadian Association of Petroleum Producers in a news release.

“The global window to build LNG is closing, but these changes will help get Canada into the game," said CAPP CEO Tim McMillan.

"These changes will help ensure a level playing field for LNG proponents competing against other jurisdictions around the world.”

The western Canadian natural gas business remains in a deep funk due to low prices and tight pipeline capacity, according to a National Bank of Canada Financial Markets report issued earlier this week.

Transmission expansion projects won't kick in to allow meaningful growth until after 2020, it says, and prices are expected to remain low enough to discourage exploration spending in the meantime.

Meanwhile, the U.S. gas supply, up 15 billion cubic feet per day since 2010, is expected to grow by another seven bcf/d this year, which the analysts say will likely lead to more marginally profitable Canadian gas being displaced from its traditional markets in Canada and the U.S.