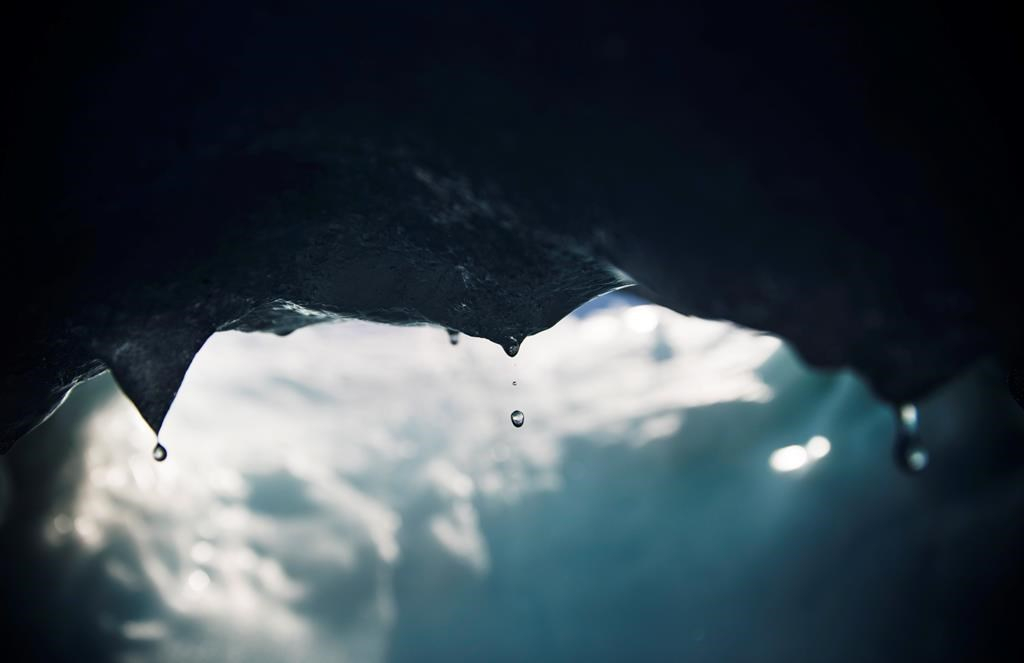 Drops of water fall off an iceberg melting in the Nuup Kangerlua Fjord near Nuuk in southwestern Greenland, on Tuesday, Aug. 1, 2017. File photo by The Associated Press/David Goldman
Previous story
Next story

More than four in 10 Canadians surveyed about climate change last month said there is conclusive evidence climate change is real, that it is being caused by people and that they believe addressing the problem should be a top government priority.

However, even among this group — labelled by the Ecofiscal Commission as "climate believers" — only two-thirds see a carbon price as the best way to curb greenhouse gas emissions, and fewer than half of them express confidence that they even know what carbon pricing actually is.

And even in provinces that already have a carbon price, more than half of respondents said they weren't aware of its existence.

The survey, done for the commission by Abacus Data, suggests to Ecofiscal's chair Chris Ragan that governments have so far done a poor job communicating carbon-price policies to the public.

Ragan and the commission have written a 36-page explanation of carbon pricing that's being released today along with the survey, conducted in February with 2,250 respondents from the polling firm's panel of online participants.

The polling industry's professional body, the Marketing Research and Intelligence Association, says online surveys cannot be assigned a margin of error as they are not random and therefore are not necessarily representative of the whole population.

"There's a lot of people who just don't understand how (carbon pricing) is either supposed to work or how it does work, so that's why we're writing this paper," Ragan said.

What is clear, said Ragan, is that among those who believe in climate change and lowering emissions, they consider carbon pricing the best way to do it from an economic point of view.

During a parliamentary committee appearance last month, Environment Minister Catherine McKenna was unable to say by how much emissions could be cut by a carbon price.

That prompted Conservative environment critic Ed Fast to argue the government was imposing carbon pricing without proof it would have the desired impact.

Ragan, who watched some of that exchange, called it another opportunity lost for the government to explain the benefits of carbon pricing.

"It was not good messaging," he said.

Ragan said there is modelling to show emissions are lowered when people or companies are made to pay for what they emit, either through a direct tax on carbon emissions or a cap-and-trade system that limits emissions and makes companies pay to emit more than they allowed.

"The bottom line is that they all put a price on (greenhouse gas) emissions, which creates an incentive to produce fewer of them," the report says, likening the philosophy to that of using tobacco taxes to curb smoking.

The paper looks at research that studied existing carbon prices in British Columbia, California and parts of Europe and concluded they were generally successful in changing people's behaviour.

In B.C., gas consumption fell in the five years after the carbon price was introduced, rising again in 2013 when the price was frozen in place. In Denmark, a 10 per cent increase in the price of fuel saw the average driver cut their driving time by three per cent.

Carbon pricing in the United Kingdom helped that country push to close coal-fired power plants, although the paper notes that the U.K. now imports more power — some of it from places that still mostly use coal, such as the Netherlands.

Emissions in B.C. are five to 15 per cent lower with the carbon price, the report concludes.

The Ecofiscal report also says economic growth was not hurt by the introduction of a carbon price, with growth in B.C. and California outpacing national numbers in the years after it was put in place.

The survey also found those who reported a left-wing leaning or who voted Liberal or NDP in the last federal election were more likely than their conservative counterparts to say climate change is real and caused by human behaviour.

The bottom line, said Ragan, is that for those who want curb emissions, carbon pricing is the most economically prudent course of action.

"Our message is if you want to reduce emissions, and every government in the country has said they want to, then this is the best way to do it."

"There are three kinds of

"There are three kinds of falsehoods: lies, damned lies, and statistics." - Benjamin Disraeli

While the argument in the article may have some validity, the statistics are utter garbage. First objection: the biased language "...more than 4 of 10..." versus "...less than 2/3...". It is a good thing the author can use language to make his point when his statistics don't support his argument: almost 2/3 of the "climate believer" respondents believe carbon pricing is the best way forward. That is twice as many as all the other considered options combined (being the remaining 1/3). Second and most importantly, an online polling pool is not random so its not just that you can't assign a margin of error, you can't meaningfully extrapolate it to any broader population. The results are what they are, but you can't extrapolate them to "all climate believers" or to "everyone who answers online polls".