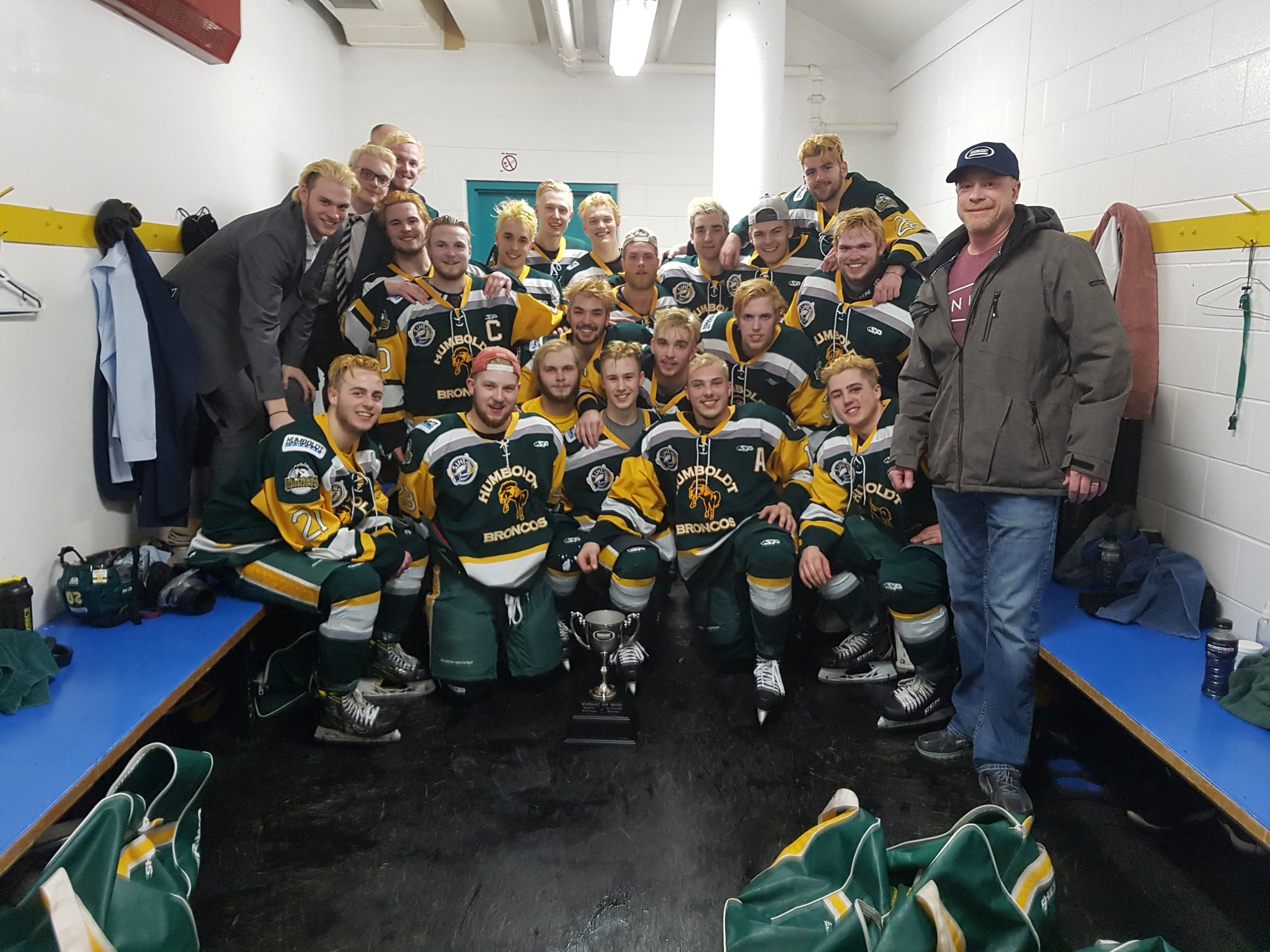 The Humboldt Broncos junior hockey team poses for a team photo in Saskatchewan on March 24, 2018 a few weeks before the team was involved in a tragic bus accident on April 6. Twitter photo
Previous story
Next story

The captain of the Humboldt Broncos hockey team is among 14 dead following a horrific bus crash in Saskatchewan.

Logan Schatz died along with head coach Darcy Haugan when the junior hockey team's bus collided with a truck on the way to a playoff game in northeastern Saskatchewan Friday.

Kelly Schatz, Logan's father, says his 20-year-old son played for the Broncos for just over four years and had served as team captain for the past two-and-a-half years.

He says the family is seeking solace in one another.

"It's hard," Kelly Schatz said. "I've got four other kids and they're here, which is nice."

Haugan's wife, Christina George-Haugan, confirmed his death to The Canadian Press. Tributes poured in online for father of two who was described as an amazing mentor to young players.

"He will always be a great man in our hearts," his sister posted on Twitter under the name Debbie Jayne. "The tears just keep coming.

https://t.co/ZktI5WOLsj Here is a statement from our team president.

The team was on its way to play in Game 5 of a semi-final playoff game against the Nipawin Hawks.

Darren Opp, president of the Hawks, said a semi T-boned the players' bus.

On Saturday morning, Nipawin was quiet. A church which had been a place for families to gather while they awaited news of their loved ones was deserted, as was Centennial Arena, home of the Hawks.

Meanwhile, offers of help are pouring in for families of team members.

The mother of former NHLer Colby Armstrong tweeted that families could contact her if they needed a place to stay in Saskatoon.

Hockey teams and players from leagues across North America tweeted messages of support, many with the hashtag #prayersforhumboldt.

"I cannot imagine what these parents are going through, and my heart goes out to everyone affected by this terrible tragedy, in the Humboldt community and beyond," Prime Minister Justin Trudeau wrote on Twitter late Friday.

In a separate statement, Trudeau said the entire country was in shock and mourning over the tragedy.

"We are heartbroken knowing many of those we lost had their entire lives in front of them. We grieve with those facing news no parent or family should ever have to face. And our hearts go out to the community that has lost teammates, coaches, friends, and mentors," Trudeau said.

"This is every parent's worst nightmare. No one should ever have to see their child leave to play the sport they love and never come back.

"Our national hockey family is a close one, with roots in almost every town - small and big - across Canada. Humboldt is no exception, and today the country and the entire hockey community stands with you."

The prime minister also thanked first responders, including the RCMP and medical staff for their efforts.

"To the entire Humboldt community: We are here for you. As neighbours, as friends, and as Canadians, we grieve alongside you."

Messages of sympathy also came in from around the world, including the NHL and U.S. President Donald Trump, who reached out to Trudeau with a phone call to offer his condolences.

Saskatchewan Premier Scott Moe also expressed his condolences to the team members and their families.

"Words can not describe the loss that we feel tonight," Moe wrote on Twitter. "From a grieving province, thank you to first responders & medical professionals for courageous response under the most difficult circumstances imaginable."

I cannot imagine what these parents are going through, and my heart goes out to everyone affected by this terrible tragedy, in the Humboldt community and beyond. https://t.co/2cIn2CTy08

Words can not describe the loss that we feel tonight.

From a grieving province, thank you to first responders & medical professionals for courageous response under the most difficult circumstances imaginable.

Tonight, we all must pray for these families.https://t.co/dEnhKMkDxJ

Hundreds of people gathered Friday night at the Apostolic Church in Nipawin, waiting for information.

Broncos president Kevin Garinger says the Saskatchewan Junior Hockey League team includes players from Edmonton, Slave Lake and Airdrie in Alberta and from Saskatchewan and Manitoba. Garinger said the Broncos are a close-knit team from the small city of about 6,000 people 110 kilometres east of Saskatoon.