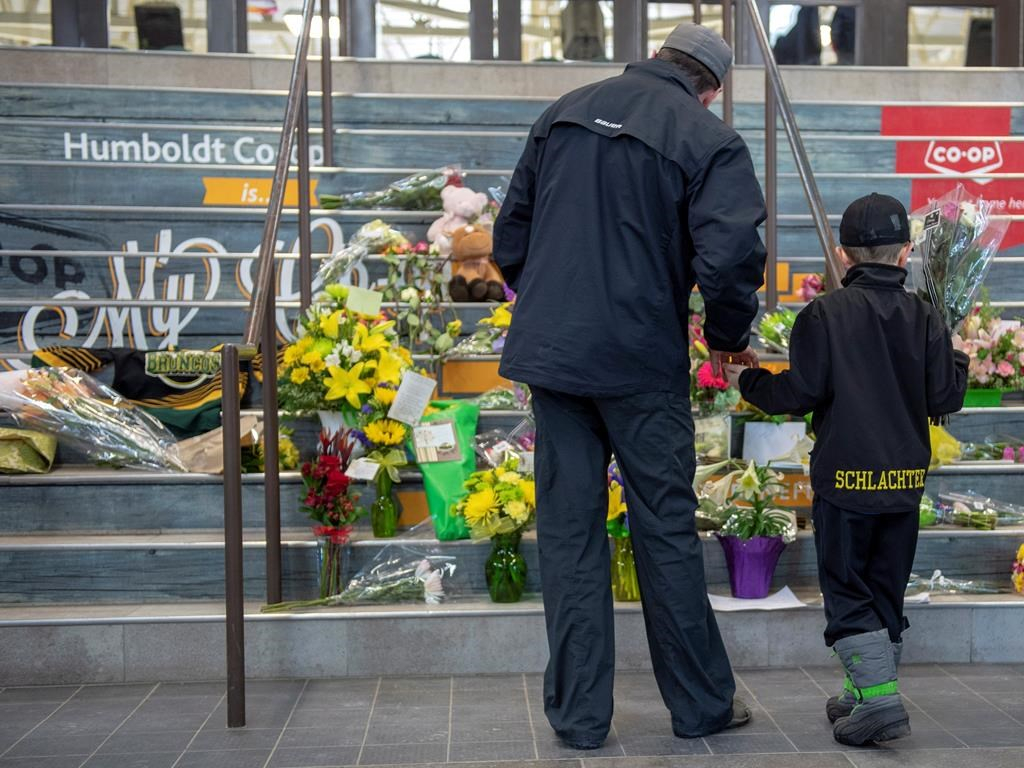 Locals pay their respects on April 8, 2018 to victims of a horrific bus crash involving the Humboldt Broncos that claimed the lives of more than a dozen people on a Saskatchewan highway. Photo by The Canadian Press
Previous story
Next story

Family and friends of 15 lives lost in the Humboldt Broncos bus crash shared more stories Sunday of tears, fond memories, and unbreakable bonds forged by a love of hockey.

While a vigil was set for Sunday night at the junior hockey team's home arena, more names were confirmed of those killed early Friday evening at an east-central Saskatchewan highway intersection in a collision with a tractor-trailer.

Scott Thomas remembered his 18-year-old son as a strong athlete — playing both hockey and baseball — and a good student. But he was a teammate first.

"He liked sports, but at times I think he tolerated sports so he could be a teammate," said Thomas. "He just loved being a teammate. He loved his teammates and I think that was more important to him than the actual sport he was playing.

Thomas said that before Christmas he spoke with the team's head coach, Darcy Haugan, who was also killed in the crash, about whether there would be any trades for the second half of the season.

"Darcy just said, 'You know, Scott, there's something about this group of kids that's special,'" he recalled. "He didn't want to make any changes because they are such a great group of kids."

Boulet's cousin Julie Kindt said on Facebook that Boulet, 21, had been on life support until his organs could be donated.

"He was a great kid who really loved his family and hockey," his uncle Daniel Boulet also wrote on Facebook.

Assistant coach Chris Beaudry was driving his own vehicle to the game the night of the crash. He described his colleague, Mark Cross, as one of the happiest people he had ever met. Cross was from Strasbourg, Sask., where he played hockey before joining the Broncos' coaching staff.

"His first game, we found a tin of mints and ever since then it's been alternating back and forth, buying mints for each other and sharing it as a joke. We'd end up going through a whole tin every game," said Beaudry.

Beaudry visited some of the 14 injured in a Saskatoon hospital Sunday. One of the wounded had already been released.

Those being remembered also include 18-year-old Hinz. Golden West Radio said in a statement that the stats recorder was being mentored by Tyler Bieber, the team's play-by-play announcer, who was also killed in the crash. Another company statement described Hinz as an intern still in high school.

The manager of Herold's previous team, the Regina Pat Canadians, confirmed his death. The defenceman would have turned 17 on Thursday. John Smith said Herold played for the Canadians until just a few weeks ago and, when their season wrapped up, he was sent to the Broncos for their playoff round.

"Best friends, teammates, allies, brothers," he wrote. "We've been through so much together. We had a special bond from the day you were born."

Leicht, 19, was remembered for his laugh and bright smile. A family member posted on Facebook that her heart is broken.

"Your laughter is so contagious and you had a smile that lit up any room," Cassidy Tolley wrote in her public post.

Doerksen's employer, Charlie's Charters, posted about the driver's death on Facebook. Another team he drove for, the Kinistino Tigers, also issued a statement.

"In talking to him, he spoke at length of his time in rinks with his own family and now how much he enjoyed being able to take and watch other teams from minor, to senior to SJHL to their hockey games," a spokesperson for the Tigers wrote on Facebook.

"We will never forget the smile on your face as we left Allan after winning the championship and got you to give 'two honks for the cup,'" they wrote.

Team president Kevin Garinger said the hockey team will do everything in its power to get back on the ice in the future.

He said more than $3 million has been raised since the crash and the money will go to the survivors and the families of the dead.

The intersection in east-central Saskatchewan where the crash happened reopened to traffic shortly before noon on Sunday.

RCMP officers from Nipawin, Sask., stopped to lay flowers there on behalf of the detachment. The Broncos had been heading to Nipawin for a playoff game when the crash happened.

While the wreckage had been removed, there were still playing cards and a broken DVD of the movie "Slap Shot" scattered in the ditch. The Hanson brothers, popular characters in the movie, tweeted condolences to the Broncos on the weekend, as did other celebrities.

The Queen also issued a statement.

"Prince Philip and I were saddened to hear word of the crash," she said. "Our thoughts and prayers are with those who have lost so much, with their families and with all Canadians who grieve with them at this difficult time."

Pews were packed Sunday morning at the St. Augustine Catholic Church in Humboldt, where Rev. Joseph Salish told parishioners that if they feel like crying, they should.

"Our lives will never be the same again," he said.

At a church breakfast Sunday morning, Frieda and Herman Bauir said the Broncos are the community's entertainment in the long winters and it's a pleasure to go to their games.

"Humboldt is a hockey town. So they meant a lot to us," Herman Bauir said.

"They were part of the community."

— With files from Chris Purdy, Colette Derworiz and Jonathan Hayward