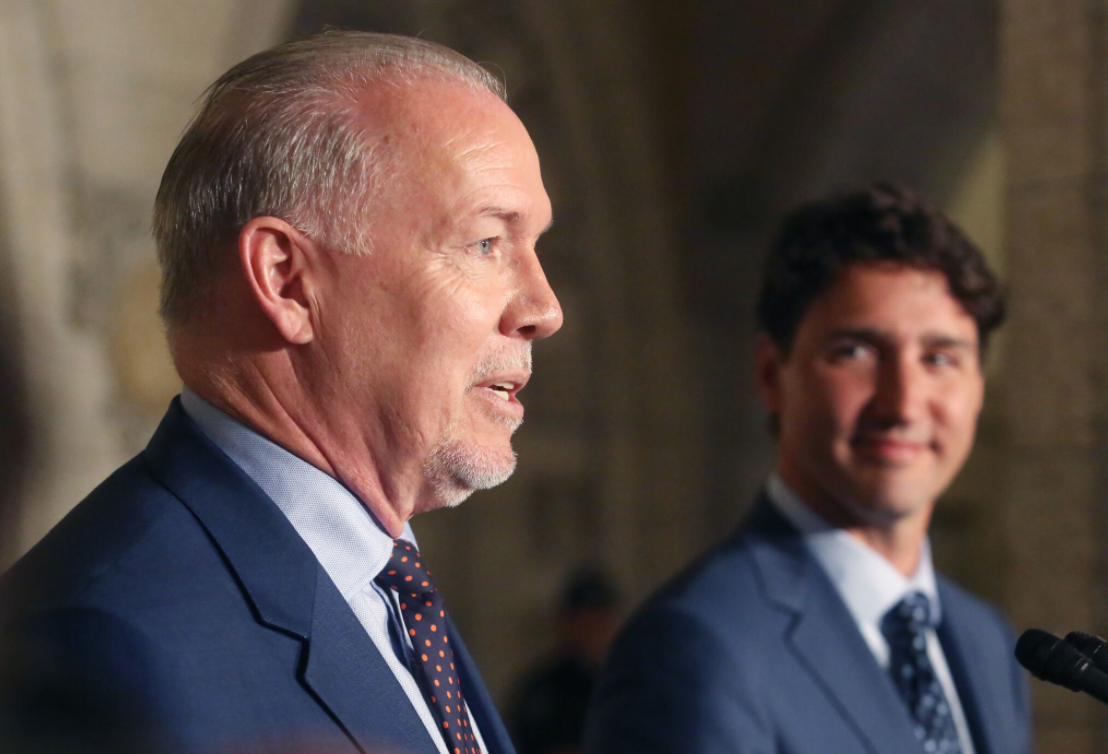 British Columbia Premier John Horgan showed no signs Monday of backing down on the battle over the Kinder Morgan pipeline, rejecting widespread claims his government's challenge of the $7.4 billion project is hurting the economy and tearing apart the country.

His tone ran from calm to exasperated during a 30-minute question period in the legislature where the Opposition Liberals accused his government of hurting investor confidence, ignoring the rule of law and picking an unwinnable fight with Alberta and the federal government.

"One investment project does not an economy make," said Horgan, adding B.C. has the lowest jobless rate in Canada and a solid credit rating.

Kinder Morgan announced Sunday it was stopping all non-essential spending on the Trans Mountain pipeline expansion project, saying opposition from the B.C. government puts the project at risk. It has set a deadline of May 31 for talks with various stakeholders to reach an agreement that could allow the project to proceed.

"All of a sudden when the shareholders in Texas issue a press release there's a constitutional crisis," Horgan said.

The government announced in February that it will ask the court to decided if it has the right to protect its environment by restricting diluted bitumen in the Trans Mountain pipeline. The decisions to refer the matter to the courts prompted Alberta to suspend a ban on wine imports from B.C.

"What we're talking about here is the province of B.C. going to court to assert our jurisdiction and protect the interests of British Columbians," Horgan told the legislature. "We said in an election campaign a year ago this is what we would do."

He said B.C. is in court to defend its coast and its interests from a project that will triple bitumen shipments from Alberta to Burnaby and increase tanker traffic seven-fold in B.C. waters.

Horgan said he spoke with Prime Minister Justin Trudeau and Alberta Premier Rachel Notley on Sunday and told both leaders to build more oil refineries instead of pipelines.

"That would be leadership," he said.

Notley said Monday she told Horgan in a telephone call that B.C.'s opposition to the pipeline threatens the rule of law in Canada and she made it clear her province will retaliate.

Notley said she will introduce legislation this week to give Alberta the power to reduce oil flows to B.C., which could send gas prices in the province soaring.

"The premier stands alone in his opinions," he told the legislature. "Is this burgeoning fiasco his definition of success?"

Wilkinson urged Horgan to meet with the prime minister to resolve the dispute and ensure certainty for the federally-approved project.

Greg D'Avignon, president of the B.C. Business Council, said the government's decision to prolong the process threatens the credibility of the country's regulatory and project approval systems.

British Columbia's Chamber of Commerce said the implications of the decision by Kinder Morgan are "seismic," and if this project can't be built it will show the world that government approvals count for nothing.

Opposition to the pipeline has ramped up in recent weeks, with several dozen people arrested near the Burnaby marine terminal in the last month.

Trudeau said last week in Victoria the pipeline will be built and he repeated those comments in Quebec on Monday.

Trudeau needs to push for meeting with B.C. premier on pipeline ASAP: Tories

While it's possible for one

While it's possible for one investment to make an economy, it's not the case here. There may still be a federal crisis, not because of this, but because of a long history of poor budgeting by provincial Liberal and Conservative parties across Canada (Saskatchewan should feel lucky right now). If you can't treat your people well, they can't treat you well.

Thousand of protesters, hundreds of arrests, and many court challenges from local groups. So from whom does Trudeau think he has a social license for this ill-fated project? Kinder Morgan? The real crisis is the fact that the federal government is not living up to its own election promise by not fixing the NEB process so flimsy evidence can be challenged before deciding on whether to approve this project.

"One swallow doth not a

"One swallow doth not a summer make." William Shakespeare