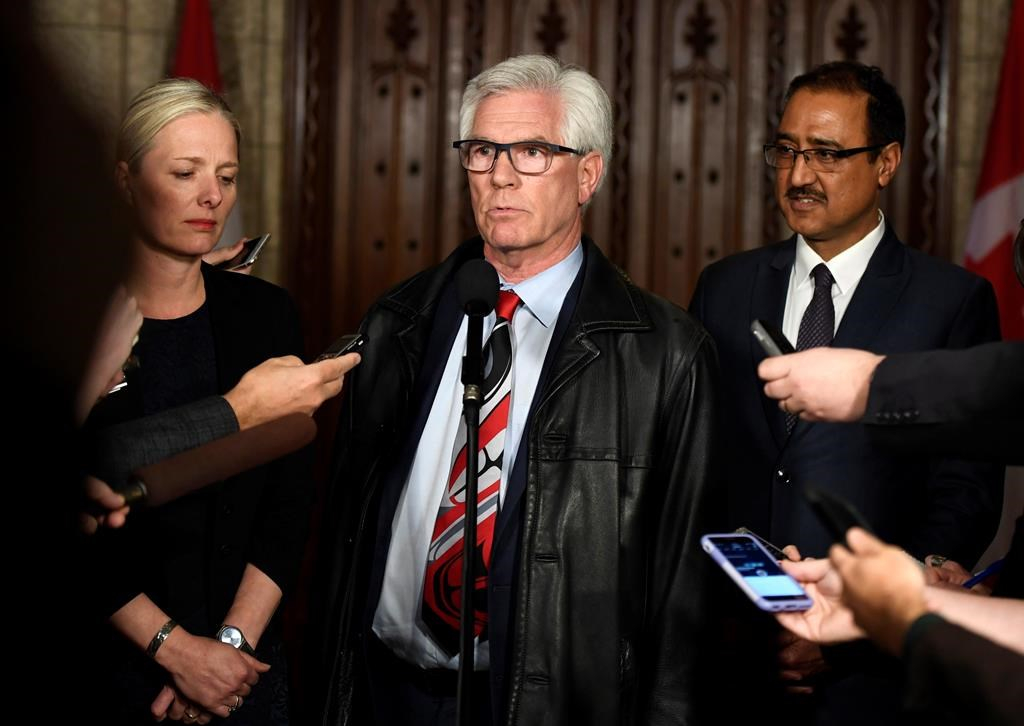 Jim Carr speaks to reporters with Catherine McKenna and Amarjeet Sohi, after an emergency cabinet meeting on Parliament Hill in Ottawa on Apr. 10, 2018. File photo by The Canadian Press/Justin Tang
Previous story
Next story

The government is still examining its options, Carr said, but won't commit to a course of action before Sunday, when Prime Minister Justin Trudeau jets home from Peru for a hastily organized meeting in Ottawa with British Columbia Premier John Horgan and Alberta Premier Rachel Notley.

"What we're now faced with is to find ways to make sure there is more certainty than there is now," Carr said in an interview with The Canadian Press.

"One of the ways to make sure there is more certainty is to look at possible financial arrangements that would help de-risk the project."

Pipeline builder Kinder Morgan has halted all non-essential spending on the project until it gets assurances from Ottawa that the issues will be resolved. The federal government has until May 31 to respond.

Trudeau has put a lot of political eggs in the Trans Mountain basket, risking political capital among climate-change activists in search of middle ground that allows for pipeline construction alongside improved environmental safeguards.

Trudeau, who is currently in Peru for the Summit of the Americas, was originally supposed to fly to Paris directly from Lima on Sunday for meetings with French President Emmanuel Macron. Instead, he'll be back in the national capital in search of a resolution to an intractable — and politically perilous — dispute.

Carr refused to discuss the specific financial options available, other than to say there are many of them on the table and they're all being considered.

One of those options, however, is to buy a stake in the pipeline, something Notley has already said Alberta would be willing to do. Canada and Alberta could jointly buy the pipeline outright, or at least a significant stake in the project.

Another option is to provide a guaranteed source of revenue for private investors if the pipeline completion date misses the target for when returns on their investments were supposed to start flowing.

The company had targeted May 31 as the make-or-break deadline to start construction if the pipeline was to hit those investment targets. That date is now the drop-dead date Kinder Morgan has given Canada to prove the company should have the confidence to move forward.

Political strategist Robin Sears, a principal at Earnscliffe Strategy Group, said another option would be to increase spending on the environmental protection side, including on improved research into preventing and mitigating the impacts of a diluted bitumen spill.

"The company has not done what it needs to have done to satisfy the people of B.C. they have taken the steps necessary to protect the environment," said Sears.

Sears said the Trudeau government has an oceans protection plan on paper, but hasn't done much if anything to put it into action.

Carr was only prepared to say Sunday's meeting between Trudeau and the premiers would be a chance for the various sides to share their positions and try and talk things out — not necessarily a day when further action would be announced.

That, said Sears, would be a bad political move.

"If they come out of that meeting on Sunday and (Trudeau) says, 'We've made good progress and I'm off to Paris,' it will cost them severely," he said.

University of British Columbia politics professor Kathryn Harrison said she doesn't know that there is a way for everyone to come out of Sunday's meeting with a win.

"They have drawn lines in the sand that are simply incompatible," said Harrison.

Trudeau and Carr have spent more than two years accusing the former Conservative government of themselves failing to build pipelines because they stacked the deck against environmental concerns, failing in the process to get the social license necessary to allow the projects to proceed.

But environmental concerns remain — including the risk of higher emissions from increased oilsands production and the environmental impact of a spill. As a result, environmentalists who helped get Trudeau elected are now doubting his commitment to the cause.

Harrison said Trudeau has staked a claim on being able to reconcile both interests, offering up the pipeline — and the resulting ability to get resources to market — as a quid pro quo to get provincial and stakeholder support for a carbon price and environmental investments.

"That was the compromise and they got pretty far with it," Harrison said, noting all provinces but Saskatchewan signed onto the climate change framework.

"We're at that point now where the trains are colliding. This is a moment of truth for Canada and a country that relies heavily on producing fossil fuels."