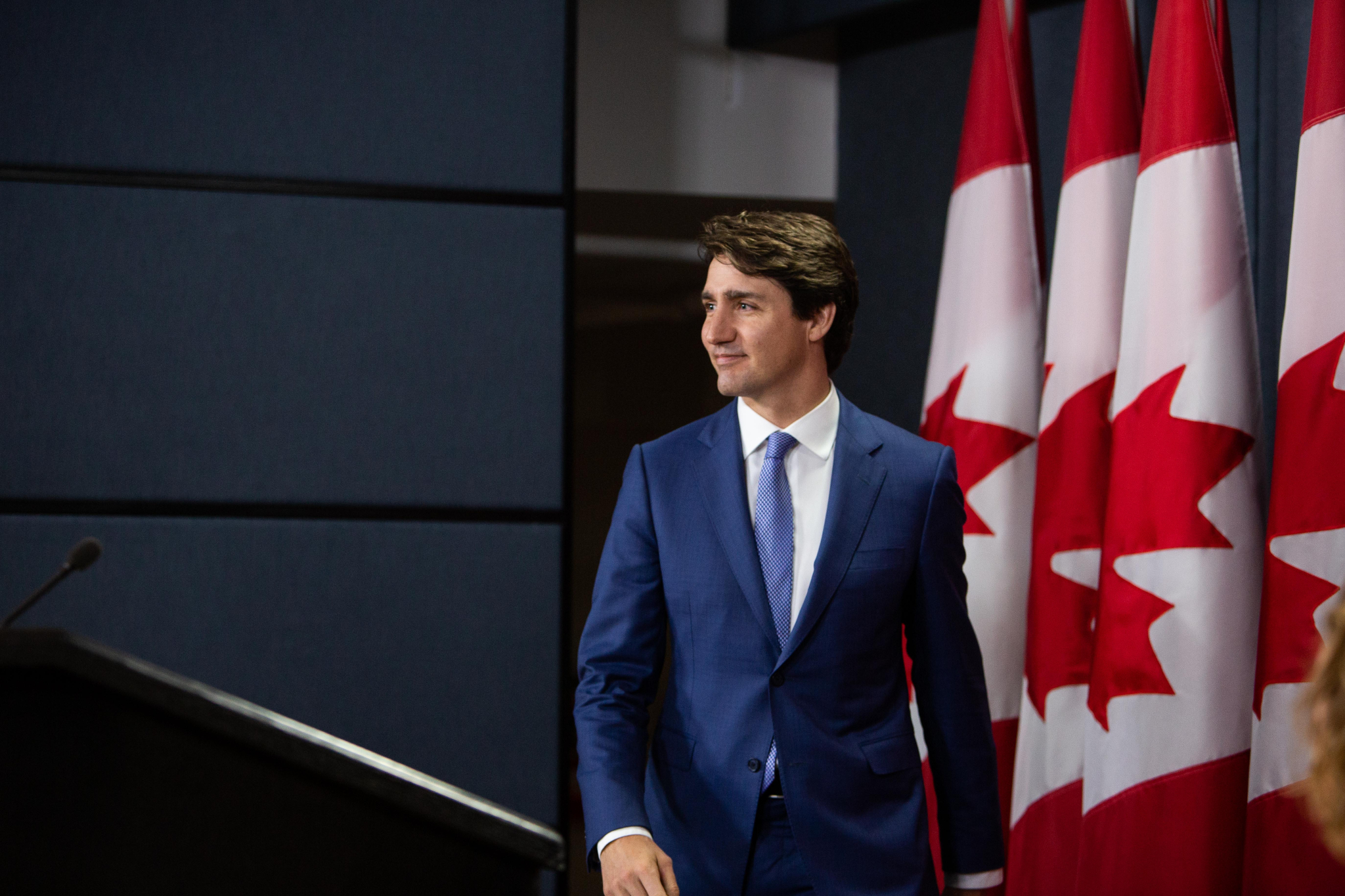 The Kinder Morgan pipeline expansion conflict reveals a much larger crisis than the “constitutional” or “investor confidence” crises constructed by the projects’ proponents. The conflict reveals a profound failure of leadership from both levels of government, but most of all, from the prime minister, in response to the true crises facing this country.

The April 15 statement of Prime Minister Justin Trudeau confirms that he has failed to grasp both the nature of Indigenous movements in this country today as well as the depth of the climate change crisis.

When Trudeau and Alberta Premier Rachel Notley speak of the “national interest” they do not speak about reducing greenhouse gas emissions or decolonization. They do not speak of climate change’s existential threats to communities across the country or the incalculable costs of climate change for future generations. Decolonization is not mentioned as a process that is central to Canadians’ national interest.

Our political leaders appear to be incapable of envisaging alternatives to the current path of dependence on carbon extraction and exports for revenue and employment. In lieu of seeking national cooperation on a plan to help Alberta phase out the oilsands while sustaining the income security and the social services its citizens need, the federal government chooses to entrench the economic and environmental status quo.

The prime minister speaks of oil industry jobs and “national prospects” as if there is no way to provide employment and income security apart from subsidizing the oil industry, putting ecosystems at ever greater risk, provoking deeper conflict with First Nations, and increasing national greenhouse gas emissions.

Tough decisions do have to be made to build an ecologically sustainable economy that meets social needs. Our governments have so far proven themselves unwilling to take such decisions.

Instead, the risks of increased carbon extraction and exports are being foisted on local environments, Indigenous communities, citizens of B.C. whose livelihoods could be decimated by oil spills, and other species who are already struggling to reproduce in the ocean and other ecosystems in the path of the pipeline.

Trudeau speaks of oil industry jobs & “national prospects” as if there is no way to provide employment and income security apart from subsidizing the oil industry, putting ecosystems at ever greater risk, provoking deeper conflict with First Nations.

The risks are displaced and socialized, while profits are protected.

The rhetoric of “reconciliation” permits Canadian governments to ignore the more radical process of decolonization. The term is employed in the sense of reconciling Indigenous peoples to ongoing colonialism. Prime Minister Trudeau and Premier Notley have referred to the secret, one-on-one agreements made between Kinder Morgan and Indigenous bands located along the route of the pipeline, and to the consultations undertaken by the federal government with First Nations prior to the approval of the TMX, as setting a benchmark of excellence for securing Indigenous consent.

In doing so, they demonstrate three things:

(It is highly questionable whether consent is "free" when isolated bands are offered the choice only of a benefit agreement or no benefit agreement, but no alternative opportunities to develop a local economy, and not the right to say "no" to a project. Moreover, the confidentiality clauses in the agreements permit the companies to divide and rule; they have the upper hand in negotiations. Finally, not all the affected Indigenous communities have consented in any fashion to the pipeline extension.)

The prime minister repeatedly states that “the economy and the environment go together.”

This is meaningless rhetoric which does not disguise the absence of a real plan—based on ecological principles—to bring private economic interests into line with ecological limits and imperatives. A plan needs to flow from national GHG emission reduction targets and job-creation, revenue, and investment targets; it needs to be cross-sectoral, coherent, and comprehensive. The federal government should be leading such a planning processes, involving all levels of government.

None of this is happening. Therefore, no one who has a firm grasp on the nature of the multiple threats to ocean ecosystems, the multiple, unfolding consequences of global warming—or, more generally, the profound conflicts between the dominant model of economic development and the survival of the ecosystems we all depend on—can take any reassurance in the prime minister’s repeated assertions. What matters is what governments do, not what they say they believe.

To take this one step further

To take this one step further, No one to my knowledge has a concrete plan to faze out of fossil fuels to a renewable energy economy in Canada or for that matter the world as a whole.
With no visible concrete plan all we can do is watch all the antics from the sideline.
Sad day for Canada and the world when government leaders can only argue for or against fossil fuels with no apparent effort to plan how we get away from the current Fossil Fuels/Climate Change debate it is all talk and no positive steps.

Brilliant. Cuts right to the

Brilliant. Cuts right to the heart of the matter. Canada, as a nation-state, is facing twin crises: its relationship to the environment and its relationship to Indigenous people. Or maybe they are, at root, one crisis, our relationship, in the deepest sense, to ourselves. In any case, our political leaders have failed both tests. I truly hope (but do not entirely believe) that they are solvable within our current political system. They sure aren't within our current economic system.

There is a third crisis -

Sale of fossil fuels = TAX $$$
So why would the feds or Alberta want to faze out this ca$h cow?

Because it's the right thing to do, not only in the National Interest, but in the World Interest.

Albertans have been so

Albertans have been so frantic about this. And it's obviously not about losing jobs--if there's no new pipeline that just means it could put a crimp in expansion of the tar patch, it won't stop anything that already exists. And so many have pointed out that overall there are more jobs (albeit less concentrated profit for billionaires) in sustainable energy. They don't want to hear it.
I think the reason is actually not economic as such at all. The point is, if we wean ourselves off oil (or even just the very dirtiest "oil" from the tar sands), Alberta won't be important any more. They won't be in a position to throw their weight around and strut as "Texas North"--they'll just be Saskatchewan with more cattle and less wheat. I think Albertans hate and fear that idea.

I think that you do not grasp

I think that you do not grasp the complexity of the problem. The Alberta premier and the prime minister are caught between a rock and a hard place. The situation cannot be fixed by the flick of a switch. Environmental projects and jobs are in the works but not fast enough to sustain enough jobs for people. I am talking about a deep recession (people without housing and starving). When people do not have jobs, they have no money to buy anything. When people cannot buy anything other people lose their jobs and so on and so on -- the true trickle down situation. It will spread through out the country and will hurt a lot of people. It is not as simple as you seem to think.

Arlene,
Green jobs are outpacing carbon based jobs. Alberta should have been transitioning 10 years ago. This was completely foreseeable. This is bad planning fully on the PC party and now the NDP in Alberta. No one will starve, this is not a tragedy. This is an opportunity to accelerate growth in the right direction. Move ALL carbon based subsidies into retraining and green projects throughout Alberta and watch the province boom. Solar all through the south? More windmills in Pincher Creek/Lethbridge areas. Geothermal in the north. These are opportunities that are being delayed by this ridiculous subservience to a Texas company for China fuel.

Thank you for so eloquently

Thank you for so eloquently putting in words the unease I feel when I heard Trudeau justify the expansion by using the national interest phrase. Intuitively I knew he was wrong but I could not explain why to others. I will be referencing this article frequently. Thanks again.

Your article is much

Your article is much appreciated. I agree with you on how our national interest should be defined and the work on decarbonization that needs to be done. Here is one source on pathways for deep decarbonization in Canada: http://deepdecarbonization.org/wp-content/uploads/2015/09/DDPP_CAN.pdf