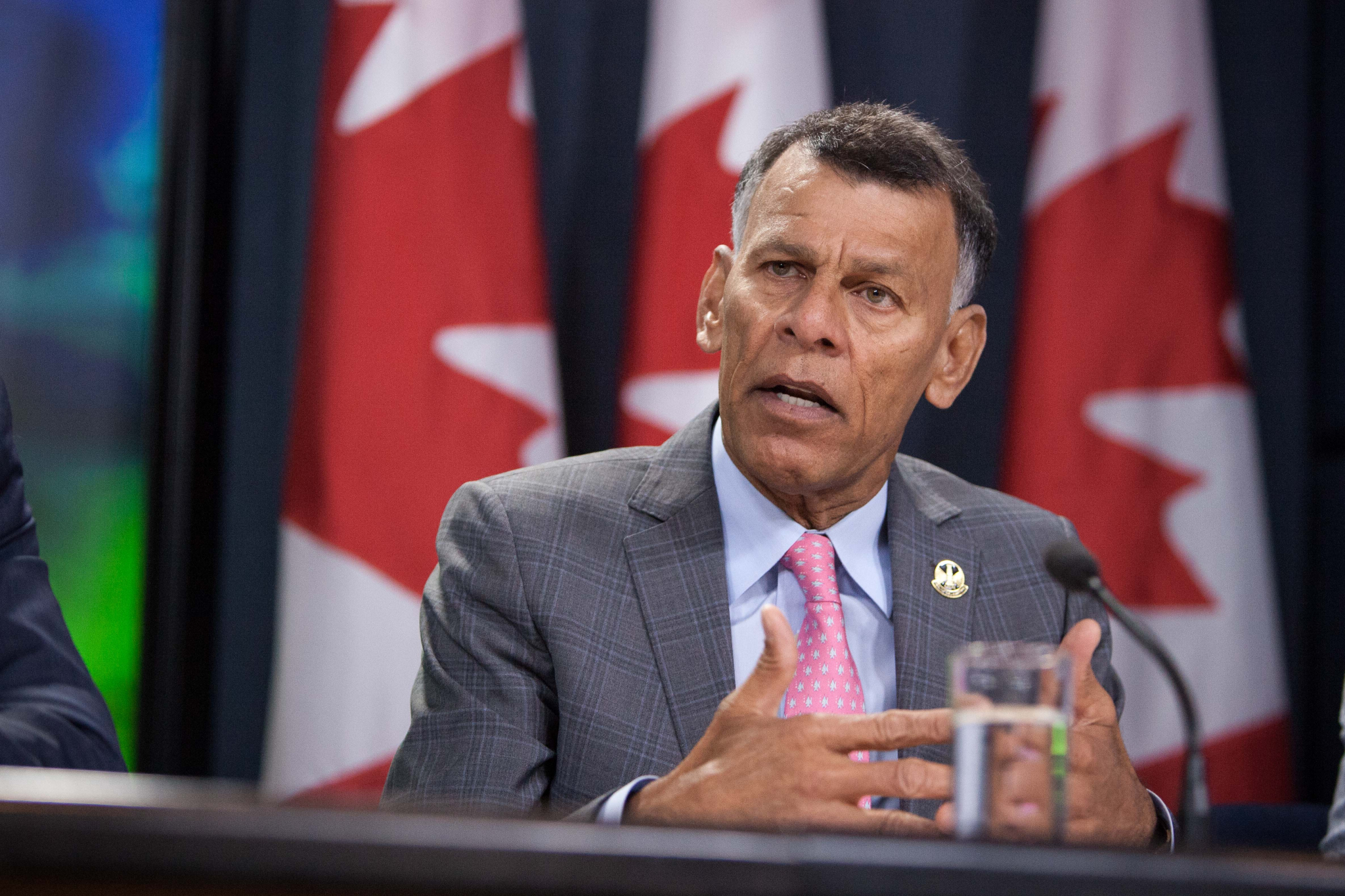 To say that Canadian labour leader Hassan Yussuff was frustrated Wednesday would be putting it politely.

“There are other adjectives I will not use," the Canadian Labour Congress president told National Observer.

He was reacting to word from labour colleagues at the international climate change conference in Bonn that the federal government has no "just transition" policies in place, as promised, for coal industry workers who will lose their jobs in the move to a cleaner environment. Notices of layoffs in the industry have already started this week in Alberta.

Yussuff, representing the umbrella group for unions across the country, spoke in an interview from Canada about the disturbing news from his colleagues in Germany following a meeting with Environment and Climate Change Minister Catherine McKenna.

Yussuff and other union leaders say that McKenna and Prime Minister Justin Trudeau promised them last year to promote a “just transition” for workers who will lose their jobs due to a phaseout of coal-fired power plants. They were also told that McKenna would be the lead minister on the file.

Such a plan would require such concrete policies as improved employment insurance benefits and training programs to help workers transition into new jobs. The labour leaders said the government also promised to create a new task force to drive the issue forward and provide solutions.

But labour union representatives said they were told this week in Bonn that the federal government had nothing yet to put on the table for the workers. All of them expressed frustration about the lack of progress on the eve of a joint Canada-United Kingdom event promoting a wider phaseout of coal around the world.

Workers in oilpatch could be next

Coal workers aren't the only ones who will be affected by efforts to reduce pollution and fight climate change. Workers in the oil and gas industries also face a transition as the world moves towards cleaner energy.

It's a particularly sensitive topic in western Canada’s oilpatch, where tens of thousands of workers have lost jobs since global oil prices plummeted in the fall of 2014.

Yussuff and other labour leaders say they fully support the government’s efforts to address climate change and reduce Canada’s carbon pollution. The science clearly shows that coal needs to be phased out, Yussuff said, because of harm to the environment from climate warming and to health from power plant pollution.

Despite predictions that emerging clean energy technologies will create millions of new jobs, the labour leaders say that the government is sabotaging its efforts to fight climate change by failing to address the needs of workers in transition.

"We’re still strong supporters of the government with regard to its climate change strategy, but you can't disregard the needs of workers and their families," Yussuff said.

"We don't want people to build resentment against (addressing) climate change. We want to build the future."

He also noted that U.S. President Donald Trump used this type of resentment from working class voters to win election and speculated that the same thing could happen to Trudeau's Liberals if they don't pay attention.

"I'm hoping that we will figure this out. But I think it has been a terrible experience for the government in this sector," Yussuff said.

The labour leaders said that workers are already reluctant to trust governments that talk about transitioning away from an industry. It gets worse when the government tells them that it doesn't have a plan, said one of the labour leaders from Alberta who is attending the Bonn climate talks.

“In order for any government to be successful with climate action initiatives, they need public support, but without fair and just transition initiatives for affected workers, they run a very big risk of losing the support that they need to keep moving forward,” said Gil McGowan, president of the Alberta Federation of Labour.

“As it stands right now, coal workers are very distrustful because the government hasn’t given them concrete answers, and they will remain distrustful until this changes.”

McKenna's spokeswoman Marie-Pascale Des Rosiers said that a transition to clean energy was the right thing to do to protect health, the economy and environment, and was in agreement that people "can’t forget the workers and families who face uncertainty as a result of this transition."

She added that the government's climate change plan makes a commitment to a just and fair transition for Canadian workers.

"That means support for the skills and training workers need to find opportunities in Canada’s clean growth economy," Des Rosiers said. "We will be launching a task force, including labour and business, to hear from workers and communities. We need the best advice we can on how to do this right for workers and coal communities.

"We’re working closely with Alberta, which has already committed to helping its coal workers and communities, to get people the support they need."

Nothing but 'pathetic excuses'

Behind the scenes, the government has told labour leaders that the matter is complicated by having multiple ministers responsible for the file such as McKenna and Employment, Workforce and Labour Minister Patty Hajdu. But Yussuff said he blames McKenna for failing to deliver on this commitment with layoffs expected to start later in the week.

"We’ve heard nothing other than pathetic excuses from her and the government about why this hasn’t been done," Yussuff said. "This commitment was made by Minister McKenna. It was her failing, not anyone else, in not seeing this through."

Alberta, which had committed to phase out dirty coal plants by 2030, has about 3,000 workers in its coal industry, including the mines, McGowan said. Its provincial government introduced its own plan last week. It includes a $40 million fund to support workers until they find new jobs or retire.

McGowan said it was good to have the plan before the layoffs begin, but he said it should have been done much sooner since companies have already started to announce closures.

Two union locals received notice this week of about 115 layoffs that would affect people working for TransAlta, McGowan said. Those layoff notices have yet to be delivered so the people affected don't know who they are.

"The government thought they had until 2030 before they needed to have just transition plans in place because that was the deadline for shutting down the plants. But now that the policy framework for a phaseout is in place, a lot of the power generation companies are making the decision to phase out much more quickly," McGowan said.

“This is a concrete example of why governments can’t (afford to) wait to get a just transition plan in place. It has to be done at the same time they’re introducing their climate action strategies like the coal phaseout. You can’t just say, ‘ok we’re going to phase out coal and then we’ll think about just transition.' That’s what they did in Alberta and that was a mistake. We barely got in under the wire.”

Catherine Abreu, executive director of Climate Action Network in Canada, an umbrella group, said that the government also needs to start making firm commitments to the international community about promoting a just transition. Canada could spell this out in negotiating commitments that it makes under the Paris agreement, but has not yet done so.

"I think Minister McKenna’s office is taking that seriously and knows that in order for it to maintain its credibility as an international climate leader, it will need to think about how its commitments need to be enhanced in that 2020 timeline. They’re open to hearing about it and I’m looking forward to having future conversations about how just transition can be a part of the ambition enhancing package for Canada."

Speaking on the sidelines of the Bonn summit, Green Party Leader Elizabeth May noted that her party has long called for federal measures to support a just transition and urged the government to take action.

Yussuff added he remains optimistic that the government can figure it out.

"I think it’s critical that we have to see a just transition," he said. "Governments are always nervous about the implications or costs of making such a commitment. But in absence of that, it leaves me as union leader to tell the government to go to hell. Unless you’re going to take care of workers."